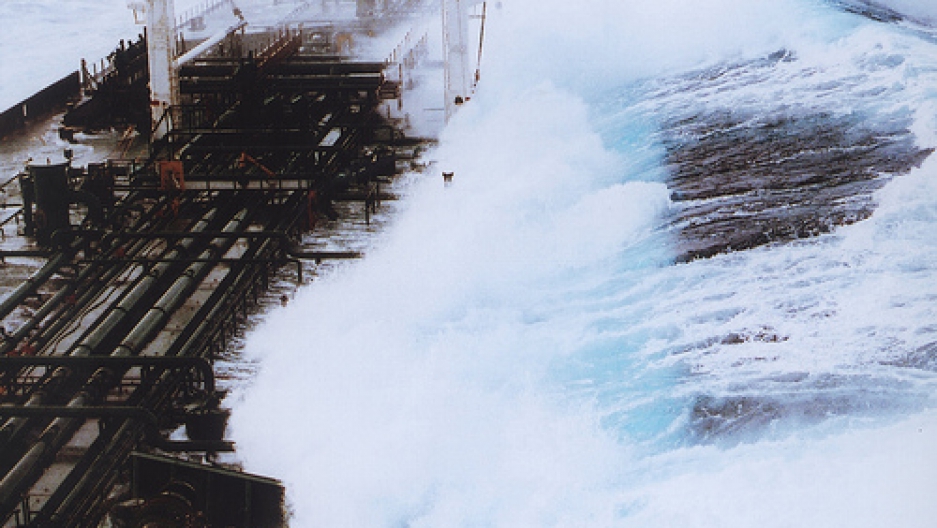 Monster waves that sink ships leaving not a trace or a survivor are the stuff of myth, legend -- and Hollywood. But it turns out they're real. In fact, satellites and ocean tracking instruments show that monster waves are not that uncommon -- they strike a ship about once every two weeks.

Susan Casey wrote about them in her book: "The Wave, in Pursuit of the Rogues, Freaks and Giants of the Ocean." In the interview below, Living on Earth's Steve Curwood interviewed Caseys who says the biggest wave ever measured was taller than the Empire State building:

CURWOOD: In your book, Susan Casey, you tell the story of a scientific ship in the UK that documented these giant waves. Could you tell us that story now please?

CASEY: Yes, the RRS Discovery. I read about this -- and I had to read the article twice to believe what I was reading -- a group of scientists from Britian and Scotland who were out in the North Atlantic and they were hit by about 48 hours worth of 60,70,80,90 and even 100 foot waves. And they were trapped out there in these waves, and almost didn't survive them.

And what was great, not so much for them, but for everyone else, was that the ship had all kinds of state-of-the-art scientific instruments on it, so it was perfectly equipped to capture every measurement of what the ocean was doing. And what they found out and eventually published a paper about was that the models, the meteorological models and the wave models, had not predicted these waves, that they shouldn't have been there, and that in fact, the kinds of really extreme and really freakish seas that had been sort of seen as sailors' tall tales, really did exist. There was direct proof there.

CASEY: Well, in the book, I talk about a wave that happened in 1958 in a very spooky area of the Alaskan coast that was 1,740 feet tall. That's a big wave! (laughs)

CASEY: I think plus some. That is the biggest wave that has been measured accurately. And the reason they were able to know exactly how big that wave was, was geologists were later able to go in and measure where the trees stop. It's like a razor came along and just shaved them all off. And when they were up there, looking into that, they found out that this had happened quite regularly in this bay.

CURWOOD: Now this is all related to landslides and earthquakes, that sort of thing?

CASEY: Yes, and in the book, I talk about several different types of giant waves. In that case it was kind of a localized tsunami. The most dramatic waves that we have here on Earth are caused by big landslides either on the land that then fall into the water, or below the sea and cause tsunamis. And they can be provoked by earthquakes, they can be provoked by a volcanic island collapsing, but those are the really dramatic ones. Those are the ones that re-write the maps.

CURWOOD: Now, one thing that you mention in your book is that the average height of ocean waves seems to be increasing. Why is that? And should we be worried about it?

CASEY: Well, I think that ocean has always been a very powerful and volatile place. And the increase that seems to be happening in waves has to do with a number of different effects. One of them is, are these over-arching climate patterns, and these are really very poorly understood things because we haven't had the ability to measure, you know, long-time climate patterns because we haven’'t been doing it for very long, and we haven't even been around that long when you think of geological time. So, that, the increased wind that comes from a warmer ocean and potentially stormier environment, just caused by climate change ... So, I don't know about worried, but aware, certainly.

CURWOOD: Part of your book you devote to a search for, I guess a surfing holy grail, what, to ride a hundred foot wave?

CURWOOD: Why would someone want to ride a hundred foot wave? It sounds like a death wish to me!

CASEY: I would definitely agree with you. I wanted to find out. I saw a 20-foot wave years ago and had never forgotten how terrified I was when I saw it. And somebody was riding it and I didn't understand how he could survive it. And then, a few years later, they started tow surfing and I saw pictures of some of the characters in my book riding 60 and 70-foot waves, and I was absolutely riveted. I couldn't understand how people didn't die every time they went out.

CASEY: Tow surfing was invented in 1995 as a means to ride bigger and bigger waves. Waves that are bigger than, say, 30 or 40 feet, are not possible for us to paddle into. They're just moving too fast. I described it in the book as trying to catch the subway by crawling. You're just not going to get it, it's just going to go thundering past you. So, the biggest most interesting waves for some of the surfers were in the, what they call the un-ridden realm. And they, eventually, through a sort of painful trial and error, figured out that they could use jet skis to pull a partner onto the crest of the wave. And it could be theoretically, it could be any size wave, it could be a 100-foot wave, but they were doing it with 60 and 70-foot waves with success.

Read the rest of this transcript on the Living on Earth website.