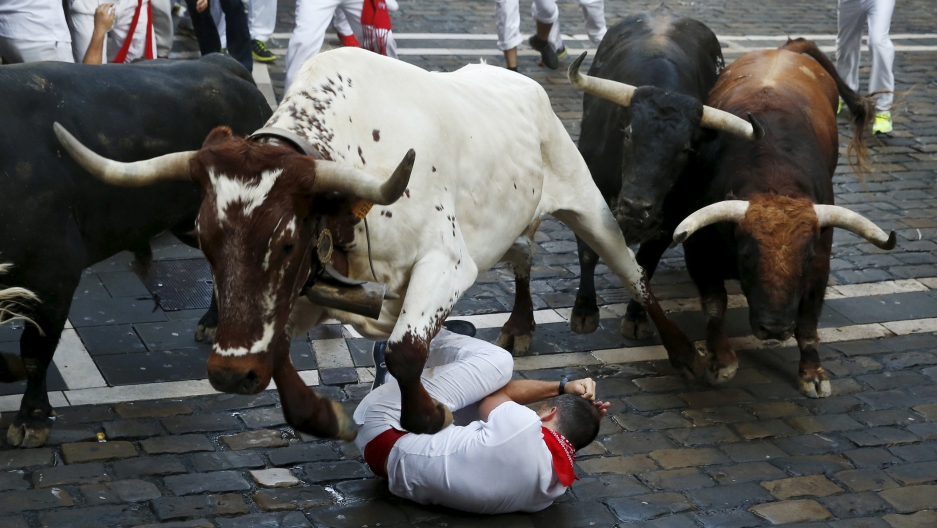 A steer leaps over a fallen runner during this year's festivities. Two people were gored during the run, which lasted about two and a half minutes.

Today, as runners and spectators gather in Pamplona, Spain, for the running of the bulls, one bull is missing.

In 2011, we reported on Mouse, or "Raton" in Spanish, a 700-pound killer bull, was Spain's most famous fighting bull. During his lifetime he killed three people and injured dozens of others in festivals across Spain. His name came from the fact that he was abnormally small when he was born.

Normally bulls with blood on their horns are pulled from festivals because the big beasts are quick studies. Once they figure out how to chase humans down, they don't forget. Actually, they get better and better at it.

But Mouse was a huge money-maker for his owner — and way too popular among aficionados. So he continued his bloody circuit from town to town as thousands of pueblos staged their summer celebrations. Crowds looked forward to seeing the vicious bull with the distincitve white triangle on his forehead.

After the third death, Gregorio de Jesus, his owner, gave in to pressure to retire him. Two years later, after suffering from arthritis, Mouse died of old age at a ranch in Campanar. His owner stuffed Mouse and placed him on display on his farm.

Pamplona's "Running of the Bulls" is Spain's most famous summer festival. But thousands of lesser known Spanish villages also rent bulls each year. For one tense hour the beasts charge around makeshift corrals as the brave and the foolish taunt and tease them. Participants don't kill the animal, they just try to get as close to it as possible — and then scurry to safety.

On Tuesday, two Americans and one Brit were gored, and eight others were injured during the first bull run of the eight-day San Fermin festival. The fiestas are celebrated in honor of San Fermin, who is the patron saint of the region.

For the bull owners, a one-hour festival usually earns them about $1,500. But for Mouse's owner, death brought even more riches. Gregorio de Jesus is earned up to $10,000 per festival during the summer of 2011 with his infamous bull.

"Bulls like Mouse don't come around every day," he told Spanish television at the time. "I think it'd be a good idea to clone him."

As the money rolled in, so did the fans.

"Raton!" screamed a female spectator from edge of a corral at a festival four years ago. "Let's see if you catch someone tonight, assassin!".

Anti bullfighting organizations said Mouse was proof that bull fighting is pure blood sport. They want bulls banned from the summer festivals. But town halls are likely to keep renting the animals, as long as the crowd keeping paying to risk their lives.

"A bull once gave me eight stitches in the scrotum," said a young man one year, after barely escaping Mouse's horns. "I like to tangle with the bulls," he said. "Just as some people like to ride motorcycles. One day you might slip up and fall. And if you do, well, that'd be that."