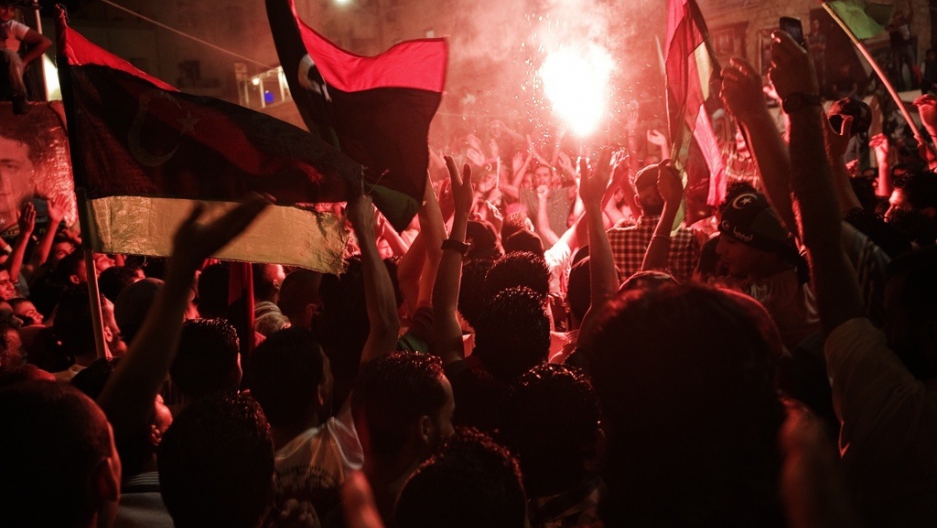 Libyans celebrate the seizure of Muammar Gaddafi's compound on Aug. 24, 2011, in the eastern city of Benghazi.
Credit: Gianluigi Guercia
Share

BENGHAZI, Libya — Tens of thousands of Libyan rebels took to the streets of this coastal city throughout the early morning on Wednesday, firing guns into the air to celebrate a symbolic victory in their six-month civil war — the capture of Muammar Gaddafi's residential stronghold in the capital, Tripoli.

With Gaddafi's once-impregnable Bab al-Azizia compound completely overrun late on Tuesday, rebel fighters in Tripoli set their sites on seizing the leader himself.

An hours-long search in the labyrinth of underground tunnels at the complex, however, turned up few clues as to Gaddafi's whereabouts.

Many rebels now believe he has fled the city to the far reaches of southern Libya to plot an eventual return to power.

But for most residents of Benghazi, where the seeds of this revolution were first sown, the war is already over.

"The fall of Bab al-Azizia means the fall of a dictator," said Essam Agila, 31, during celebrations in Benghazi. "The people of Tripoli — and Libya — have finally been liberated."

Rebels in Benghazi, emboldened by the fall of Gaddafi's Tripoli power base, partied all night and well into the morning, bringing the country's second-largest city to a virtual standstill.

Thousands of vehicles flooded the city's already crowded streets. Excited drivers draped red, green and black independence flags from their car windows. They honked their horns incessantly and to no particular rhythm, yet all seemed to be conveying the same message: "We won."

Young children raced in between the cars at stoplights, launching bright fireworks into crowds of cheering Libyans standing on the sidewalks. The adults, though, did not seem to mind.

"I have already sent two of my boys to fight Gaddafi at the front lines," said Mohamed Abu Bakr, 75.  "If I had more, I would send them to fight for a free Libya too."

In Benghazi’s Martyrs’ Square, the epicenter of the uprising against Gaddafi, people poured in from every direction, singing and dancing their way into the massive, open-air party.

"Bring on your airplanes and tanks, we don't fear you anymore, Gaddafi," sang young children in the square.

Speakers at the podium boasted of the rebels' unprecedented opportunity to create a new, unified and democratic Libya. The thousands below responded with roaring hurrahs, and chanted the Muslim refrain, "God is great," in unison.

At times, the festivities in Benghazi sounded more like war.

Some even set off sticks of dynamite, creating booming explosions that reverberated throughout the city into the wee hours of Wednesday morning.

"Words can't even begin to describe how I'm feeling now," said Abdel Bary, 25, who brought his shotgun with him to Martyrs' Square. "So instead I'm going to fire my gun."

The widespread proliferation of arms following Gaddafi's ouster from eastern Libya did not seem to bother the rebel leadership, which is based here. Like the residents of Benghazi, members of the National Transitional Council (NTC) were too busy bragging about their victory.

NTC officials claimed to control most of Tripoli by late Tuesday. Armed forces loyal to Gaddafi, they said, had laid down weapons in up to 95 percent of the country.

Shamsiddin Abdulmolah, the director of media and communications for the NTC, said that rebels were also advancing on the eastern front, which has been the most static line of the conflict for months.

"We are pushing forward to Gaddafi's ancestral home, Sirte," Abdulmolah said. "Once Sirte falls, the rest of the country will be a done deal."

Officials in Benghazi were hopeful that Sirte would fall within the week, perhaps as early as Wednesday or Thursday. Ras Lanuf and Brega, two strategic oil-refining cities along the eastern coast, came under complete rebel control by Tuesday, according to the NTC.

Independent reports from journalists in Tripoli and elsewhere indicated that small pockets of resistance still remained, however. And the NTC's own credibility regarding information from the fronts came under fire with a botched report of the capture of a Gaddafi son earlier this week.

Hedging its bets, the NTC has been careful to say that the battle for control of Libya is far from over. Many in Benghazi expect that some Gaddafi supporters will maintain the fight, from the shadows if need be, in the hopes of reconsolidating their power.

NTC officials said they have already launched an aggressive plan to prevent a so-called "counter-revolution."

"We have lists of individuals throughout the country that are still loyal to Gaddafi. They will be hunted down and brought to justice," Abdulmolah said.

The rebel leadership is hoping that they, and not tribal factions within their own ranks, will administer justice.

"We expect there to be isolated incidents of revenge killings," said Abdulmolah of the post-victory potential for violence, "but the vast majority of rebel fighters will adhere to their commanders' orders, all the way up the chain."

As the celebrations in Benghazi finally died down at sunrise Wednesday, a few rebels said they were concerned about the future of Libya.

Six months of civil war has claimed thousands of lives, crippled the national economy, and left the security of Libya in the hands of inexperienced citizens — many of whom are otherwise unemployed.

But most worrying for the rebels, Gaddafi's mysterious disappearance leaves open the possibility that the gains could easily slip away.

"We are going to celebrate our victory tonight," Agila said. "But we know that Bab al-Azizia is not the end. It is only the beginning."