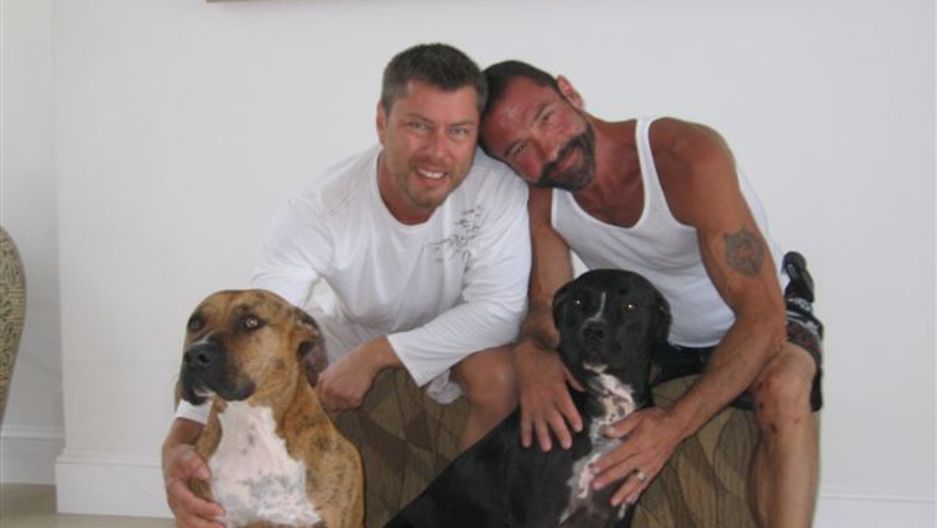 Share
Last week's decision by the Obama administration to have deportation policy focus on criminals rather than law-abiding immigrants may ease many families legal worries. Yet the outlook for some families, especially same-sex couples, is still cloudy. In San Francisco, one gay couple wonders whether the new rules will offer any reprieve, especially as long as a federal law that denies rights to same-sex marriage remains in place. The couple's romance started 19-years ago in a café in Sydney. That's when Anthony Makk of Australia, met Bradford Wells, a tourist from San Francisco after the Mardi Gras party. "I turned and saw him and just started talking to him," Wells said. "We hit it off immediately. Before I left Australia to come back to San Francisco, I knew that this was the man I'd looked for my whole life. Before long, Makk moved to San Francisco to be with Wells. Seven years ago, the couple married in Massachusetts. They now live in San Francisco, in a Victorian house filled with art, two dogs, and a garden filled with tomato plants. "We've just tried to spend time together and be together," Makk said. "That's all we've ever done. But Wells, 55, has AIDS and his health is deteriorating. Today, he's too weak to work. Makk is his husband's sole caregiver. "I help Brad with his day-to-day things, you know," Makk said. "I help him with his lifting, the shopping. Making sure he takes his medication at the right times … things that couples do for each other. Now the couple faces another battle — over deportation. The federal government doesn't recognize the couple's marriage. Makk has maintained his legal status over the years through a variety of visas. But his options have run out-and immigration officials have denied his green card application. The Obama administration's new deportation policy may not help Makk's case. While the new policy recognizes same-sex couples as family-it only applies to people already tangled in the deportation process. That's not Anthony Makk's situation. He hasn't broken any laws-and he hasn't yet received a deportation order. "Staying here under legal status, lawful status has always been work," Makk said. "It's never been easy. It's cost tens of thousands of dollars over the years and lots of stress." Wells is frustrated that his husband's determination to remain legal isn't paying off. "He filled out visa applications that were as thick as a phonebook, documenting everything, every dollar he collected, every dime he spent," Wells said. "It's just devastating to think that the man I've built my life with for the last 19 years was going to be taken away from me-for no good reason at all," Wells said. "Just taken away from me." Makk is appealing the deportation order. Steve Ralls of the gay rights group Immigration Equality says that in Makk's case, the best-case scenario will be if the Department of Homeland Security simply doesn't act on his case as court challenges to the Defense of Marriage Act make their way through the judiciary. But if the government does act, Makk faces the prospect of having to move back to Australia — perhaps without Wells, who's ill and wants to remain near his doctors. Makk tries to remain optimistic: "I think there are enough people out there in a position that can do something that will look favorably upon us," Makk said optimistically. That may not happen soon enough. Makk's legal status expires Thursday.