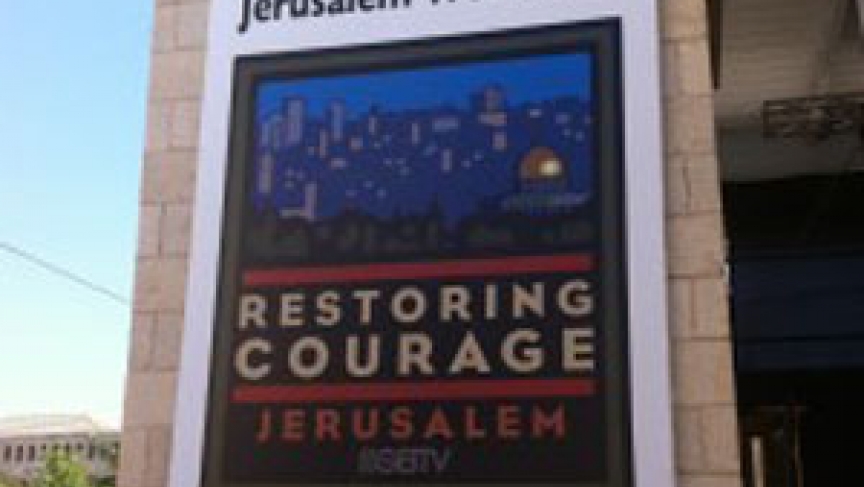 A jumbotron is set up next to Jerusalem's city hall building for people to watch Glenn Beck's rally Wednesday. (Photo: Matthew Bell, The World)

Glenn Beck held a rally in Jerusalem on Wednesday, the culmination of several events that the right-wing TV and radio personality planned in Israel this week.

By chance, I ran into a member of Beck's entourage in Israel a few days ago: the actor Jon Voight. We met in the rocket-damaged bathroom of a school gymnasium in the southern Israeli city of Beersheba. Like me, Voight was there to see the scene first hand. Voight told me Israel made a big mistake when it decided to pull out of lands it had conquered from Arab armies in decades past, and he named southern Lebanon, Egypt's Sinai Peninsula, and the Palestinian Gaza Strip.

"They got back the land, and then they gave it away," Voight said. "I would have instructed them not to. I would have said, 'Don't give it away; who are you giving it to? These people don't appreciate it. They're going to fight you.’ So they gave away Gaza, and what happened? This — this happened."

Voight went on to say that no one should pressure Israel to give away any more land for the sake of peace.

This is the kind of talk that Jonathan Daniels loves to hear from Americans. Daniels is excited to be part of the Israeli team helping out on Glenn Beck's highest-profile visit yet to the Jewish state.

"Glenn is an incredibly unique, decent and truthful human being," Daniels said. Daniels is an adviser to the conservative lawmaker Danny Danon, probably Beck's most prominent supporter in the Israeli government. Last month, Danon invited Beck to speak at the Israeli parliament. Daniels said Beck is a rare example of a powerful media personality who gives full-throated support for Israel.

"If Glenn Beck is our biggest friend, I think we are in a big problem," said Etai Mizrav, with the Israeli group Peace Now. The group organized a counter rally Wednesday against Glenn Beck’s appearance in Jerusalem. Mizrav said he doesn’t appreciate Glenn Beck’s vocal opposition to a two-state solution for the Israeli-Palestinian conflict.

"It's like whoa, hold on a second, we've got a friend. We've got somebody that's willing to take our side and not be afraid of doing that," Daniels said. "This is one of the most influential men in America, willing to stand up and stand with Israel, and we were so glad to be able to embrace that and give him everything that we possibly could."

But there's been no shortage of Israelis who are doing just the opposite. A Facebook group called "Glenn Beck Stay Home" put out a video with some particularly colorful comments by Beck, including one where said that "Jesus would have come back from the dead and made the Jews pay for what they did."

"If Glenn Beck is our biggest friend, I think we are in a big problem," said Etai Mizrav, with the Israeli group Peace Now. The group organized a counter rally Wednesday against Glenn Beck's appearance in Jerusalem. Mizrav said he doesn't appreciate Glenn Beck's vocal opposition to a two-state solution for the Israeli-Palestinian conflict.

Read the rest of this story on The World's website.