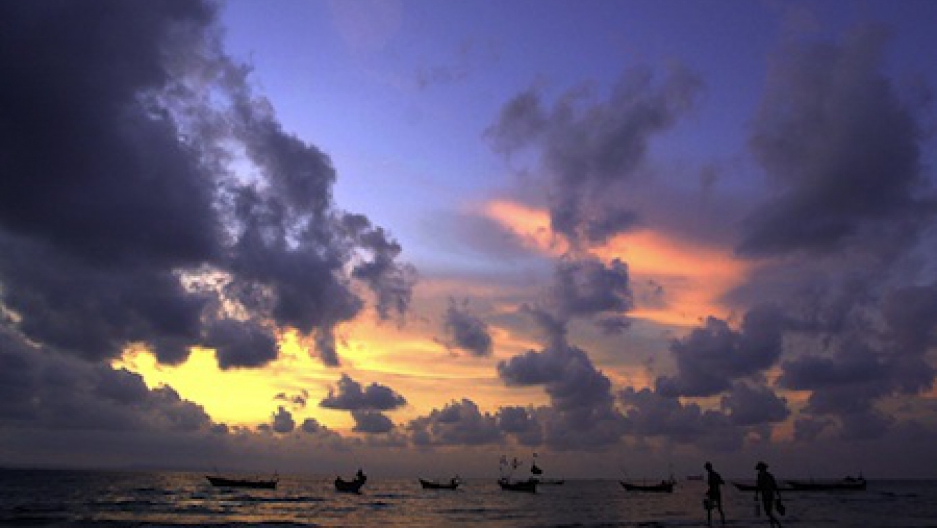 Two fishermen head into the sea off the coast of Sihanoukville, Cambodia.
Credit: PHILIPPE LOPEZ
Share

Where once there was seabed, hotels, a casino and airport rise off Singapore's coast.

But as the tiny island city-state dumps sand on its shores, expanding its territory already by one-fifth, there are increasing claims that Singapore is illegally buying up soil through corrupt channels in Cambodia.

The latest to push these claims is the Associated Press, which reports that foreign vessels were spotted dredging up Cambodian sand for apparent export. The dredging, largely banned in 2009 for eating up Cambodian territory, appears to persist.

An AP reporter tracked or spotted vessels registered in Hong Kong, Vietnam and China dredging in Cambodia. Locals in one coastal province "joked about going to Singapore and planting a Cambodian flag there," according to the report.

A U.K.-based watchdog group, Global Witness, has done the most to expose this practice.

But despite the government's ban, the group said vessels are still scooping up Cambodian soil and selling it abroad with zero benefit to Cambodian citizens.

Rising sea levels throughout the Southeast Asian tropics will likely increase the future demand for sandy soil, dumped along coastlines to reclaim territory.

Thailand is the latest to propose such a project: a controversial and futuristic "new city" near Bangkok built atop marshy muck now under the Gulf of Thailand.