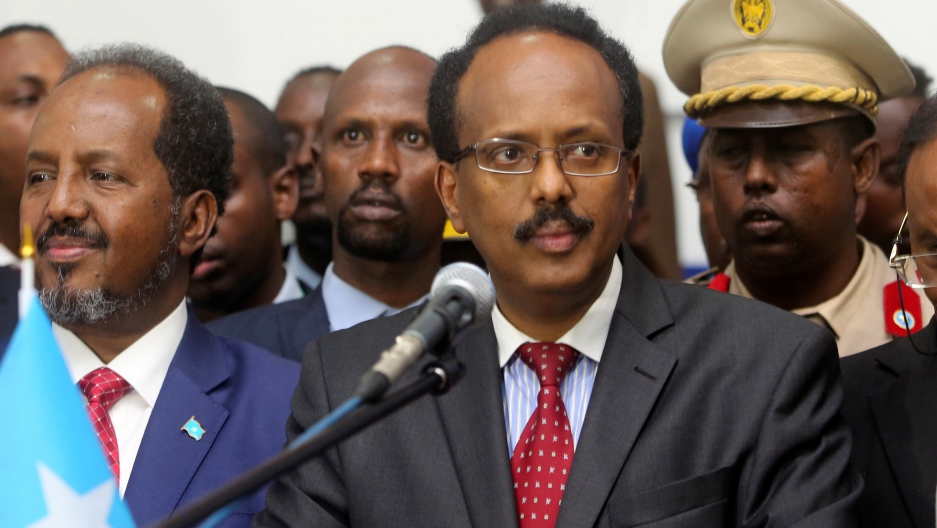 A country in Africa is the starting point for our Geo Quiz this time: We're talking about Somalia, in East Africa. The country has no functioning national government. In fact, it hasn't had one for the two decades that it's been immersed in a brutal civil war.

But Somalia does have a transitional government which controls some territory. Until recently, it's prime minister was Mohamed Abdullahi Mohamed. He resigned after a few months and is now back in the city he's called home for over 20 years. He works there for the local State Transportation Department. So where is that?

Last fall, Mohamed was working as a New York State civil servant when he got a call from Mogadishu. Daniel Robison of station WNED in Buffalo has the rest of the story.

That means he's in Buffalo, New York — which is the answer to our Geo Quiz today.

Last fall, Mohamed was working as a New York State civil servant when he got a call from Mogadishu.

It's not easy being prime minister of Somalia. The East African country has gone without a functioning government for 20 years. It's plagued by poverty, warlords, Islamic militants and now, a famine. Mohamed was an unlikely candidate, working at the New York State Dept. of Transportation in Buffalo.

"Until I get a call from Mogadishu to come for an interview with the president. Honestly when I went there I wasn't thinking I'd be the next prime minister,"

Neither was anyone else, says Ken Menkhaus, a Somalia expert at Davidson College.

"Well, my first reaction was to look him up and to learn more about who he was,"

What Menkhaus found was a soft spoken 48-year-old administrator who'd left his native Somalia about 20 years earlier. Mohamed was active in the Somali community in New York, but that didn't exactly make him prime minister material.

Mohamed's unexpected rise to power came after an introduction to Somalia's president, who was visiting the US. Mohamed apparently made a good impression — less than a month later ... he left his wife and four young children in Buffalo, flew to Somalia and was sworn in.  Menkhaus says Mohamed instantly became a target.

Mohamed could have been the next casualty.

"Bullets reached my office on many occasions. That's normal. That was normal."

A weary Mohamed appeared before the United Nations last January. He was pressed on how he would stop the spread of terrorism in Somalia and the pirates that patrol its shores.

"I have been in office for, as a matter of fact, forty-nine days as of today. And we have been in preparation to strategize when and how we're going to face our enemies."

As prime minister, Mohamed appointed a new cabinet and worked 15 hour days. He's credited  for finding a way to pay the country's military on a regular basis for the first time in years. Mohamed says he tried to apply his experience in state government to Somalia's notoriously corrupt and dysfunctional system.

"I wanted to bring the good things I learned from here to Somalia. Everybody should work from 9 to 5 and get paid. And to earn honest living. To work hard. And to be honest,"

But just nine months into his term, Mohamed was pressured to resign by the speaker of the Parliament and the president. He says it's because he opposed a plan to delay elections scheduled for this fall. People on the streets of Mogadishu came out to support him.

Crowds chanted Mohamed's nickname "Farmajo" while he rolled by in a tank, pumping his fist.

"I could see their emotion was very very high. They were chanting "Hagulesto Farmajo" meaning 'Stay in office. You will ultimately prevail,'" [

But he didn't prevail.  He stepped down in, he says, so the government could focus on Somalia's growing famine — an estimated 30,000 have died this year alone. Ken Menkhaus says Mohamed's departure was a loss for Somalia.

"He emerged as a symbol of everything that Somalis are frustrated with. That there are people of good will, like him, who are trying to do the right thing in Somalia. And they are constantly being sacrificed on the altar of political calculations,"

Now, Mohamed is back to work as a regional compliance specialist at the NY Department of Transportation. His job is to make sure minority contractors get their fair share of bids. He says there are some similarities between the two jobs.

"One you are heading a nation, one you're a bureaucrat and civil servant. Both jobs have a purpose. Both jobs are there to help people,"

Mohamed's says he's happy to resume his quiet life in Buffalo, where he isn't followed by bodyguards or crowds on the street. He's proud of his short time in office, but says he failed in his top goal: to make the country safe enough for his wife and kids to live there.