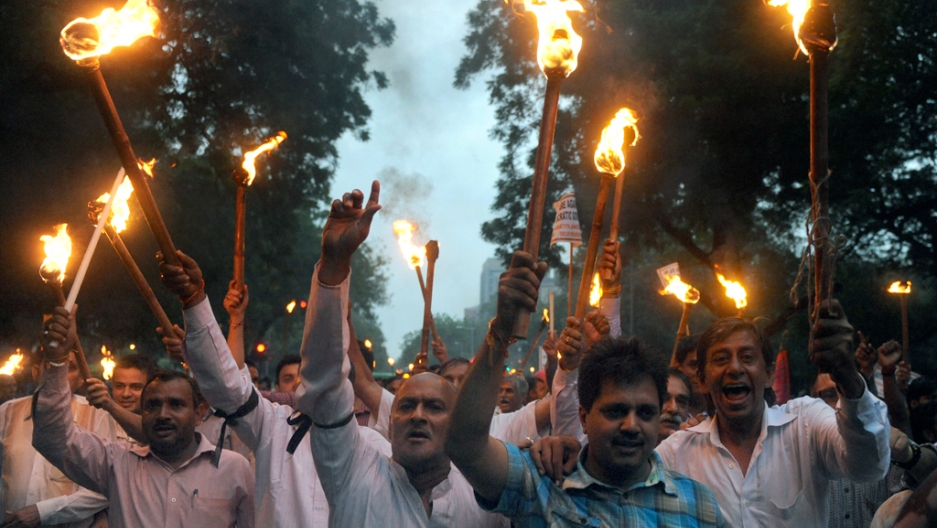 NEW DELHI, India — Tens of thousands of protesters rallied across India on Monday, as social activist Anna Hazare's indefinite fast against corruption entered its seventh day and the government scrambled for forge a compromise.

But by focusing so narrowly on the nuts and bolts of the bill, the protest leaders, and the politicians they oppose, appear to be missing the forest for the trees.

No law will ever be enough to root out corruption from Indian society. But the mass movement itself — whether it is democratic or anti-democratic — may offer the germ of the broad cultural change needed to accomplish what no supercop could do. That is: Make corruption, which has always been illegal, also socially unacceptable.

The government has already capitulated to Hazare's demand for an anti-corruption law and his insistence that members of his coterie be included in the drafting process — though some objected that this granted undue influence to “representatives” who had never stood for an election. But now that members of parliament have developed a draft bill to create the anti-corruption office, Hazare is again fasting in protest because the government's draft does not grant the ombudsman power over the prime minister or the judiciary.

More from GlobalPost: The irony of anti-corruption in India

No doubt there are merits in the arguments of both sides, however wrapped up in the abstractions of “democracy,” and “the constitution,” they may be. But the nuts and bolts of the ombudsman law are immaterial when it comes to its actual purpose. India's weakness has always been in enforcement, not in legislation.

Corruption is so pervasive that the ombudsman's staff would have to be as large as the bureaucracy it is intended to police in order to sort through the reams of complaints it would have to process. And there is precious little to suggest that the regulatory superstructure would be any more inclined to honesty than the bureaucrats it's charged with monitoring — other than the fantasy of officers whose reputations are “above suspicion.”

Yet there is still promise in the Annapalooza under way at New Delhi's Ramlila Ground — which is usually reserved for annual dramatizations of the Hindu epic Ramayana. With the atmosphere of a rock concert crossed with a religious revival, Hazare's movement has encouraged India's much-maligned middle class to engage with the political system — though the crowd thinned with the end of a three-day holiday weekend on Tuesday. And, however naïve their us-versus-them formulation — which holds “the politicians” alone responsible for the corruption that plagues the country from top to bottom — Hazare's people have established a beachhead for morality where there was none.

And that could be where the beginning of a solution is to be found.

The “corruption” evoked at Annapalooza is nebulous and generic — drawing no distinction between the bribe accepted by a policeman to overlook a traffic violation, the side payment that an official at the passport office demands before he will process your documents, and the kickback paid by a company in exchange for a government contract (or telecom license). The common citizen is held to be a helpless victim of a grinding system where everybody is on the take, and the reviled politicians are held to be responsible for every link in the chain, as though every bribe ended up in some member of parliament's pocket.

But there is a vast difference between the bribe extorted from a citizen who is only asking for something he is due, like the grain allotted to below poverty line families by the public distribution system, and the bribe paid to jump to the head of the line or to get away with disobeying the law. If you get stopped for a traffic violation, the cop will take less than half the amount you'd have to pay for the official fine. If the building inspector finds a violation, his bribe will miraculously work out to 10 percent of the cost you'd have to pay to get up to code. And if you're compelled to bribe the telecom minister to get a license, well, you can bet the bribe amounts to a lot less than the money it saves you.

Through blurring these distinctions, Hazare has brought India's normally apathetic middle class onto the streets. But he will have to make clear what's really at stake if his mass movement is to have any impact. Passing another law or creating another regulator will be useless unless Hazare — who has made Gandhi his model — can convince his followers to emulate his idol, too. Because the first step in ending corruption will mean waiting in line, following the rules, and paying the fine.