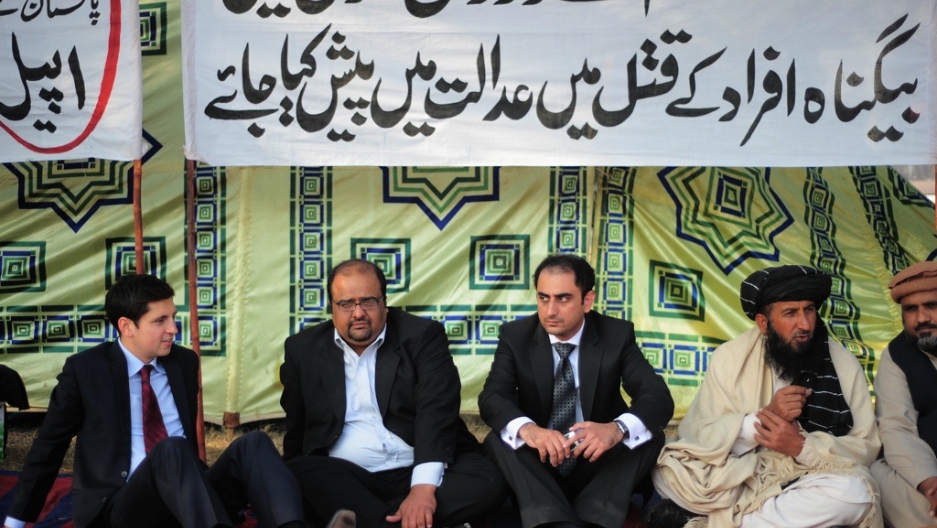 ISLAMABAD, Pakistan — Until some years ago, lawyer Mirza Shahzad Akbar never gave much thought to the drone strikes.

“I read the newspaper. It said that drone strikes kill militants. Okay,” he said, shrugging his shoulders. “And I would close the newspaper.”

Even when his American friend began to research civilian casualties caused by drone strikes and military operations in Pakistan and Afghanistan for a nongovernmental organization, he didn’t take him seriously.

“I used to joke with him: You’re a spy? What are you doing here?” he said.

But over time, the stories his American friend told Akbar about the victims of the drone attacks, his interest began to peak. He started researching the legal aspects of drone strikes and then he met Kareem Khan, who lost a brother and a son in a drone attack.

“I wanted to interview him, but he was interviewing me. He asked me if anything could be done. I said yes.”

Other lawyers had told Khan that it was impossible. “Kareem asked if I was interested in taking up his case. I said, oh I don’t practice human rights. Then he said: you’re a lawyer and you are the only person who said ‘I can do this’.”

So Akbar agreed to take up Khan’s case and, now, four lawyers from the organization Reprieve who are American and British, along with two Pakistani lawyers and two Pakistani social scientists are helping him.

His law firm wanted Akbar to file the case in his own name. “The next question was who to sue,” he said.

In Pakistan’s tribal areas the regular laws do not apply and there are no courts or police stations. “We needed somebody from the U.S. embassy who was in Islamabad so we could file the case there. There is only one person who’s the weakest link. That is the CIA Station Chief,” Akbar said.

A local journalist gave Akbar the name of the chief and on Nov. 29 last year, Akbar served Jonathan Banks, CIA Station Chief for Islamabad, Robert Gates, then U.S. Secretary of Defense and Leon Panetta, then CIA director, a legal notice for wrongful death through the U.S. embassy. Two weeks later, on Dec. 13, he filed a complaint against Banks for murder at a police station covering the diplomatic enclave where the U.S. embassy is based. Three days later Banks left the country, reportedly because of security concerns.

But Akbar said he was fleeing the possibility of prosecution.

Now, eight months later, Akbar represents more than 50 Pakistani drone victims, from children to teachers to tribal elders. They hail from North Waziristan, a rugged tribal area bordering Afghanistan. It is where groups such as the militant network of Jalaluddin Haqqani are believed to launch attacks on Afghan, NATO and U.S. forces in Afghanistan. The Pakistani Taliban is thought to be there as well.

But Akbar says his clients are innocent.

Last month Akbar filed a complaint against John A. Rizzo, who was general counsel for the CIA until June 25, 2009, for murder, injury and other crimes against Pakistani citizens, including Khan and the 7-year old child.

“At the CIA, one of his roles was to approve a list of persons to be killed every month in Pakistan by the CIA using Unmanned Aerial Vehicles,” says the complaint filed by Akbar. It also wants the police to request Interpol and the United States to enforce an arrest warrant for Rizzo.

So far the police haven’t formalized Akbar’s complaints. If by mid-September this is still the case, Akbar said he would ask the court to order the police to do so. Akbar thinks the courts will adhere to his request, but it will place the police in a tough position.

But some are skeptical about the viability of Akbar’s complaint.

“Let’s say that he does get that complaint against the CIA chief formalized, the U.S. will say he has state immunity. The victims will get nothing,” said Ahmer Bilal Soofi, a Pakistani international law expert. He suggests the use of the Alien Torts Claims Act that allows foreign citizens to file human rights cases in the United States for conduct committed in foreign countries.

“The Alien Torts Claims Act hardly gives any rights to a non-U.S. citizen against the U.S. government and that’s why we’re not suing under this Act,” he said. And immunity can only be claimed for heads of state and diplomats, but the people mentioned in the complaints are neither, Akbar says.

“The real point is, no one else is helping them and someone has to do it.”