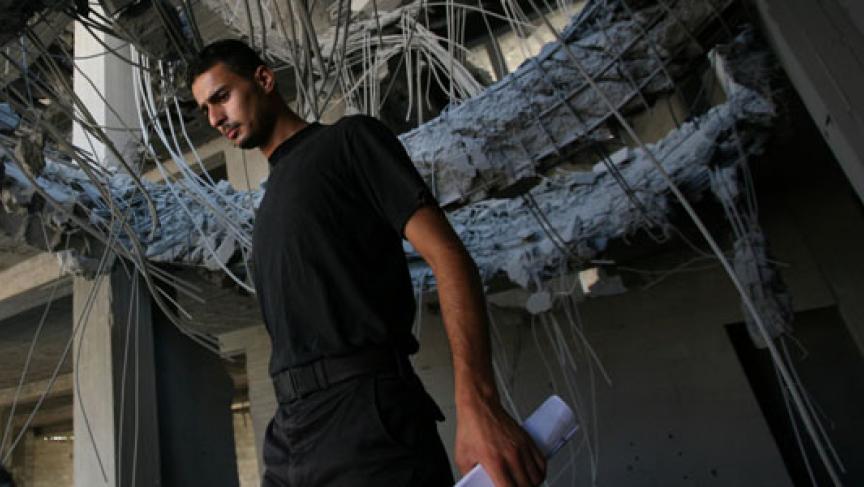 A Hamas policeman walks past a damaged government building after an Israeli air strike in Gaza August 19, 2011. Israeli aircraft struck Hamas security installations in Gaza on Friday, killing at least one Palestinian, in further retaliation for attacks along the Egyptian border in which eight Israelis died. photo by Wissam Nassar.

Share
After several days of escalating violence between Israel and Palestinian militants in the Gaza Strip, things started to calm down Monday. This will be welcome news to many residents of Beersheba. Beersheba is a city of about 200,000 people. Israelis know it as the capital of the Negev desert region. Around dinnertime Sunday, a city street lined with restaurants and cafes was unusually quiet. The manager of a burger place told me business was down by about 50 percent. But he didn't want to talk about it on tape. He said he didn't want to give Palestinian militants in Gaza the satisfaction of knowing the rocket attacks were having an impact on life here. Israeli officials are giving lots of credit to the newly deployed "Iron Dome" anti-rocket defense system. It is high-tech missile system that shoots down medium range rockets in mid-flight. One of the Iron Dome missile batteries is set up outside of Beersheba. Standing next to a school gym that was hit by a rocket on Sunday, city spokesman Yishai Avital explained how the attack happened. "The missile that hit the school here was among four others that came together," he said. "Four rockets were shot at the same time. Two or three were intercept by Iron Dome and this one hit." "The rate of success is okay," he said. "It's around 40, 50 percent at least." This is not the first time Beersheba has been targeted by rockets from Gaza. Avital recalled the last time, in late 2008 and early 2009, during Israel's major offensive in Gaza named, "Cast Lead." Avital said this time around, the rocket barrages have been more intense, even with the added protection of Iron Dome. "In the last three days, Beersheva got around 30 different rockets," Avital said. "The intensity of the fight this time is much, much higher compared to two and a half years ago." Avital said no one was hurt at the gym, but that is only because the mayor of Beersheba decided to cancel school orientation at the last minute. Down the road, however, one person was killed when another rocket hit right next to a suburban home, causing massive damage. Next door, Eli Damri was starting to clean up the mess at his parent's house. No one was home when shrapnel tore through walls, furniture and appliances. But the family's German Shepherd was killed. "In my opinion," Damri said, "Israel is always reacting to these attacks. We need to take the initiative and put an end to this." Some Israeli politicians echoed that call for more forceful military action. But Prime Minister Benjamin Netanyahu appears to have decided against launching a large-scale military operation in Gaza. Egypt and the United Nations played a role brokering an unofficial ceasefire. It has not been an airtight agreement. But both the Israelis and Palestinian militant groups are sending signals that they will adhere to a ceasefire. So in Beersheva, things are quiet for now.