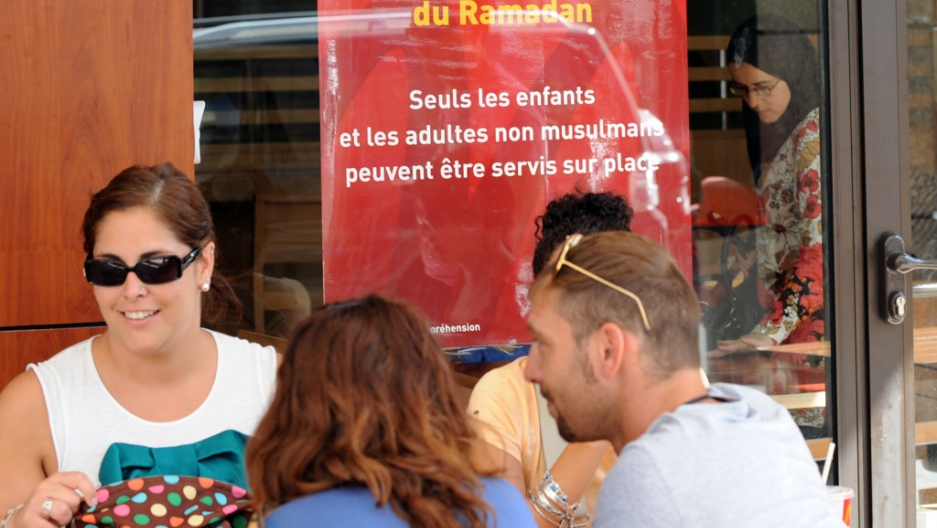 Non-Muslims eat lunch on the terrace of a McDonald's in Rabat, Morocco, in front of a sign which reminds customers that Muslim adults are forbidden from being served at the restaurant during the day during the month of Ramadan. The sign says only children and non-Muslims will be served. In practice it means that Western foreigners will be served. Some Moroccans are campaigning for the right to eat in public during Ramadan and other secular freedoms.
Credit: Abdelhak Senna
Share

CASABLANCA, Morocco — The slogan displayed on the profile pictures of hundreds of Moroccan Facebook users was stark: “In Morocco, Eating Kills.”

The message referred to the incident two years ago when six Moroccans were arrested for having a picnic during Ramadan in protest of a law banning eating in public during Ramadan.

During the Muslim holy month of Ramadan, the debate over the introduction of more secularism is again in the spotlight because of Article 222 of the Moroccan Penal Code: It mandates a one to six month prison term for anyone "well known for their affiliation to Islam" who breaks the fast in public.

As a result, Moroccans who are non-practicing Muslims are obligated to respect the fast in public, while others escape abroad to avoid the restrictions.

"I am fortunate to live abroad because during Ramadan, Islam is forced upon people regardless of their beliefs,” said Habib, a 27-year-old engineer who lives in Paris. “To most Moroccans, being Muslim is not a personal choice of faith but the identity of an entire community that one is obligated to be a part of.”

MALI ( the acronym in French for Alternative Movement for Individual Liberty), the group that held the protest picnic, was formed in 2009. It campaigns for more individual freedoms. Its members have been arrested and intimidated by authorities and members of the general public since launching their first action, the picnic.

“It was not Ramadan that was 'targeted' but instead, we demanded freedom of religion and conscience, the freedom to believe or not, to practice or not, to be a Muslim or not," said Ibtissame Lachgar, 36, the co-founder of MALI and a political activist. “It is a spiritual choice that is personal and individual. We wanted a symbolic action that can really point the finger at the contradictions between the law and international treaties ratified by Morocco.”

Morocco's current political system is not compatible with the establishment of a secular state following the Turkish model, said Pierre-Jean Luizard, a historian and researcher at the National Center for Scientific Research in France.

“Morocco is a special case since the king is also the Commander of the Faithful," he said. "The Moroccan political system is based on the religious legitimacy of the sovereign, which gives secular claims a revolutionary character, and which is not the case in other Arab states. However, this does not mean that secularism is an absent claim as a value, with its corollaries: equality of citizens, freedom of conscience and religion and women's rights.”

One element that Morocco shares with other Muslim countries is that Islam, having been the main framework of anti-colonial struggles, became the language of the society, said Luizard. “What can be perceived as the conservatism of an entire society is also a reaction against the West and against overbearing authoritarian and corrupt regimes — like Morocco — supported by the West itself,” he said.

Abdelillah Benkirane, the leader of the main opposition party, The Islamist Justice and Development Party, condemned demands for a more secular state during a meeting in June, a few days before Morocco’s ruler, King Mohammed VI, introduced the new constitution to the people.

“They want to pervert the faith of this nation and Ramadan to no longer be sacred," he said. "They want to picnic during the holy month and set an example for young people, for your children. It seems that future reforms will restore 'sexual deviance' [homosexuality] — we may see people who say publicly that they are 'sexual deviants'."

Benkirane warned his audience that establishing more religious freedom in a new constitution would threaten the country’s foundations. "If the king adopts it, we will have a serious problem," he said. "Morocco is a Muslim state, and the country’s religion is Islam.”

But an ideological commitment to secularism on the part of the state is not necessarily a prerequisite for democratization, according to Elizabeth Shakman Hurd, a professor at Northwestern University specializing in religion and politics.

“There are many, many modalities for managing and negotiating across lines of religious difference, both historically and today, that do not fly under the flag of the doctrine of secularism,” she said. “Advocates of democratic change, wherever they find themselves, would do better to work for a deep pluralism that engages both 'religious' and 'secular' views conventionally understood rather than boxing themselves in with a commitment to secularism.”

Other Moroccans, like Sara, a 19-year-old student from Marrakesh don’t feel too concerned about the lack of religious freedom. “Except the other day when I tried to eat at Mcdonald’s in Marrakesh: I was asked to leave or they would call the police,” she recalled. “They told me they couldn’t let me eat there unless I proved I wasn’t Muslim. I asked myself right away, how do you prove such thing?”