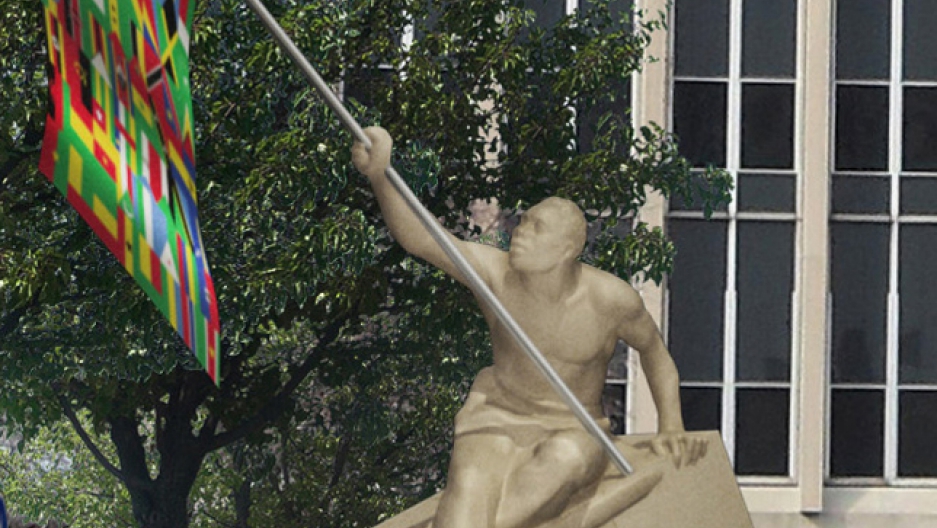 A work of public art is causing a stir in Indianapolis -- and it hasn't even gone up yet. The dispute involves a monument of a freed slave that was supposed to be placed in downtown Indianapolis. The work, "E Pluribus Unum," is by the celebrated African-American artist Fred Wilson.

Wilson based his figure of the freed slave from the city’s Soldiers and Sailors Civil War Memorial, made in 1902. Positioned at the base of the older monument, the man is shirtless, sitting down and holding up a flag.

Wilson, who is known for recontextualizing existing art objects, tells Studio 360's Kurt Andersen that he wanted to replicate the figure but give him a prominent place of his own nearby, "so that he is a person, he is a man, and he can represent something else, something positive."

But some in Indianapolis' African-American community don't see it that way. In the last year, opponents have organized, protesting the work at civic meetings, in the media, and recently at the State Capitol.

One opponent is longtime state representative Bill Crawford, who says that Wilson's statue -- intended to correct stereotypes -- instead perpetuates them.

"As long as we keep looking back to what we were," Crawford says, "we are never going to be what we ought to be and what we're going to be."

Read the rest of this story on the Studio 360 website.