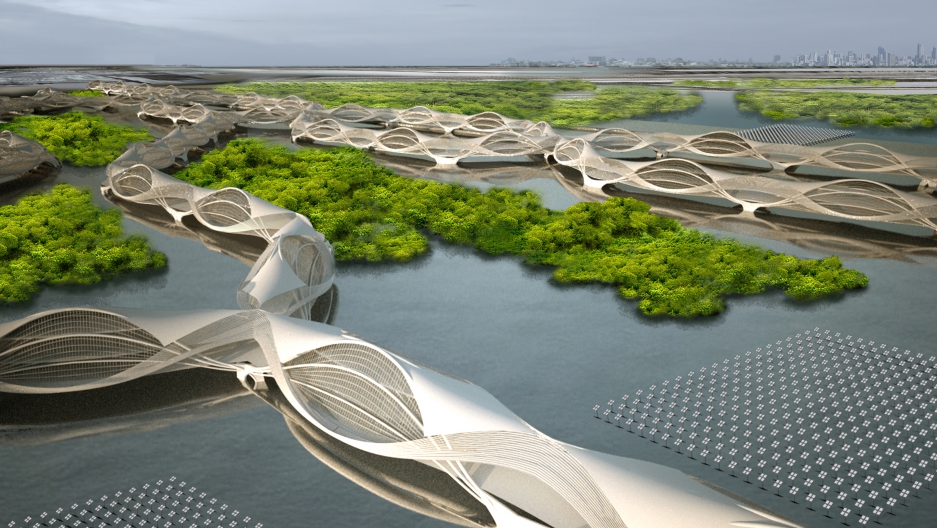 A proposed “Wetropolis” development by Thai architect firm S+PBA suggests placing condos, shops and roads inside elevated steel tunnels. Warnings that Bangkok is sinking into the sea have prompted the government to plan a massive seawall and “modern city” on land now submerged under the Gulf of Thailand.
Credit: S+PBA
Share

BANGKOK, Thailand — For years, Thailand’s top disaster guru has sounded an apocalyptic warning: the sea is rising, Bangkok is sinking and the coastal metropolis will sit under five feet of water by 2030.

The only bulwark against this scenario is a $2.8 billion dyke sealing off Bangkok from the sea, so goes the refrain of Smith Dharmasaroja, head of Thailand’s National Disaster Warning Center.

But a plan to do just that, elevated from obscurity by Thailand’s new government, is getting creamed by environmentalists, experts and fishermen alike. Even Smith, who has pushed the idea on politicians for years, believes the plan’s latest incarnation is mostly fantasy.

“Impossible,” he said. “The plan has to be abandoned.”

Elected last month, Thailand’s ruling Pheu Thai party ran on promises to erect an 18-mile long seawall to save Bangkok from flooding. That proposal, and its drastic effects on the environment, are controversial enough.

But the party is pairing the dam plan with a vow to pull off an extremely ambitious engineering feat: erecting a modern “new city” behind the seawall.

“We don’t have to save money to build the dam and fill in the sea,” according to a policy brief from the party. “We’ll get 300-square kilometers (115 square miles) of new land” that can be developed and sold at a profit. “We could have various city centers, industries that don’t have to pollute in a city that considers the environment.”

The seawall, Smith said, is still Bangkok’s only salvation. “I’m still worried about the 16 million people in Bangkok, where roads will be covered with water, where hospitals will be flooded, where tourists won’t be able to come.”

But a futuristic city rising from the gulf? “It won’t work,” he said. “Under the water, it’s all soft mud. You can’t build anything on that.”

There are precedents, however, for both fending off the sea and reclaiming land. The Netherlands, perhaps the world’s premier dam builders, have erected complicated dykes to spare low-lying Amsterdam.

The oil-rich United Arab Emirates has expanded territory by creating entire islands in the Persian Gulf. In nearby Singapore, the tiny, affluent city-state grows its territory by dumping tons of sand on its shoreline.

But environmentalists insist that there’s no feasible way to set buildings atop the foundation of soupy muck off Bangkok’s coast.

Nothing short of a huge, reinforced platform built above the sea would suffice, said Anond Snidvongs, director of the Southeast Asia Regional Research Center. “That’s if you want that area completely dry all the time, no matter the tide.”

More from GlobalPot in Thailand: The Dog Meat Mafia

The layer of high-rise condos, pavement and factories in and around Bangkok is hastening Bangkok’s descent into the sea. All that weight pushing down on the soft soil underneath — along with global warming, which elevates sea levels — are the culprits behind the city’s sinking woes.

Take a look at Thailand's sinking coastline, click and drag to interact:

In the urban sprawl closest to the Gulf of Thailand, frequent flooding already leaves homes submerged and taxis slogging through deep waters. One Buddhist temple, whose monks refused to cede to the rising sea, is suspended above the sea and accessible only by a long network of planks.

A particularly nasty flood could cause more than $1 billion in damages to Bangkok and surrounding areas, according to a World Bank study. As the clock ticks towards 2050, and Bangkok continues to sink, a disaster flood could destroy $4.5 billion worth of property and wreck the nation’s economy, according to the study.

More construction, particularly in a zone already beneath the waters, would compound the problem, Anond said. “Most people debating over this area are not using good scientific information,” he said. “It’s sometimes based on imagination.”

However, a victorious political party vowing to fix the problem — their campaign urged voters to “Say Goodbye to Flooding!” — suggests the Thai public is taking the crisis more seriously.

If not a massive seawall, financed by selling off property in a new-wave aqua town, then what?

At least one Bangkok architectural firm is promoting a “Wetropolis,” a network of steel-and-glass tunnels hovering above the sea. “Almost 300 years after rising from the marshy banks of the Chao Phraya (river), it appears Bangkok will return to its watery origins,” goes the firm’s pitch. “Do we sink or swim, flee or float?”

The designers of this project, Ponlawat Buasri and Singsuda Adhibai of the firm S+PBA, insist their plans are not science fiction and rely on current technology.

Their self-described “aquatecture” settlement would eliminate the need for a seawall and dumping acres of soil into the water, Ponlawat said. They imagine a tunnel maze of condos, car-ready lanes and shops, fed energy by solar panels and supplied by traditional Thai floating markets in the waters below.

“Instead of some high-density project, why not make it more open and loose?” he said. “I don’t have a price tag for it, but it’s better than wasting money on structures that the soil can’t withstand.”

For now, there is little consensus as to whether a seawall, a dam-protected city or even a Wetropolis is the answer to Bangkok’s flooding dilemma.

Anond recommends no particular solution, only that the government devote top expertise to a study that’s totally transparent. Smith has registered his worries to the new government, he said, but hasn’t heard back.

A view of Thailand's sinking coastline, click and drag to interact:

(At the seaside Khun Samut Jeen temple, monks have raised the main sanctuary's floor until the windows are at ankle-level. Pailin Wedel/GlobalPost)

Environmentalists are also protesting the would-be seawall’s effects on fishermen, shrimp farmers and rare wildlife living in the gulf.

But perhaps they shouldn’t fret. The new government is already shrinking from its proposal after winning the election. According to Plodprasop Surawasi, the Pheu Thai party’s deputy leader, the seawall will only be built if it’s deemed feasible by studies that would take up to a year to complete.

“You might have to wait a while for more information on this project, the reclamation of land,” he said. “We know very well how the (non-governmental organizations) are feeling.”