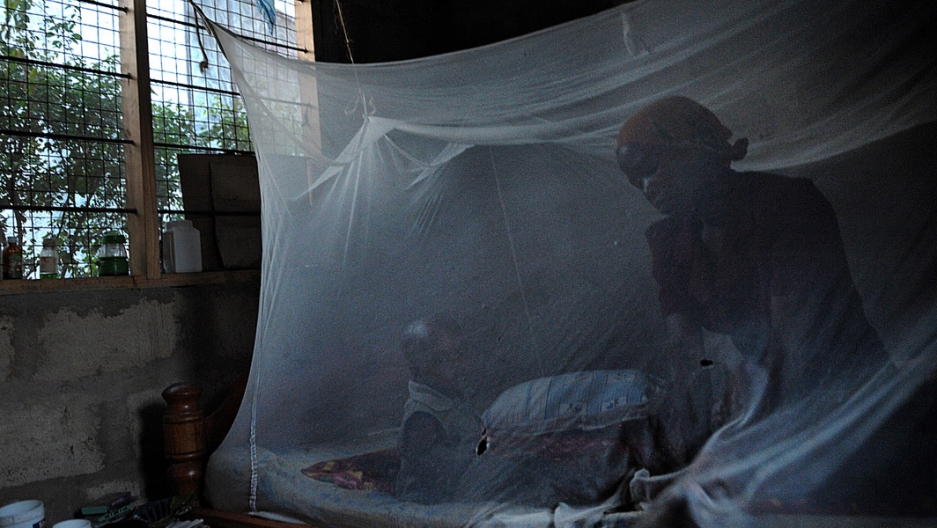 A mother and her child sit on a bed covered with a mosquito net in Tanzanian where a pioneering vaccine against malaria is in being tested at the government-run Ifakara Health Institute.
Credit: Tony Karumba
Share

It was while standing naked in a room full of mosquitoes that Bart G.J. Knols, a Dutch entomologist, discovered that the insects were drawn to foot odor. The experiment was designed so that Knols could examine mosquito behavior; he wanted to learn where they would bite.

The information has proven valuable; the Bill and Melinda Gates Foundation granted over $775,000 to a colleague of Knols who is designing an outdoor trap to lure mosquitoes away from humans.

This isn't the only good news in malaria fighting this summer. Last week, researchers in Italy and the U.K. announced that they had successfully genetically altered male Anopheles mosquitoes to be sterile. The Anopheles mosquito which is responsible for carrying the malaria parasite, would still produce seminal fluid. As female mosquitoes only mate once in their lifetime, this innovation would result in sterile eggs.

These ideas, if successfully executed, will complement the already existing malaria prevention methods used today.  These methods range from long lasting insecticide treated bed net and indoor residual spraying of insecticides to rapid diagnostic tests, and increases in trained health workers. [Update: A new study shows that these methods may not be as effective. Read more]

The U.S. government, which has pledged $1.625 billion dollars as part of the President's Malaria Initiative, has been instrumental in the scale-up of these resources. Since 2005, when President Bush launched the program, over 30 million bed nets and more that 25 million rapid diagnostic tests have been distributed in the 15 focus countries.

The approach has worked; according to the World Health Organization, deaths due to malaria are decreasing. Between 2006 and 2008, 9 African countries including Tanzania, Ethiopia, Rwanda and Ghana, have cut malaria deaths by 50 percent. However, it is estimated that 800,000 people still die from malaria each year, most of whom are children in Africa.

The U.S. is the second largest funder in the fight against malaria: