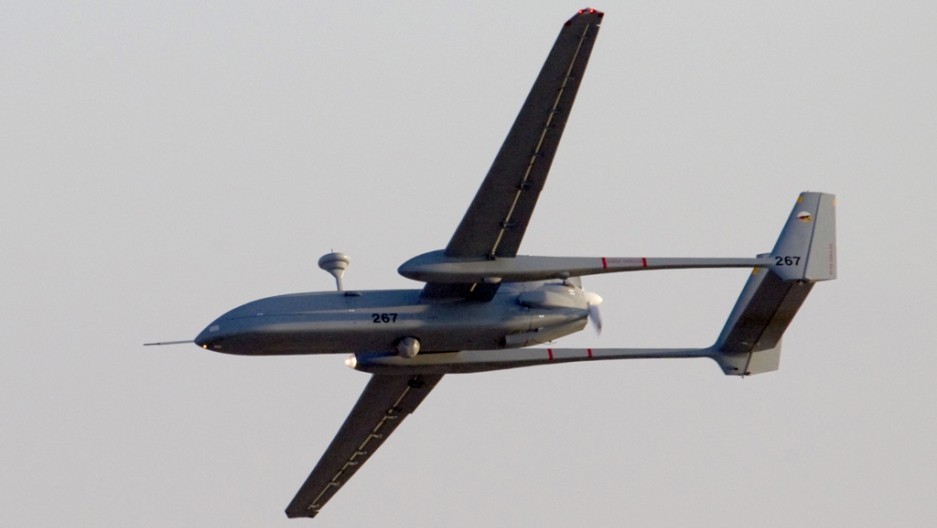 The US State Department has confirmed it is operating surveillance drones over Iraq, a program for which Iraqi officials say it has not sought authorization. In this picture, an Israeli UAV Hermes 500 flies over the Hatzerim air force base in the Negev desert on June 30, 2011.
Credit: Jack Guez
Share

Forget about China's first aircraft carrier, the U.S. military has a whole new reason to be scared.

At the world's largest robotics show in Washington this week, China debuted the F50 — a small drone the size of a pizza pan that comes equipped with a high-def camera.

Now, lots of countries have drones, or Unmanned Aerial Vehicles (UAVs). The U.S. has drones, Israel, Brazil and Iran.

All they are, really, are anything that flies autonomously or by remote-control. By that definition, you can even buy a drone at Brookstone (it's called a Parrot).

Nor is the news shocking. There were hints of what was to come in November, when China showed 25 drone models at the Zhuhai air show.

But the takeaway is nonetheless significant. Competition among drone developers is growing fierce, and we're likely to see the technology advance at a heightened pace in years to come.

While most drones are used for surveillance purposes, and the commercial applications there aren't lost on the business world, there are also drones that kill people.

And developers around the world are working on making drones in general lighter, smaller, more powerful and more able to stay aloft for longer periods of time.

Military analysts have suggested that China is focused on capabilities that could threaten U.S. military vessels in a confrontation over Taiwan. The most recent Defense Department report to Congress on China's military capabilities notes Beijing's push to develop longer-range unmanned aircraft, including armed drones, "expands China's options for long-range reconnaissance and strike."

But the brochure for the drone, which is made by the Shenzen-based AEE Technology Co., shows an overhead image of protesters hemmed in by riot police.

That, combined with recent protests in Dalian and Guizhou, as well as the onset of a government crackdown in Xinjiang, suggest that China's goals may be just as focused on domestic security.