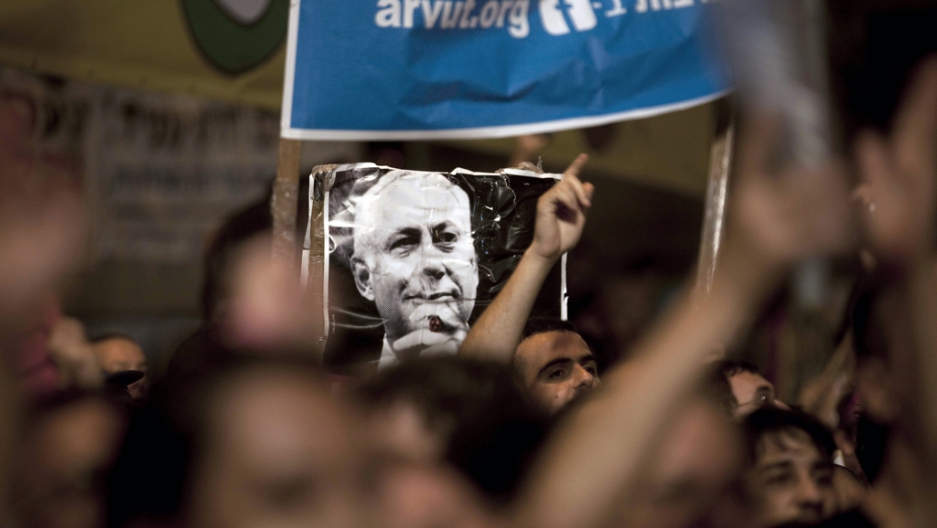 Israeli demonstrators taking part to a protest against rising housing prices and social inequalities in the Jewish state, hold up a wrinkled poster of Prime Minister Benjamin Netanyahu in the centre of the coastal city of Tel Aviv on August 6, 2011.
Credit: Menahem Kahana
Share

JERUSALEM — Jerusalem’s Mahaneh Yehudah market is a commercial, gastronomic and cultural warren of alleys and squares often traversed by journalists trying to divine the national pulse.

Even among hardened and venerable political analysts, it is considered something of an oracular location. Think of it as Israel’s Peoria, Ill., just hotter and spicier.

From the sound of things here these days, Prime Minister Benjamin Netanyahu is in trouble.

No one at this notoriously talkative, bustling souk found it within himself to express a negative or reproaching view of the protests that emerged seemingly out of nowhere five weeks ago and now, despite their ongoing civility, threaten the nation’s stability.

Yossi Mizrahi, 63, born in the old city of Jerusalem, has driven the No. 18 bus line for 41 years. It is a long route, and on an average day he works 10 hours, stopping at the market six times. He greets passengers by name at almost every stop.

He and his wife, who retired from her job as the director of an old age home this year, are the parents of four children, and have six grandchildren. All of their children are married and living on their own, but the Mizrahis are helping pay the rent for two of their daughters, aged 23 and 39, who, even with two incomes, can’t close the month out without sinking into debt.

The Mizrahis have participated in two of the major demonstrations, one in Jerusalem, the other in Tel Aviv.

“My heart is with any movement that exists to improve citizens’ economic status,” Mizrahi said. “Let me tell you why. If you sit down, like my wife and I do at the end of every month, and go over your books, and if you add up the income tax, social security and sales tax, half my salary goes to taxes. Fifty percent!”

“This country has built itself on a specific economic theory,” Mizrahi continued, “which was that large employers would get all the financial breaks, and as a result have money to hire more workers. It’s an okay idea, but reality is that when the uncertainty enters the market, these tycoons take from us, by charging more. So it’s double jeopardy all around: they get all the breaks, and then they break us.”

Three girls dawdle on the street and Mizrahi closes the bus doors. They bang on the glass, and he relents.

“What were you doing there? Chatting about social justice?” he teased them. “Exactly!” they laugh back. “No, really!”

As he drove, Mizrahi left the radio on. No one seemed to listen, but over the airwaves opposition leader Tsippi Livni could be heard, addressing a largely vacant special session of Knesset, the Israeli parliament, saying that this has become “Israel’s summer of hope.”

Apartment prices in Tel Aviv have plummeted by 7 percent in the current quarter, with most economists agreeing the social protests, which are focused on the housing crisis, as the cause.

Mizrahi and his wife own their own apartment in Har Homa, the settlement once again in the news this week, as the Israeli government announced the authorization of 900 new housing units. While both the United States and the European community have loudly denounced these plans, Har Homa exemplifies Netanyahu’s conundrum.

While built on Palestinian land, Har Homa operates, de facto, as a Jerusalem neighborhood. Its residents are not right-wing ideologues but, like the Mizrahis, people looking for affordable housing within reach of work in a saturated, mismanaged market.

The protesters have struck a vein that crosses social and economic strata. Yael Ran, a 40-year-old human resources manager at a major Jerusalem high-tech outfit, enjoying a morning coffee in the heart of the market, said she had not attended any of the rallies, but regretted it.

She and her husband, Itay, who works at Ernst and Young in Tel Aviv, returned to Israel four years ago after seven years living in Boston and New York.

“I regret very much not going to the demonstrations. I guess I’m not a protest type. I’m the kind who hangs out on the couch giving out advice, but I think they are totally right. As part of this country’s middle class I can tell you its very, very hard. Life here is expensive. You have this feeling you can’t get anywhere.”

Both of the Rans work in booming industries. They live in Shoresh, a prosperous bedroom community between Jerusalem and Tel Aviv, drive two cars, and are taking their daughter, Noam, 9, and son, Yonatan, 3, on vacation to Holland at the end of the week.

“Look, we live well,” she said. “We earn decent salaries. We can take our kids abroad. We can send them to great after school activities. And we spend 2,000 shekels ($566) a month on gas and while we rent in a place we love, there is no way we will ever have the million dollars we’d need to buy there.”

Her son came back from nursery school a few weeks ago chanting the rallies’ by now ubiquitous cry “The people demand social justice!” and the entire family is planning on attending the so-called million-man march that is slated for Sept. 3.

The focus of Ran’s anger, like Mizrahi’s, is on industrialists who have benefitted from Israel’s generous stimulus packages.

“You know, I want these people to stop getting prizes and stop being treated like superstars. They receive benefits we would love to receive. I don’t want some tycoon to rebuild a municipal library and get an award for his generosity. I want him to pay taxes like I do and I want the country to fix its own libraries.”

Among her circle of friends, she says, “no one has anything negative to say about these protests.”

“We work very hard. We pay rent. We pay taxes. We do our military service. And we get nothing back from the country. That is why this movement will succeed,” she said.

Where there is criticism, it is mild. Ran’s colleague, Wassim Haddad, 36, director of IT at the same company, who has yet to attend a single march, said, “In general I’m totally in favor, but I’m not in love with the political sterility, because social priorities are definitely a political matter and you can’t detach them from the reality of rule and partisan positioning."

Back at the nerve center of Machaneh Yehudah, Rafael Bitan, 62, a native of Tunisia, sells yarn in the market. He has never in his life participated in a political demonstration.

“You know what?” he says, as Livni’s voice wafts from the radio, “This is the result of tens of years of governments failing. Livni complains about Netanyahu, but what has she actually done? It’s just talk. Things are going to begin to get better now thanks to these young protesters on the streets, not her or him!”

“Of course I’m completely with them.”