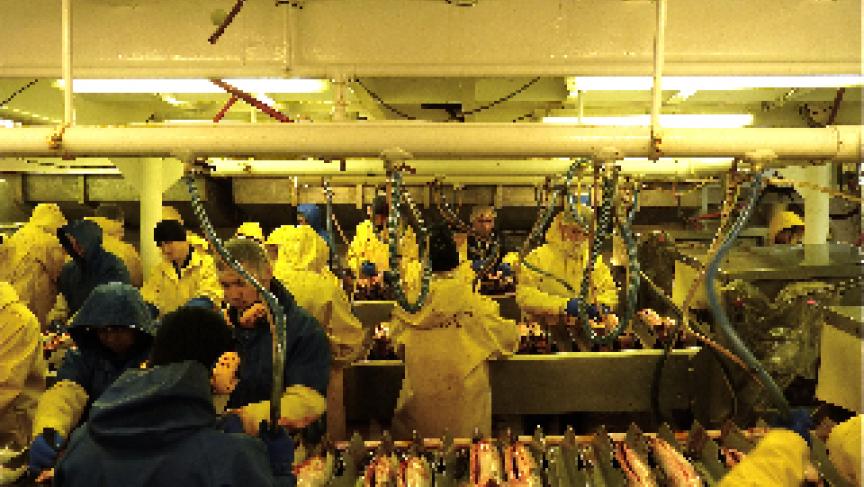 At the dock at the Sno-Pac fish processing plant in Dillingham, Alaska, boats deliver thousands of salmon per day. American college students used to stand along these assembly lines. But now, you’re more likely to hear people speaking Russian, Spanish or Chinese.

Here in Bristol Bay, globalization has transformed fish processing plants over the last couple of decades. Most of the workers now are foreign students, on J-1student visas, designed for cultural exchange and training.

Many people probably wouldn't put fish gutting into those categories, but the workers are allowed in under the work-travel option of the visa.

Mache Kazubovsky, a student at the University of Warsaw in Poland, said he paid around $3,000 to a recruiting agent to set him up with the job at Sno-pac. When the salmon are running, Kazubovsky works 16-hours a day with time-and-a-half for overtime. He earned minimum wage, but his room and board are covered. Kazubovsky hopes to double his initial investment, and then take a cross-country trip.

Another worker here is Hoy-Juhw, from Mainland China. She is studying applied linguistics back home and plans to be a teacher. Like Kazubovsky, she's here to travel.

"I want to see New York and Washington, DC -- the most famous cities, everyone has to see," Hoy-Juhw said. "Most of all I want to experience what is real American life. I mean, not the one in a factory in Alaska, but the real American life on the mainland, in the big cities."