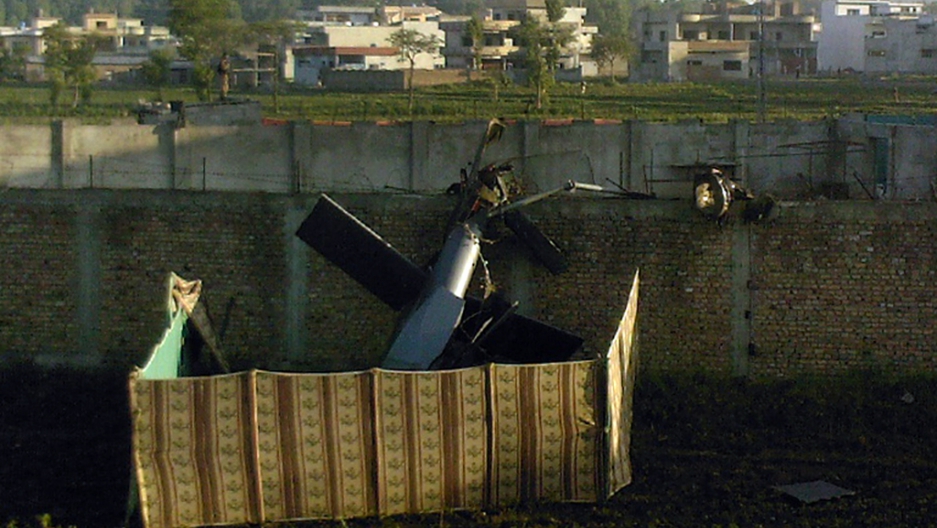 A crashed military helicopter is seen near the hideout of Al-Qaeda leader Osama bin Laden after a ground operation by US Special Forces in Abbottabad on May 2, 2011.
Credit:
Share

BEIJING, China — Rumors that China got a sneak-peek at the remains of an American helicopter downed in Pakistan during the raid that killed Osama bin Laden have made headlines this week.

But the truth is that they are nothing new.

The theory has been circulating since just days after the copter crashed in May.

It’s only now that the news has gotten traction, with first the Financial Times, then media around the world (including GlobalPost) reporting that U.S. military sources believe that Pakistan gave China special access to inspect and photograph what remained of the stealth craft.

Some say it's the result of a U.S. snub to Pakistan.

Adm. Mike Mullen, departing chairman of the U.S. joint chiefs of staff, skipped Pakistan on his recent farewell tour. Pakistan, reportedly, would not give Mullen a clear answer about whether it gave China access to the helicopter’s remains.

More from GlobalPost: Will the US lose Pakistan to China?

Some sources say if that’s true, Pakistan stabbed the United States in the back again.

But even if Pakistan did give China a peek at the downed chopper and its special technical elements, it should come as no surprise.

Pakistan maintains a close, possibly less fractious, relationship with China than it does with the United States, and China is not afraid to call in favors when it feels it’s owed.

Just this month, Pakistan deported five ethnic Uighurs back to China, which had accused members of that ethnic group of conducting terror attacks in Xinjiang. After a series of deadly stabbings in bomb blasts in Kashgar, in far west China, Beijing faulted Uighurs who had trained in terror camps in Pakistan.

Among the deportees, one report said, two of the five sent back to China for potential punishment were children.

Given their deep bond, it seems like common sense that Pakistan would play China against the United States given the opportunity.

In Beijing, China-Pakistan experts say they doubt the veracity of the helicopter story, but that the world should understand China and Pakistan have deep ties.

Du Youkang at the Pakistan Research Center of Fudan University in Shanghai said he thinks the hubbub will blow over.

“There's no confirmation by officials at all,” said Du. “The information online comes from unreliable sources.”

“The relationship between China and Pakistan has always been friendly, with the 60th anniversary of the establishment of diplomatic relations [this year],” he said.

“And the photo incident is too minor a factor to affect relationships between large nations,” Du added. “Common benefits bond them.”

There’s been no comment from the Chinese government and no discussion of the matter in official Chinese media.

Online, the topic has drawn a few conversations, mostly dismissive of ulterior motives.

"Is there anything to affect in the U.S.-Pakistan relationship?” wrote one poster on Sina Weibo. “They're just doing business. But Pakistan's relationship is different with China.”

More from GlobalPost: Pakistan's mangoes sweeten relations with US