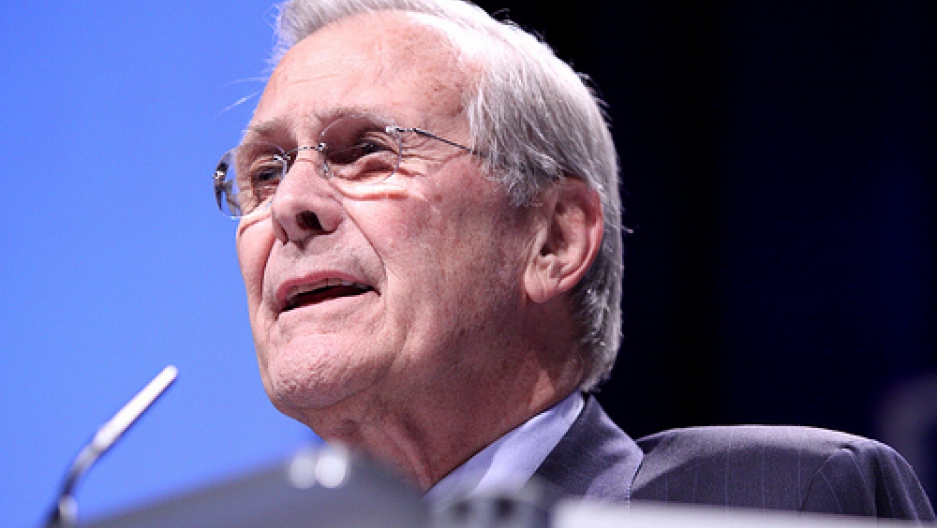 Former Defense Secretary Donald Rumsfeld is being sued over the alleged torture of three U.S. citizens who were working as contractors in Iraq. Federal judges have allowed prosecutors in the two separate cases against Rumsfeld to go to trial.

Of the three citizens filing the charges, one was a military translator. The others were security contractors who blew the whistle on possible illegal activity, only to be labeled "enemy combatants."

Rumsfeld claims immunity, and the Obama administration is backing him up.

Dahlia Lithwik, senior editor at Slate.com, wrote about the lawsuit. She says the case of the contractors "reads like 'Catch-22'."

The two security contractors worked for an Iraqi company called Shield Group Security, where they saw suspicious activity. After reporting the activity to the FBI, the contractors, who were seeking protection, were instead picked up by military personnel and detained at Camp Cropper -- the same prison that once held Saddam Hussein. There, the men claim, they went through interrogation and torture. They were never charged with any crime.

Lithwik explained on Here and Now that historically, the judicial system stays out of military affairs. However, the courts now have allowed these cases to go to litigation to determine if claimants' constitutional rights were violated by the government.

"The drama here is that courts are finally saying 'let's let this go to trial and see what happens here'," said Lithwik.

Prosecutors will have a difficult time proving Rumsfeld directly authorized the interrogations, and knowingly violated constitutional rights by doing so.