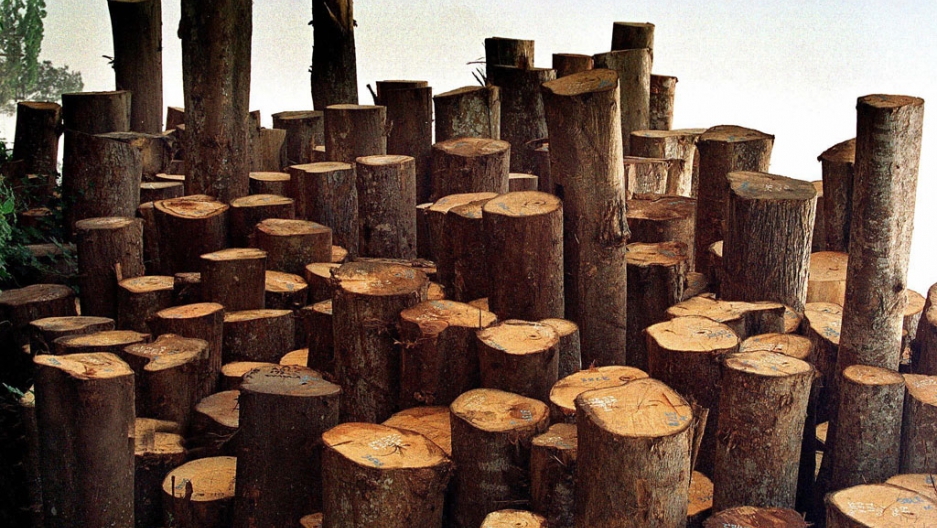 BANGKOK, Thailand — Is your coffee table stamped “Made in Vietnam”?

If so, there’s a decent chance it was once a tree in the dwindling jungles of Laos, sawn down illegally by a timber syndicate and smuggled into Vietnam for processing.

Those are the findings of the London-based Environmental Investigation Agency or EIA, whose eco-sleuths traveled to Southeast Asia and posed as timber merchants to uncover corruption.

The nonprofit claims Vietnam’s booming furniture trade feeds off precious Lao jungles where logging is legally forbidden. The majority of this trade’s customers are in America, which has imported an estimated $2 billion in Vietnamese furniture so far this year.

Worse yet, according to the EIA, is evidence that one of the chief logging firms is run by Vietnam’s military, a claim the government rejects outright. “There is no smuggling of timber from Laos by the Vietnamese military,” Vietnam’s foreign ministry spokeswoman, Nguyen Phuong Nga, told GlobalPost.

As diplomats brace for more U.N. climate change negotiations in South Africa at the year’s end, these new findings force an uncomfortable question: What good are tough environmental promises if they’re eroded by bribery, smuggling and corruption?

What's so bad about logging in Laos?

Nothing, so long as it’s not reckless and impoverished citizens receive some benefit. That’s seldom the case.

Laos is poor and landlocked but blessed with rolling, jade-green landscapes. Logging, however, is rapidly stripping away its jungles. At the current rate, the country will be left with only 30 percent forest cover by 2020, according to United Nations estimates.

In response, the Lao government decreed four years ago that no raw logs can be exported from the country. For the most part, wood can only be legally exported as factory-finished furniture, which generates desperately needed local jobs.

But Lao furniture factories can’t keep logs in stock, says the EIA. Too many jungles are controlled by Vietnamese syndicates that pay off officials to let them bring in foreign crews to smuggle out Lao timber.

The loggers’ territory in Laos is “basically a mini-Vietnam,” said Julian Newman, an EIA campaign director. “All the shops’ signs are in Vietnamese. All the workers are Vietnamese. They even have their own karaoke bars down there.”

These operations amount to a lose-lose proposition for Lao people. The poor rely heavily on jungles to fill their bellies, either through hunting or scavenging sellable forest fauna. When foreign loggers show up, locals lose both the jungles they depend on and the opportunity to at least earn some cash by cutting them down.

But because of Laos’ authoritarian Marxist-Leninist government — portraits of the communist revolutionaries still hang in bureaucrats’ offices — Lao citizens have little power to protest and demand better enforcement.

“If the Lao government considers it legal, there’s not much the rest of the world can do,” said James Bampton, a Thailand-based coordinator with international conservation group The Center for People and Forests. “We can just try to emphasize why we think they should change the way they do business.”

Why do Vietnamese loggers lean on Laos?

The nation is comparably weak and right next door. Most of the region’s more developed countries — such as Thailand, China and Vietnam itself — have already restricted heedless logging in their own jungles.

Instead, Vietnam has turned to Laos, which contains some of the “last intact tropical forests” in mainland Southeast Asia, according to the EIA. Neighboring Cambodia is also logging its remaining jungles. So is Burma, an even more repressive nation where rampant logging funds the country’s military junta.

Vietnam must supply an increasing number of logs to its explosive furniture trade, which is now the world’s sixth largest. The industry employs a quarter of a million people and is estimated this year to rake in $4 billion. The Vietnamese government says it wants to nearly double those earnings by 2020, according to the U.N.

Among the more aggressive loggers, according to EIA investigators, is a military-run outfit known as the “Company of Economic Cooperation - Ministry of Defense.” The watchdogs claims to have confirmed the company’s smuggling operations while acting as international timber buyers.

“They basically said, ‘We choose the trees we like ... bring our loggers and transport it back across the border,” Newman said.

The EIA, however, is careful to point out that most Vietnamese exports are legit. “To be fair, our rough calculations show that somewhere around 15 to 20 percent of timber inflows to Vietnam involve illegality,” Newman said. “It’s not the majority.” Yet another environmental watchdog group, Forest Trends, agrees with these estimates.

Who's buying all this furniture?

Mostly Americans, who buy more and more each year.

In the first six months of 2011 alone, Vietnam exported $1.7 billion in furniture products to the U.S. That’s nearly double the roughly $1 billion amount exported throughout the entirety of 2008. Such demand has driven an “alarmingly high” level of deforestation in Laos, the EIA says.

The second-largest importer of Vietnamese furniture is the European Union, though sales to China are surging.

While most furniture labelled “Made in Vietnam” is lawful, brands that use “keruing” or “yellow balau” wood are more likely to be made from illegally felled Lao trees, according to the EIA. (The latter is sometimes marketed in the U.S. as “shorea” wood.)

Under a recently strengthened U.S. law called the “Lacey Act,” even American importers can catch $500,000 fines or prison terms for bringing in illegally sourced wood. So far, however, the law appears loosely enforced.

Why should Americans care?

At this rate, the destruction of Laos’ jungles will drive dozens of wildlife species into extinction, including endangered tigers and elephants. The logging also robs desperately poor people of a food source and the opportunity to make a living from their country’s own natural resources.

Deforestation is believed to cause roughly 20 percent of the carbon emissions that stoke global warming. In December, the U.N. will gather roughly 200 governments to, once again, try to devise a strategy to avert catastrophic climate change.

Experts, however, say Laos can profit from its forests without inviting foreigners in to recklessly destroy them.

“The Asia-Pacific region can benefit enormously from the example of other countries where logging is widespread,” said Rajendra Pachauri, an Indian researcher who shared the 2007 Nobel Peace Prize with Al Gore. “In the Scandinavian region, for instance, there’s vast forest cover that is exploited on a sustainable basis.”