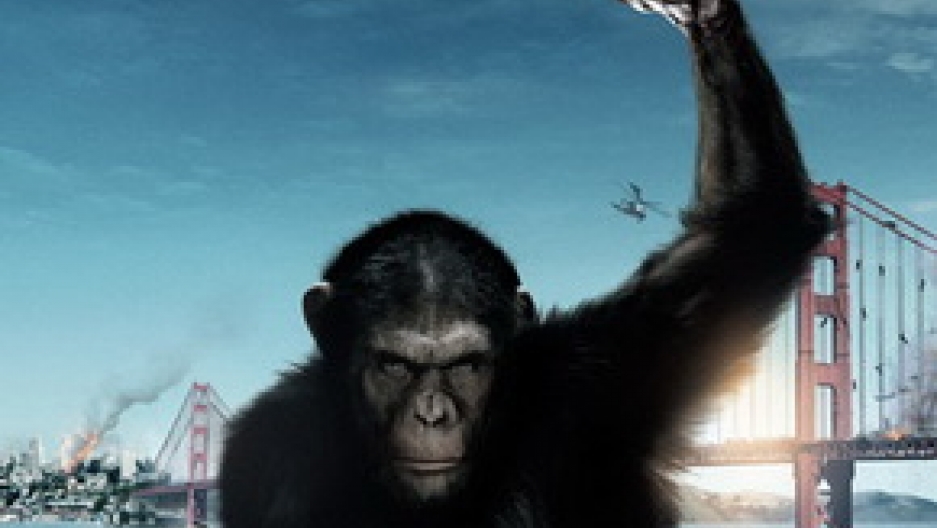 "Rise of the Planet of the Apes" -- the prequel to "Planet of the Apes" -- explains how apes evolved into the intelligent beings portrayed in the original story. A scientist, played by James Franco, develops what he hopes is a cure for Alzheimer's disease. When the medication is tested on chimps, it has the unexpected effect of boosting their intelligence.

One of the first chimps to benefit from the drug is Caesar, played by British actor Andy Serkis. Caesar leads the ape revolt after recruiting a gorilla, and eventually, multiple zoos' worth of apes.

Serkis is able to play the part of a chimp with the help of motion capture technology -- a familiar tool for him, since he used it to play Gollum in the Lord of the Rings trilogy, and King Kong in the 2005 remake.

Serkis explains that for the technology to work, he is required to wear a suit covered with dots. A series of cameras around the actor pick up every move from multiple angles. In real time, computers are able to translate each movement into the body of the computer-generated character. He wears 132 markers on his face, including on his eyelids, to pick up where he is looking. He equates this process to wearing a "digital mask."

Serkis says acting in motion capture is no different than other kinds of film acting, with one exception: for traditional films, make-up and costumes are applied before he starts acting; for motion capture, "the look of the character is applied afterwards."

"I never think of performance capture as any different to shooting a performance with a 35 millimeter camera. It's about getting inside the soul," says Serkis. "It's about believing that you are that thing, or that person, or that animal, and totally inhabiting it -- in the same way that you would any screen character that you play."

To inhabit the character of Caesar, the actor studied the documentary of a chimp named Oliver who walked upright, was described as having a "humanlike face," and was even called a "humanzee."

Serkis' work on King Kong involved extensive research on apes as well. He studied four gorillas at the London Zoo, and 23 wild gorillas in the Virunga Mountains in Rwanda. He says his research taught him about generic gorilla traits -- like how they eat, sleep and nest. Even more importantly, he realized: "saying, 'I'm going to study gorillas' is like saying 'I'm going to study human beings.' […] They're all absolutely different from one another -- have their own personalities, have their own characters."

Although the actor enjoys the anonymity that comes from playing parts under computer-generated masks, he does hope that the general public will become more educated about motion capture acting. Says Serkis, "The only thing that I'd like to happen, I suppose, is people to have a really thorough understanding of this kind of acting, because it's not going to go away."

Watch Serkis in action in this trailer of "Rise of the Planet of the Apes":