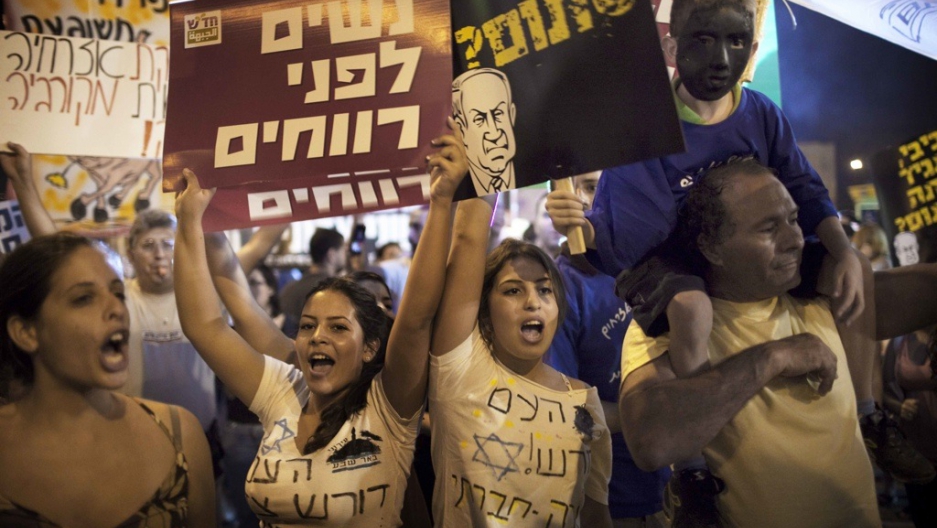 Thousands of Israelis demonstrate in the center of the southern Israeli city of Beersheva on Aug. 13, 2011.
Credit: Menaham Kahana
Share

In Israel, anything that isn’t Tel Aviv or Jerusalem falls under the umbrella term “periphery.”

Sometimes the periphery is distant, in Israel’s miniature terms, such as the southernmost city of Eilat, on the Red Sea, a four hour drive from Tel Aviv. Other times, it can be next door. For organizers of Saturday’s protests in Israel “next door” in this case was literally next door: the Tel Aviv neighborhood of Jaffa, with its mixed Arab-Jewish population and the stunning 3,000-year-old port that Napoleon Bonaparte once ravaged.

“We’re the periphery of Tel Aviv,” said a few semi-embarrassed protesters on this night, the night Israel’s social protesters took over the nation’s streets, and pointedly not those of Tel Aviv and Jerusalem.

Eighteen cities saw their downtown areas cordoned off and police deployed as 100,000 people took to the streets in the style that has become typical of these events: families, young people, pensioners peaceably but implacably gathering in central squares, blocking off main roads and shouting for “social justice.”

In the northern city of Haifa more than 30, 000 people marched and gathered to hear the 85-year-old writer Sami Michael, an Iraqi-born onetime communist who taught himself Hebrew at the age of 45, laud the protesters for “coming together, Jew and Arab, poor and middle-class.”

In Be’er Sheba, the capital of the Negev, in southern Israel, legendary crooner Margalit Tzan’ani, (think of a Yemenite Dolly Parton with a little bit of Tine Turner thrown in) came to make amends after having insulted the Tel Aviv protesters in an unfortunate radio interview last week in which she referred to the young movement leaders as spoiled and gutless.

Meanwhile, as government spokesmen finally organized, after a month of demonstrations, to provide pro-Netanyahu spin in real time, the ones most at a loss this week seemed to be Israel’s political analysts, who display disbelief that the protests have yet to fizzle out.

An Israel Radio interviewer caught up with movement leader Daphne Leef, who chose to spend this Saturday night in the Afula march, to ask if the protest leadership hadn’t become ‘too dispersed.”

“Aren’t you asking for too many things? Don’t you think you need focus? What can you achieve like this?” he queried.

Leef, who is 25 years old, started the current civil strife in mid-July when she pitched a tent in the manicured center of Tel Aviv’s Rothschild Boulevard after being kicked out of her apartment, which was undergoing renovations.