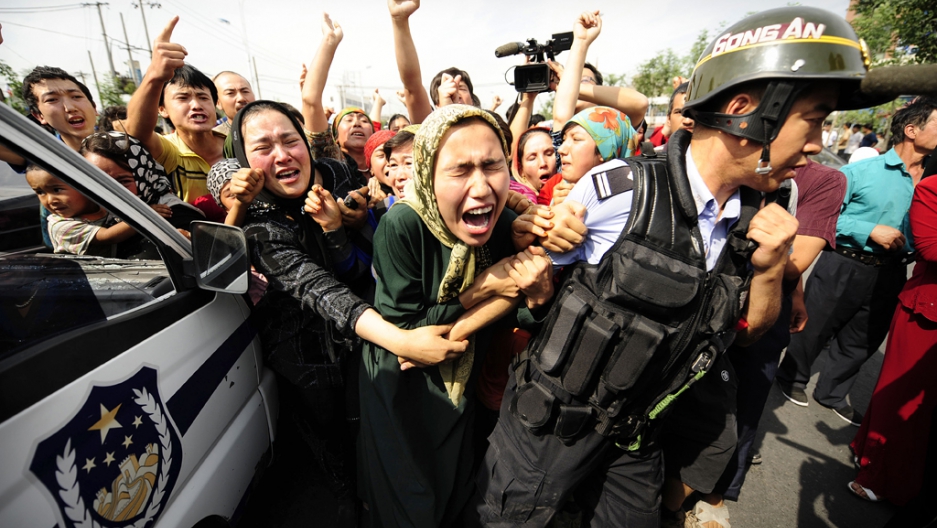 Ethnic Uygur women grab a riot policemen as they protest. Protests by ethnic Uygurs in the summer of 2009 lead to the deployment of thousands of heavily armed police in China's far west Xinjiang
Credit: Peter Parks
Share

The streets of Guizhou in southwestern China took a lesson from London on Thursday evening, erupting into riots with the smashing and burning of vehicles.

Xinhua reported that the riots, which quickly attracted thousands, were set off when officials injured a female cyclist while trying to confiscate her bicycle for illegal parking.

The riots carried on through the night Thrusday, with 10 police officers wounded.

It is the latest instance of percolating discontent in China bubbling over.

In recent months, groups of migrant workers, parents and townspeople have demonstrated over everything from discrimination and a growing wealth gap to government corruption and lead poisoning among children.

Last month, hundreds of people in another southern Chinese city rioted after authorities beat up a one-legged fruit seller, who later died of his injuries.

In the city of Chaozhou, also in south China, 200 migrant workers demanding their wages at a ceramics factory recently attacked government buildings and set vehicles on fire.

But are these incidents becoming more frequent, or is it that they are getting more media attention?

According to reporting by GlobalPost's Beijing correspondent, Kathleen McLaughlin, it's almost impossible to tell.

Experts say the number of protests has likely grown to around 100,000 such incidents every year.

“For me, I think the question is not why are so many people protesting, but why are not more people protesting given the day-to-day social injustice that ordinary people have to endure?” Geoffrey Crothall, communications director for the Hong Kong-based China Labour Bulletin, told McLaughlin.

“We shouldn’t be at all surprised that people are taking to the streets, because the vast majority of them have no other alternative.”