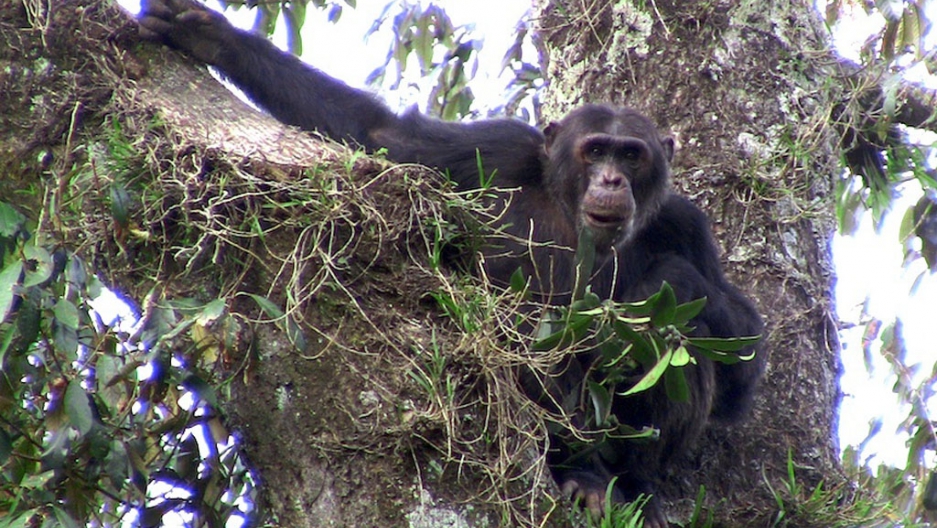 A new project proposes relocating human families so a group of chimpanzees will have a forest path to connect them to other primates.

Environmentalists say the chimps are doomed without the new corridor. But not everyone agrees that saving 20 primates is worth uprooting human lives.

Once widely covered by tropical forest, Rwanda's fertile peaks and valleys have gradually been taken over by farmland. With more than 10 million inhabitants in an area the size of Massachusetts, Rwanda is the most densely populated country in continental Africa and its land is growing ever scarce.

The country’s remaining forests are endangered as the consequences of past deforestation have mounted. As a result of reduced tree cover, Rwanda’s soil fertility has diminished, its rivers have silted, its hills have become prone to landslides and its biodiversity threatened.

Determined to reverse this tide, Rwanda is fighting back. This February, in what environmental groups have called a developing country “first,” Rwanda vowed to achieve country-wide restoration of its soil, water, land and forest resources over the next 25 years. To accomplish this, it’s working with communities to change attitudes about sustainable development.

Nowhere are Rwanda’s re-forestation efforts displayed better than in Kinihira, a sleepy village that hovers above the puzzle-piece-like inlets of Lake Kivu.

A century ago, this area was home to the 100-plus square mile Gishwati forest, where Batwa pygmy hunter-gatherers, Rwanda’s original human inhabitants, coexisted with chimpanzees and other primates.

Since then, Gishwati Forest has been gradually decimated, encroached upon by tea plantations, cattle ranching schemes, resettled refugees, and subsistence farmers with nowhere else to turn for land.

By 2007, Gishwati had shrunk to a trace of its former self, standing at a mere 3.4 square miles and rapidly disappearing. That’s when Rwandan President Paul Kagame and American conservationist Ted Townsend, founder of the Iowa-based primate research facility Great Ape Trust, signed an agreement to create a national conservation park designed to improve local livelihoods while at the same time enhancing biodiversity.

Home to endangered primates and surrounded by vulnerable human populations, Gishwati was a natural choice for the project. In the previous year dozens of locals had been killed by floods and landslides — direct results of deforestation. With land scarce, residents continued to infringe upon the forest.

“When we started working here, there were trails of cows inside the forest, people growing cabbages and cutting down trees for charcoal,” said Madeleine Nyiratuza, coordinator of the project, known as the Gishwati Area Conservation Program (GACP). “It was crazy.”

As a first step, GACP set out to reduce Gishwati Forest’s “hemorrhage,” according to Benjamin Beck, director of conservation at Great Ape Trust, which manages the project. It established a research presence in the forest, led by American primatologist Rebecca Chancellor, and hired a force of "eco-guards": unarmed, uniformed officials tasked with identifying illegal or unsustainable forest activities and working with locals to identify alternative means of livelihood. By employing local staff, working with schools, and supporting local artisanal cooperatives, the project began to inject financial benefits into communities while promoting more sustainable attitudes toward the forest.

More from GlobalPost: Population of rare gibbons found in Vietnam

Three years later, the project has not only put an end to the hemorrhage: through the demarcation of legal boundaries and the annexation of illegally occupied land, Gishwati’s protected area has actually increased by 67 percent.

Now, the project is seeking to go further. Gishwati’s 20 chimpanzees, which experts believe form the most densely populated chimp community in the world, will eventually be doomed unless they gain access to a larger gene pool. To facilitate this, GACP has proposed the planting of a forest corridor, averaging a width of a quarter mile, which will stretch at least 40 miles to Nyungwe National Park, a forest home to 400 other chimps, which was once connected to Gishwati. Rwanda’s government has included the scheme as part of Rwanda’s land use master plan that is currently under review by Parliament.

The endeavor is has drawn criticism because it will require the relocation of an unspecified number of human families to government-provided housing. Some charge that uprooting of human lives is a heavy price for saving 20 primates.

To Beck, this reasoning misses the point. By the government’s own admission, he says, the subsistence farming practiced in affected areas is unsustainable, as population grows and land is divided among more and more people. As a destination for eco-tourism, the Gishwati conservation center will create jobs to help local youths transition from idleness or unproductive farmwork to the country’s nascent services economy.

While most agree this shift toward sustainable livelihoods is necessary, the transition will not come easily. It’s a reality on display in Nyarusuku, a hardscrabble settlement a few miles down the dirt road from Kinihira.

Here, in this government-built community, a small group of Batwa pygmies ekes out a meager living performing ritual songs and dances for visitors. Though resettled from Gishwati in the 1970s, these one-time hunter-gatherers remain largely cut off from modern Rwandan society: unkempt, unable to hold formal jobs, and, as their performances glorifying forest life suggest, longing for better days past.

Though just a small percentage of those living near Gishwati, the Batwa’s struggles are symbolic of those faced by rural dwellers across much of Africa; confronted with environmental change and forced to embrace the modern world before they’re ready.

While it may seem appropriate, in this context, to view man and nature in a constant state of conflict, Benjamin Beck of the Great Ape Trust is quick to emphasize that sacrifices made for nature today are in the interest of man’s well being tomorrow. Gishwati Forest’s residents, he says, have come to understand this.

“There’s this idea that there is an inherent competition between conservation and population. I think we focus too much on the either or. We need to search for novel solutions that provide co-existence.”

More from GlobalPost in Rwanada: Rwanda marches to the beat of an old drum