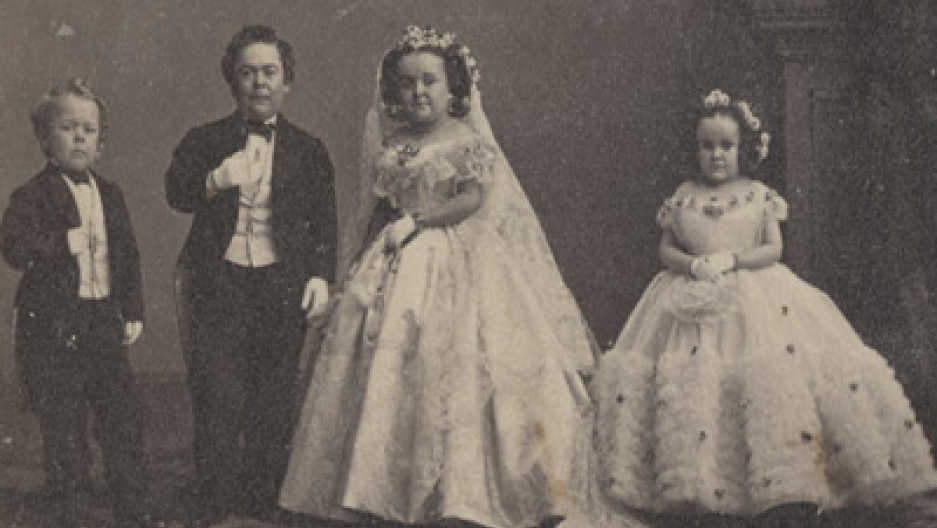 Lavinia Warren (bride in center) was only 32 inches tall.

Before Brangelina or Bennifer, before Lucy and Desi and even before Bogey and Bacall there was General and Mrs. Tom Thumb.

In her new novel Melanie Benjamin focuses on Mrs. Thumb née Lavinia Warren, who, unlike her husband has nearly been lost to history. Benjamin postures that "because she was a woman, because it was always Gen. Tom Thumb" Warren has been forgotten.

Benjamin conducted thorough research into Warren's life before writing the book and found that when she was alive Warren was a true "spitfire" who wrote many essays and had feminist leanings. During the Victorian era, there were few paths for a women to take in her adult life (and even less for a woman only 32 in. tall). Benjmin determined that Warren's choice to become a performer afforded her more opportunities than most women.

"I think she was very smart to realize that her size gave her an entry into a world she would not be able to see otherwise," Benjamin said. "She was so focused on getting out in the public and leading this larger life."

Although Warren and her husband were undoubtably famous, Benjamin says the couple, and especially Warren, are less recognizeable today because of the reason why they were famous. Most politically correct Americans do not want to remember a time when freak shows were popular.

"We don't want to think of those years where she was a curiosity," Benjamin said. "Today we don't like to remember that part of our history and we have different words for it. There's an uncomfortable factor to it."

Warren and her husband were part of P.T. Barnum's traveling circus. Their physical oddity gave them their fame, making them possibly the most photographed couple of their day. When the two were wed during the turmoil of the Civil War in 1863, the event caused a national sensation--President Abraham Lincoln hosted their reception at the White House. Benjamin says the Thumbs exhibitionist career reminds her of the reality TV stars of the present day.

"She deceived herself into thinking that people were interested in her for talents that she truly didn't have. She maybe wanted to hide herself from the fact that people were really only interested in her size," Benjamin said. "And I do see parallels with certain types of fame today where people forget why they were famous in the first place and believing they have talents they might not truly posess."

Benjamin's book is titled "The Autobiography of Mrs. Tom Thumb: A Novel."