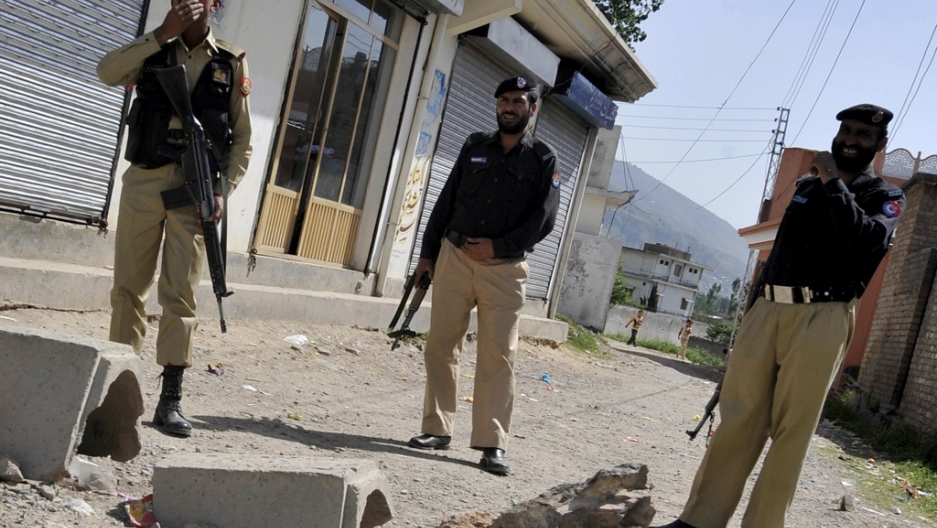 Pakistani military and police officials cordon off a street leading to the final hideout of Osama Bin Laden in Abboattabad on May 9, 2011. Pakistan announced an official probe into the question of how bin Laden could live in a garrison city.
Credit: Aamir Qureshi
Share

The whole story of how Osama bin Laden was found to be hiding out in Abottabad, Pakistan — recreated in incredible detail in The New Yorker — was made up, according to R.J. Hillhouse, a prominent security analyst and author.

According to Hillhouse, who attributes the news to her sources inside the intelligence comunity, a Pakistan intelligence officer came forward with the information of bin Laden's whereabouts in exchange for the $25 million reward and U.S. citizenship for his family. The informant, Hillhouse says, claimed that the Saudis had been paying the Pakistani military and intelligence agency, ISI, to shelter bin Laden under house arrest.

"The C.I.A. and friends then set about proving that OBL was indeed there," Hillhouse writes. "And they did."

Hillhouse says that the United States then approached Pakistan, which agreed to cooperate on the raid. A cover story that bin Laden was killed in a drone attack was designed but had to be scrapped at the last minute when that lone Black Hawk spun to the ground. A new story, of a courier, was used in its place.

"The cooperation was why there were no troops in Abottabad," she writes. "It had always seemed very far-fetched to me that a helicopter could crash and later destroyed in an area with such high military concentration without the Pakistanis noticing."

GlobalPost in Abottabad: Bin Laden lives near forces with US ties

Of course, the idea that the story might be a cover is not new. As GlobalPost has pointed out before, all the news about bin Laden, the raid and the aftermath — which has been decidedly favorable to the United States — has come from anonymous U.S. officials. And all the news has actually played well for Pakistan as well. Pakistan, whose populace is largely anti-American, has an interest in absolving itself from any C.I.A. activities conducted inside the country.

More from GlobalPost: Are US-Pakistan relations actually at an all-time high?

Hillhouse's account begs several questions. One, what interest would Saudi Arabia have in sheltering bin Laden? Saudi Arabia has gone through great pains to improve its image internationally in the aftermath of Sept. 11 and to stamp out radicalism in the country. Second, the sources are still anonymous. There remains no concrete evidence one way or the other.

The only independent evidence we do have is from the reporting that that came from the ground in Abottabad after the raid. Interviews done with local security officials and residents indicated that the Pakistani military did know about the raid beforehand. But that line was buried by the line coming from Washington. And, of course, a villager in Pakistan — unfortunately — always loses when contradicted by a U.S. official.

Hillhouse is a former smuggler turned author who publishes the national security blog, The Spy who Billed Me. She has credibility enough that she has been featured in the New York Times (if that's what gives one credibility), was granted an exclusive interview by the head of Blackwater, and in 2007 discovered the budget of the U.S. national intelligence community in metadata she found inside a declassified PowerPoint presentation, which caused quite a stir.