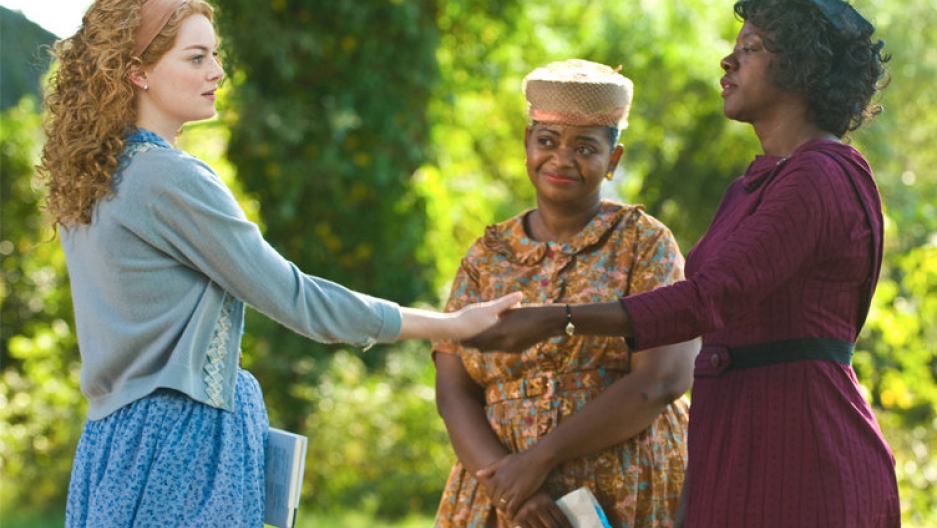 Emma Stone, Viola Davis and Octavia Spencer and in a scene from 'The Help'. (Photo: thehelpmovie.com)

Story from Here and How. Listen to audio above for full report.

When Kathryn Stockett published "The Help" in 2009, the novel's premise caused some reviewers to pause: the novel's heroine, Skeeter, is a young white woman in 1960s Mississippi who wants to write a book of the stories of the African-American maids working in her friends' homes.

But "The Help" became a publishing sensation, and still remains on the New York Times best seller lists today.

This weekend, the film adaptation of "The Help" opens in theaters. Tate Taylor, a childhood friend of author Kathryn Stockett, adapted the novel and directs the new film. For him, like for Kathryn Stockett, the project allowed him to explore his memories of growing up in the segregated  in Jackson Mississippi in the 1970s with a African-American maid.

Emma Stone stars as the aspiring writer Skeeter, and Octavia Spencer plays Minnie, one of the maids who works with Skeeter on her book. Spencer admits being taken aback when she read the first lines in the book and saw that there was a "dialect."

"But as I continued to read, I realized she wasn't making a statement about race as most books of that era usually do with women and men of color," Spencer added. "I felt as if both the black women and the young white girl had a stake in what they were doing."

View trailer for "The Help":