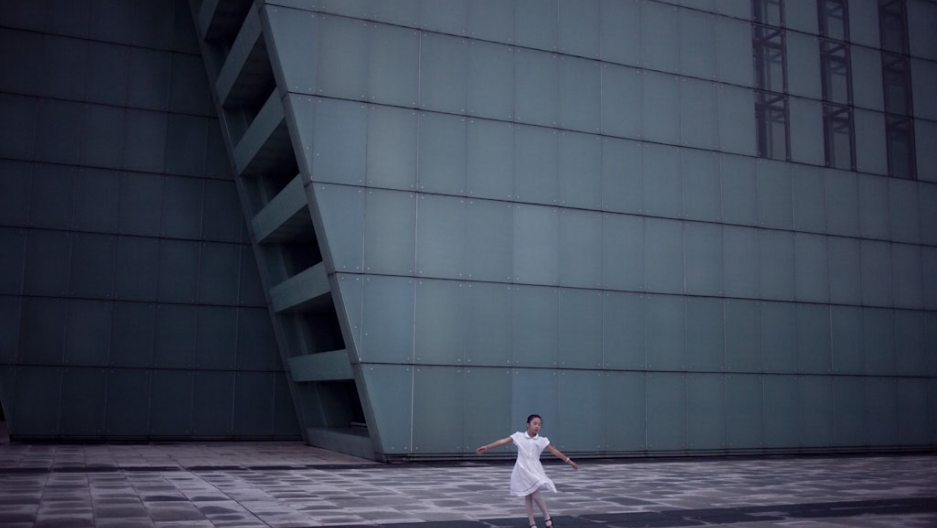 SHANGHAI, China — In April 2010, the night the Obama Club opened here, TV crews jostled with one another to film the young, well-dressed professionals sipping champagne.

The club spared no detail in its quest to deliver an upscale, "presidential" experience. Black and gold dragons were sculpted into the walls, greeting revelers in the lobby. Behind a black velvet curtain, a spacious circular room bustled with dancers on a catwalk. The crowd was wowed.

But on a recent Saturday night, the club was empty but for 10 guests, huddled around a single table.

Like similar establishments in Shanghai — and those in other up-and-coming Chinese cities such as Chongqing — the Obama Club was built to meet a projected rise in demand that apparently hasn't emerged.

(GlobalPost in Chongqing: Photos of a second-tier starlet)

China's successful citizens still like to celebrate. Many bars and restaurants in Shanghai remain packed at night, and China’s high-octane economic growth held steady at an annual rate of 9.7 percent this first quarter — compared to 1.9 percent in the United States.

But a visit to desolate bars and a stroll through empty entertainment districts across the nation suggest that investors are building far too many swank, new establishments, with too few customers to keep them in business. China’s growth has become dependent on a build it-they-will-come attitude that hasn't materialized.

It's a bit ironic, given China's admonishing remarks for the United States over the weekend. After Standard & Poor's downgraded the U.S., China wasted no time in reprimanding the U.S. for its "debt addiction."

If empty bars are an indicator, many businesses in China may not be able to repay their loans. Given the trillions of dollars outstanding, China too may eventually appear to be addicted to debt.

Analysts blame excessive real estate development on economic policies that restrict what China’s wealthy people and companies can do with their money. Far fewer investment options exist in China than in the West, and while those with savings in emerging countries tend to play global markets, Chinese are prevented from doing so by bureaucracy and foreign exchange restrictions. For example, individuals can move only $50,000 abroad per year, according to the Bank of China.

And so China is channeling more and more of its wealth into real estate development, and the entertainment sector is particularly popular. Demand, however, has not kept up with supply.

This reality is perhaps clearest among establishments that cater to the elite. From high-rise condominiums to entire cities, behind some of China's fanciest façades things remain eerily hollow.

Ritzy amenities in Chinese urban centers are as accessible as those found in developed nations; and they demand sky-high premiums. To gain access to the themed party rooms at the Obama Club, for instance, patrons must pay $9,280 a year for a VIP membership, according to the assistant general manager, Johnny Wong from Hong Kong.

“Try to pick up this table,” Wong said, standing in one of the Obama Club's themed rooms. “It’s made of real crystal; so are all the dinning sets.” The table wouldn’t budge.

(GlobalPost in Shanghai: Is China's real estate bubble about to pop?)

In Chongqing, a hilly city quite literally on the rise, the development firm Shui On Group built Tiandi, a village-like entertainment district that stretches more than three city blocks. Restaurants serve haute cuisine and bars boast drink specials far more costly than the average hourly wage of $2.50. Next to the entertainment district, a forest of condominiums climbs toward the sky.

It opened to the public just over a year ago. Yet, look above the first floor today, and you’d be surprised to hear that it had opened at all.

Most of the five-story main building remains vacant. On the fourth and fifth floors, layers of dust and soot cover the empty rooms; the elevator button to the third floor appears to be inactive.

Property speculation is commonplace in Chongqing, according to Li Shengyu, a nine-year observer of the Chongqing market and chief inspector of operations of Maigaiti Elegant Living Real Estate Development Co. Ltd.

Speculators use their guanxi, or business relationships, to secure property through developers without signing a contract, Li said. After the price goes up, they sell the property, place the new buyer’s name on the contract, and profit from the difference, he explained.

At Tiandi, for instance, all is not sluggish for the privileged few with cash to spend.

On the ground floor, two dozen yuppies dressed in neatly tailored clothes sit at a bar accented with aquamarine lights. Inside, a huge shark tank next to the door divides the bar from a swimming pool reserved for VIPs.

(GlobalPost in Tangxia: Rich-poor gap widens in the the heart of China)

“We have three sharks from South Africa,” Cecilia Jiang, the night manager said in squeaky-clean English. “And only VIPs will be invited to the ‘posh party.’”

VIP membership at Dancing with the Sharks starts at $773 a month, an astronomic price relative to local salaries, yet it is early on a Wednesday night and the place is already filling up.

For certain, a nascent market forming in China’s second tier cities could profit from catering to the newly well-to-do. But excessive private and government development will continue to saturate a market that is already over capacity.

That, according to some reports may fuel a bad debt problem in China, where local governments have trillions of dollars worth of debt outstanding. But developers like Li Shengyu are not concerned.

Li says local governments can seize land or place previously government owned plots on a public market, and sell them off to replenish provincial coffers and clear loans from the central bank.

But with pervasive speculation and government acquisition of property, Li says, "most real estate will be bought out, and some monopolized, which in turn will drive prices up and make it harder for people to buy property."

In his view, the real victims of the excessive building boom may end up being the prospective home owners themselves.