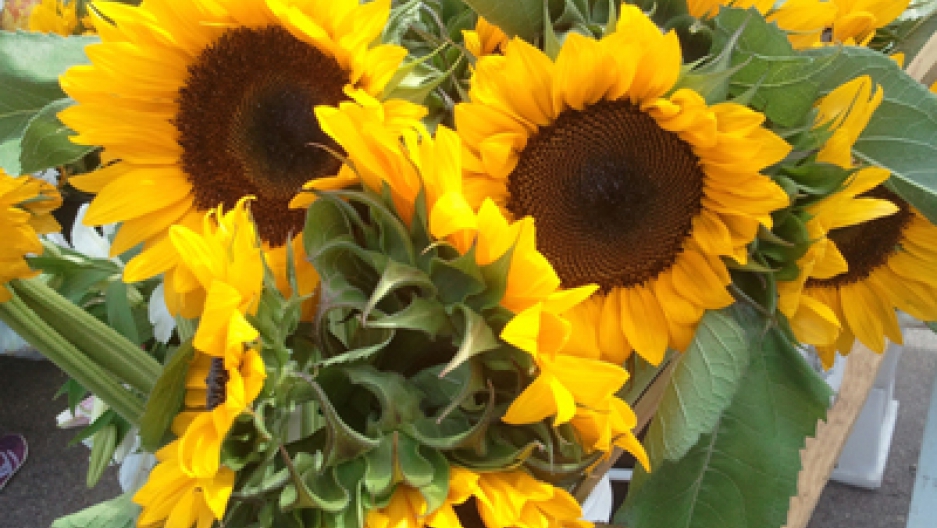 Story from Living on Earth. Listen to audio above for full report.

Sunflowers soak up the sun's rays and grow gloriously tall. Now, researchers in Japan are planting sunflowers to soak up radiation from the Fukushima nuclear disaster. The idea was tried back in the mid 1990’s near the Chernobyl power plant meltdown.

Soil scientist Michael Blaylock worked on that project. In the following interview, he tells Living on Earth's Bruce Gellerman how this clean-up-by-plant works.

BLAYLOCK: Well, the connection there is really that sunflowers are really good at taking up certain radioactive isotopes. And that's really the connection between the sunflowers and the nuclear power plants that we’ve discovered is that some of the fallout from the Chernobyl accident we were able to address through planting sunflowers in the affected areas.

GELLERMAN: So basically the plant just kind of grows, and as it grows, it's sucking the radiation out of the soil?

GELLERMAN: Well, you worked at Chernobyl back in the mid 1990s, did it work?

BLAYLOCK: It was very effective for the water. The soil was a little bit of a different story because cesium in soil is a little bit tricky. Strontium in soil. it works very well for us, but if you can't take both of them out, taking just the strontium doesn't necessarily get you to where you want to be if you leave the cesium around.

GELLERMAN: So why is cesium harder to get out then strontium?

BLAYLOCK: Well, cesium mimics potassium. The clay layers on a very small scale, the atomic structure, they have what we call, for lack of a better word, a cavity in between those clay layers. And the potassium fits very nicely into those cavities and that's the way that soils retain potassium. Well cesium, being very similar to potassium, fits in those same cavities and it becomes fixed in the soil and it is very difficult for it to come out. Whereas strontium is very similar to calcium and calcium is in a form that is very available to plants -- we don't have that problem.

GELLERMAN: Well, we're trying this at Fukushima, do you think it could actually work there?

BLAYLOCK: It could, given the right set of circumstances. You know, one thing we found in Chernobyl is, we came there a number of years after the fact. And so that gave plenty of time for that cesium to become fixed in the soil, and it's going to become very dependant on the soil types. You know, soils that have very high mica contents, certain clays, are going to be very difficult to remove the cesium once the cesium gets fixed. But under the right set of circumstances, they could be effective in removing those contaminants from the soil.

GELLERMAN: How do you get rid of the radioactivity in the plant?

BLAYLOCK: Yeah, the real process here is, what we're trying to do is, concentrate that radioactivity from the soil, which is a fairly low concentration, to a much higher concentration in the plant material. You still have to dispose of that plant material, but you move that particular contaminant or radioactive isotope from silica, aluminosilicate matrix in the soil, which is very difficult to deal with, to a carbon-based substance in the plant material. You concentrated that, so you have a lot less material to dispose of, and you can leave that soil, which is a resource that’s hard to replace -- you can leave that soil in place and just remove the contaminant.

GELLERMAN: And the radiation doesn't kill the plant as this is happening?

BLAYLOCK: Typically not. If they're high enough to where they're going to affect the plant growth, it's not going to be an area that's suitable for this type of approach.

GELLERMAN: I can see unexpected consequences from something like this. I mean, here you have these sunflower plants, and the seeds dry, and birds eat the seeds and then they fly off, and they're radioactive.

BLAYLOCK: Yeah, that could be a risk. I mean, typically, when we performed this we would always harvest plants before they seeded out because the main idea is to harvest biomass. You want to produce as much vegetative material as possible. And once the plants start producing seeds, it flowers and the seeds start forming, it's not producing a lot more vegetative matter to remove that contaminant, so typically once the plant flowered, we harvested and we would replant again. We're not interested in producing seeds.

Read the rest of this interview on the Living on Earth website.