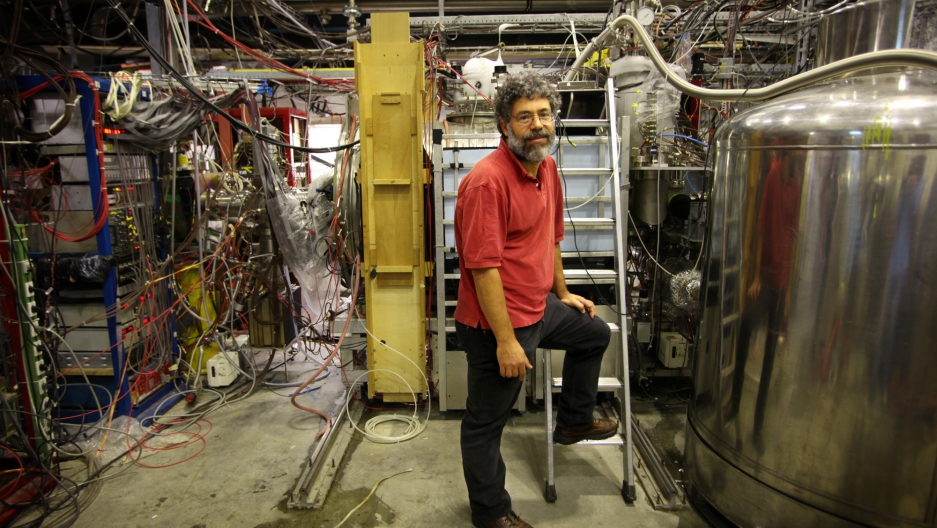 GENEVA, Switzerland — In the antimatter department at CERN, the world’s biggest science facility, a picture hangs on the wall showing the filmmaker Ron Howard surrounded by beaming scientists.

Howard’s adaptation of the Dan Brown novel Angels & Demons centers around a secret society that steals a small quantity of antimatter from CERN and hides it in the Vatican.

The book and the film’s scientific accuracy was limited to the convenient plot point that, when brought together, antimatter and matter annihilate one another in a terrific burst of energy, just enough, in this case, to wipe out Vatican City.

Now to reality: scientists at CERN announced recently that they had managed to create, isolate and hold a small quantity of antimatter for over 16 minutes — the longest by far that had been achieved.

So far so frightening? Not exactly. The Vatican can rest easy, explains Joel Fajans, a physicist from the ALPHA project, which made the breakthrough. There are fundamental reasons why an antimatter bomb will never be made.

The purpose of creating and holding antimatter, rather, is to study this strange twin of matter in the hope of solving one of the great riddles surrounding the creation of the universe — and thereby explain why we are here at all.

Basic laws of physics postulate that matter and antimatter should have been created in equal quantities in the Big Bang and gone on to cancelled each other out, leaving behind only energy. That means no stars, no planets, no people.

Instead, for reasons physicists can only guess at, matter gained a slight advantage over antimatter in the fiery moments after the Big Bang. A fraction of a percent of matter survived the mutual destruction and went on to form the galaxies, stars and planets.

But why should nature be so arbitrary as to choose one over the other? Why are we here at all? And, given that we are, why are we not made of antimatter instead?

“People are confounded by this. The question of what happened to antimatter is one of the grand challenges of physics,” Fajans told a GlobalPost reporter on a visit to CERN, located just outside Geneva near Switzerland’s border with France. “It is astounding, and it’s also embarrassing, that no one knows why this is the case.

“Matter and antimatter annihilate one another … We shouldn’t be here. But we are here. There is clearly an excess of matter … which means something is likely wrong with the theory of the Big Bang.”

Other than that, they should be the same, at least theoretically. If the ALPHA team’s investigations prove that they are actually different, antimatter will be in violation of one of physics’ most cherished laws, the charge, parity and time, or CPT, theorem.

CPT basically says that processes in physics should turn out the same even when you flip the charges, turn everything inside out and run it backwards. Put another way, CPT gives the universe a nice, harmonious symmetry. If antimatter contradicts it, other theories may unravel.

“As soon as you open a little crack, your imagination and ability to discover can run wild. Any difference will open up possibilities.

“It would show that there is some bigger, as yet unknown, set of laws. It would truly be the proverbial Big Deal.”

Fajans, an animated 53-year-old MIT graduate and tenured professor at the University of California, Berkeley, spends about half of his time at CERN, the European Organization for Nuclear Research. His workplace is a massive warehouse in the middle of which sits a bewildering array of machinery. It is here that Fajans and the ALPHA team managed to trap 309 anti-hydrogen atoms for up to 1,000 seconds, or just over 16 minutes, an achievement they announced in June’s edition of Nature Physics.

Read More from GlobalPost: South Korea says it made a glow-in-the-dark dog

People have been creating antimatter for decades. Indeed it occurs naturally, albeit rarely. If you eat a banana, for instance, some of the potassium will emit positrons as it decays in your body. Sodium also emits positrons and, by combining these with antiprotons created in a CERN particle accelerator (and then slowed down in a proton decelerator), they can make anti-hydrogen atoms.

Last year, the ALPHA team became the first scientists to trap anti-hydrogen, though only for a split second. Even this was a remarkable feat given antimatter is instantly annihilated when it touches anything, even air.

“Basically we had to make a bottle with no sides,” Fajans explained, referring to the web of magnetic and electric beams that held the atoms in suspension in a perfect vacuum.

By trapping anti-hydrogen for 16 minutes, the scientists are getting closer to being able to hold it in a state of calm and actually study it closely.

One method is to look at the effects of gravity. There is a theory, albeit an unlikely one, that antimatter will “fall upwards.” But first the ALPHA collaboration will look at the spectral qualities of antimatter — that is, does it glow the same color as ordinary matter when blasted by microwaves or light? This might reveal differences in the basic structure of antimatter.

Sadly none of this will provide an unlimited energy source of the kind that drives the Enterprise in Star Trek nor, happily, the kind that makes the bomb in Angels & Demons. The energy economics are unfeasible, Fajans explains. It takes far more energy to create antimatter than we can ever get out of it — a fact of physics that won’t change.

On the bright side, positrons are already used in medical diagnostics, in positron emission tomography, known as PET scans. Antimatter might also prove useful in the treatment of cancer by annihilating tumors without damaging surrounding tissue.

But most of the work is being done in the name of pure discovery. Fajans expects it will take another five to ten years before scientists have solid answers about antimatter, though he and his team plan to start experimenting on it this year.

As it happens, he is cautious about the prospects of finding anything unusual. The current laws of physics are built on a very solid foundation and revolutions don’t come that often.

But physics is by nature iconoclastic. Take the neighbouring Large Hadron Collider, the world’s biggest and most famous scientific experiment, which is hunting for the Higgs Boson, the so-called God Particle (a term physicists, not surprisingly, loathe.) Physicists need the Higgs Boson to exist in order to confirm their overarching theories. But it would be more interesting if it turned out not to exist, Fajans said.

“The fun starts when theories are broken,” he said, somewhat mischievously. “The LHC is on a campaign to find the Higgs Boson. They’ll probably find it, but it would be much more interesting if they didn’t.”