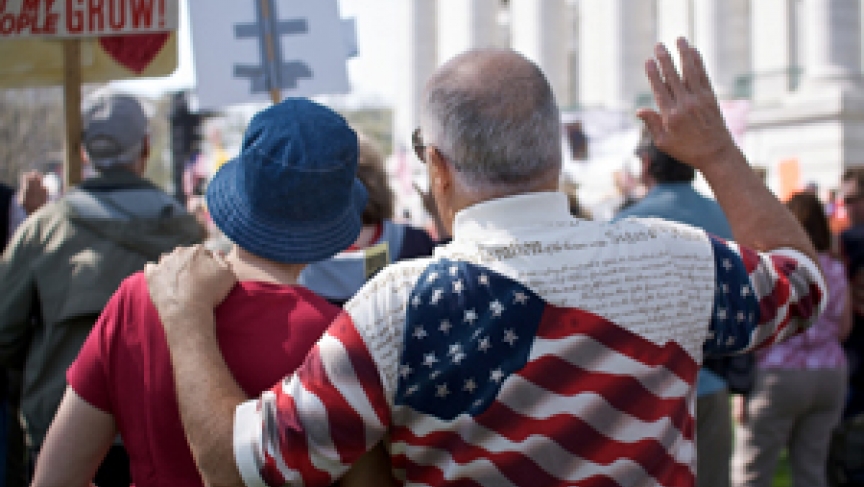 Story by Jason Margolis PRI's The World. Listen to audio above for full report.

A 12-member bipartisan Congressional committee has until November 23 to figure out how exactly to trim the debt by some $1.5 trillion dollars over 10 years. Then, they have a matter of weeks to sell that plan to both houses of Congress.

If no agreement is reached, automatic cuts kick in: $600 billion from the military and $600 billion from domestic programs. Both Democrats and Republicans shudder at this arrangement. But how does the Tea Party feel about steep cuts to national defense?

The Tea Party doesn't have a central spokesman or organizing body; it's a loose coalition of people united by beliefs in spending cuts, lower taxes and smaller government. To try and gauge the mood of Tea Party supporters, three people in different parts of the country -- who subscribe to their uniting principles -- were interviewed.

"We really need across the board cuts. And nothing can be a sacred cow, nothing can be off limits. And that's going to include defense," said Chris Littleton of Cincinnati, co-founder of the group The Ohio Liberty Council.

Littleton said the defense budget has become bloated. (It's come close to doubling since September 11th, 2001.) Littleton argued that's because the military has lost sight of its Constitutional mission.

"It does not include being the world's police, being the world's peacemaker, or trying to advance our culture or causes around the world as a singular purpose. It's for common defense," said Litleton. "And so if we are not directly threatened, and we are not involved in an altercation that we need to defend ourselves [from], then we can absolutely scale back our operations from throughout the world. So I'd be for both domestic and foreign military installations brought back, trimmed down, and hopefully many of them even eliminated."

Support for a smaller military runs counter to what many conservative Republicans espouse. But Tea Party supporter Jason Rink -- executive director of The Foundation for a Free Society in Austin, Texas -- argued that's because Republicans haven't been acting like real conservatives.

The new push to reduce the debt could result in cuts to the Pentagon's budget of up to $1 trillion dollars over a decade. That would be about 14 percent of its operating budget. Defense Secretary Leon Panetta said cuts that large would imperil the nation’s security. And such cuts would impact tens of thousands of people who work in the defense industry.