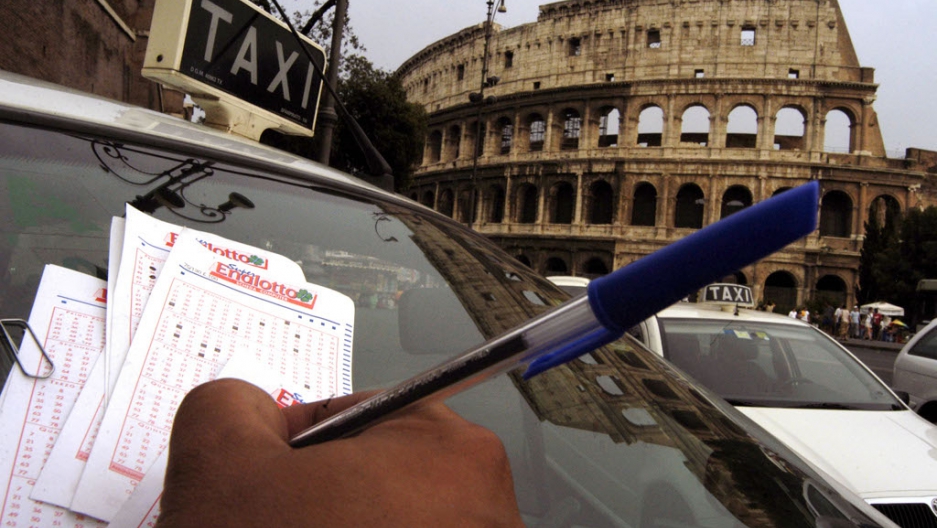 ROME, Italy — In a small roadside cafe in southern Tuscany, a loud metallic sound, like the crash of many bells, shatters the Sunday afternoon silence. A couple has just won at a slot machine-like game.

They have been playing for nearly an hour. Now they plan to stay longer, at least until they have spent all the money they have just won. This is a typical way of killing long summer afternoons, they say. They’re unsure exactly how much they have spent so far. “Less than 100 euros, that's for sure,” the man says. “And now we've won!”

It’s a scene that, at any given time, plays out all over this gambling-addicted country. The “macchinette mangiasoldi” (money eating machine) the couple has been playing has become ubiquitous in Italy over the past several years. There are now 380,000 of them, producing 31.1 billion euros in revenue in 2010, or about 500 euros per Italian, according to official data.

More from GlobalPost: Italy's sovereign debt crisis: is the euro worth it?

And the money eating machines account for just half the amount Italians spend on legal gambling, a sum that accounts for nearly 4 percent of gross domestic product. While Italy's economy is stalling, the gambling industry is booming, with 12.9 percent growth last year, and double-digit expansion projected for 2011.

The industry’s lucre has not escaped the attention of Italy's government, whose fiscal woes have become a major burden on the global economy — this week sparking global stock market sell-offs, fears of a double-dip recession and anxiety over a possible mammoth default. At 120 percent of gross domestic product, Italy’s debt is nearly twice as big as America’s, relative to the size of each country’s economy.

As such, lawmakers appears determined to tap into the gambling sector to shore up gaping fiscal deficits.

The emergency austerity budget that Prime Minister Silvio Berlusconi’s government approved in July — intended to reassure nervous investors — includes a little-noticed provision allowing 200 online casinos to operate in Italy. These will feed the country’s gambling addiction, by offering all the services of a normal casino, such as roulette and poker, from the comfort of home, or pretty much anywhere for that matter, via smartphone apps.

The government hopes that tax revenues and fees from the industry will help replenish empty coffers.

Yet the move has sparked outrage from consumer associations and civil society groups. “From today it is possible to become gambling addicts by law,” wrote one such group, Libera.

There’s little doubt that Italy has a gambling problem. With less than 1 percent of the world’s population, it accounts for a remarkable 23 percent of the global gaming market, estimated to be worth $368 billion last year.

“The size of the phenomenon should be enough to give everyone pause”, says father Alberto d'Urso, a Catholic priest and secretary general of the Consulta Nazionale Antiusura, which fights gambling and usury.

One in twenty Italians, he says, are at risk of “pathological gambling” — when the game gets so out of control that the participant’s entire life, occupation and family are sacrificed.

“I have heard of entrepreneurs who have bankrupted their businesses to pay for poker or casinos,” says Maurizio Fiasco, a sociologist and gambling expert who has been called upon as a consultant on the matter by the Italian Senate.

Testimonies collected by Rolando De Luca, a psychologist who for over 10 years has been counseling pathological gamers together with their spouses and relatives in group therapy sessions, tells of parents resorting to stealing money from their kids’ piggy banks to finance their addiction.

“There are no jobs and no money, and so people try their luck with what they can find, scraping the bottom of the barrel”, says D'Urso. He berates the government’s expansion of the industry as “irresponsible” at a time of crisis.

Even before the online options, Italians hardly lacked gambling opportunities. Aside from lotteries and four casinos, there are scratch cards for sale in cafes, supermarkets and even at post offices. Lotto and “super lotto” drawings occur three times a week, with multi-million jackpots. There are also bingo halls, and betting parlors where you can wager on nearly anything. And nearly every bar and café has a money eating machine.

Online poker is legal too, with a recently introduced payment system that encourages gamers to play more. Gambling is so common that shopkeepers often offer to give change in scratch cards rather than coins.

Fiasco, the sociologist, explains that Italy once had Europe's most sluggish gaming market, but since 1992 wave after wave of innovation and deregulation have transformed it into the continent's biggest, by a long shot.

“New offerings have mostly focused on high-frequency, low-sum games that have widened and widened the country's gambling base,” he says. Most importantly, he adds, this type of game ensures that most of the winnings are reinvested almost immediately, rather than being spent elsewhere.

It is not surprising, then, that the volume of the gambling market in Italy has more than doubled in the last five years.

“But the bucket has to stop somewhere. People have to keep some money, at least for eating,” he concludes.

More from GlobalPost: Silvio Berlusconi will not seek office in 2013