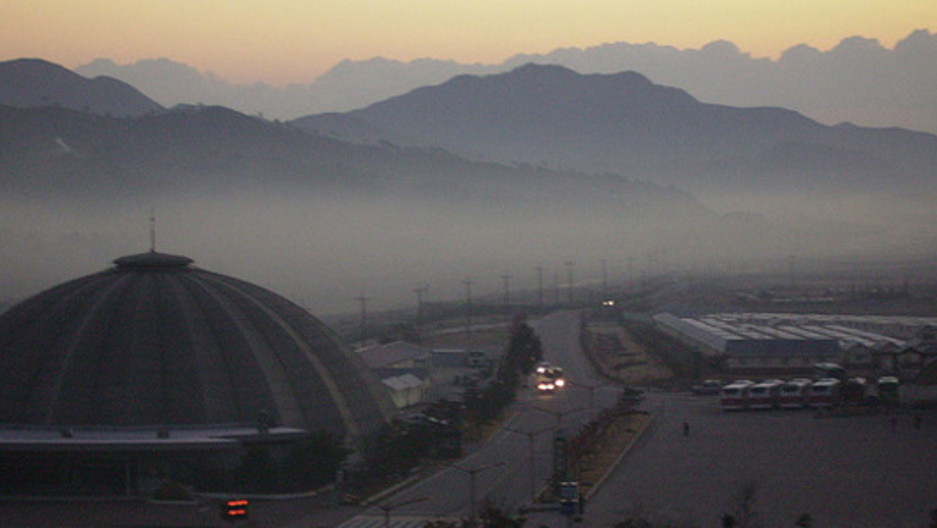 Share
North Korea cannot feed itself, and it's gotten little food aid over the past couple of years, except from China. That's due, in part, to its own belligerent actions, including attacks on a South Korean ship, and then a South Korean island and its decision to walk away from a denuclearization agreement. But now North Korea is once again in crisis, according to the World Food Program's Asia spokesman, Marcus Prior. "As the lean season gets deeper, as food supplies get more and more scarce, we're seeing more and more children being admitted to hospital with malnutrition. So we are very concerned," Prior said. "We continue to urge the international community to support our operation." The World Food Program's assessment early this year in nine out of 10 North Korean provinces found about 6 million people were either already malnourished or at risk. The WFP is now feeding 3.5 million of them, with other aid agencies helping the rest. So far, the United States has stayed on the sidelines. Washington notes that North Korea says it doesn't have enough money to buy food on the international market, but does have enough money for its nuclear program, its million-man military, and its annual Mass Games extravaganza, with a cast of 100,000 and a cost of many millions of dollars. This year's Mass Games just started. Daniel Pinkston, the International Crisis Group's Korea specialist, said while he believes the WFP's assessment, he's a little skeptical of Pyongyang's motives. "I certainly think the North Korean authorities are exaggerating the problem slightly in an effort to acquire international aid," Pinkston said. "Next year is an important year for North Korea, in terms of the succession and the transition to a new generation of leadership. The state wants to provide gifts and consumer goods to the population, to demonstrate that the state is performing well, and providing prosperity to its citizens." Whatever its internal imperatives, the North Korean government is suddenly playing a new game. Last week, North Korean envoy Kim Kye Gwan met for two days in New York with US negotiator Stephen Bosworth. Jonathan Pollack of the Brookings Institution, who just wrote a book on North Korea's nuclear program called "No Exit," said the Obama Administration may have decided to reengage with North Korea for one of the reasons China stays engaged. "The real Chinese fear, I believe, is that if North Korea is truly cornered, they will do something very dangerous that will then quite possibly elicit retaliation from South Korea, and will envelop Northeast Asia in a crisis that China could yet again not get away from, and that the United States would of course be involved," Pollack said. The talks last week seemed to bear at least the seeds of future progress. North Korea announced it's willing to go back to the negotiating table without preconditions. It walked away two and a half years ago. Kim Kye Gwan said as a first step, North Korea would like a peace treaty to end the Korean War. There was only a cease-fire agreement in 1953. According to the International Crisis Group's Daniel Pinkston, "A peace treaty to end the Korean War, from the North Korean perspective, would trigger other outcomes, including the withdrawal of US forces from South Korea or from Northeast Asia." Pinkston added that that's a non-starter from the US perspective. But even with a food shortage, North Korea is nothing if not ambitious at the negotiating table. It could point to how it's in a position of strength — with a nuclear weapons program, a long-range missile that might be able to reach the US territory of Guam, and a new space station from which they might test it. Still, Pinkston said, talks may yet be able to curb North Korea's nuclear ambitions "No matter how imperfect it may be, implementing some type of agreements that slow down the program, or delay the program, put some caps or constraints on it, that's better than nothing at all," he said. For each side, this may be a time of choosing the least bad option — for the United States, of preventing even worse instability on the Korean peninsula — for North Korea, coming to the table, at least in part so more North Koreans have food on the table.