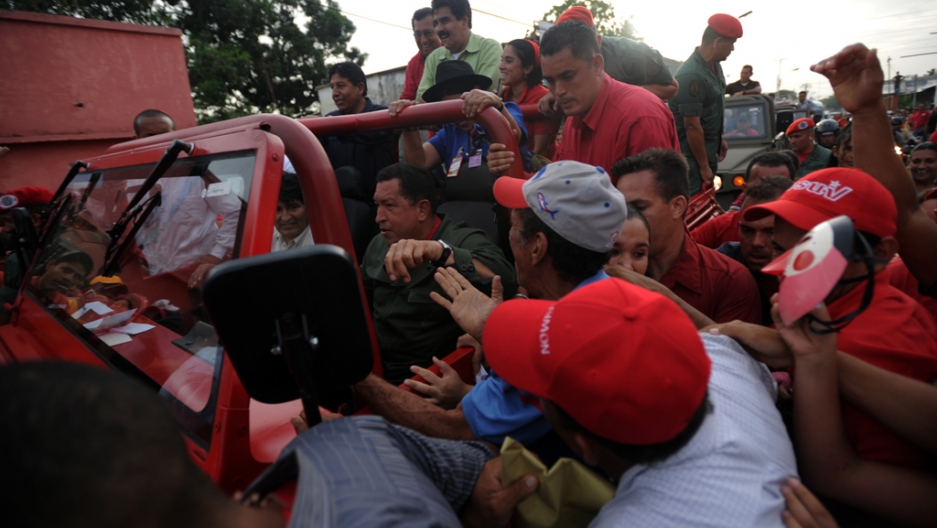 Venezuelan President Hugo Chavez and his Bolivian counterpart Evo Morales are greeted by supporters on their arrival at Sabaneta, where Chavez was born.
Credit: Juan Barreto
Share

Opposite him is the patch of land where Hugo Chavez grew up. Urquiola has lived there all his life and proudly describes the Venezuelan president as his own son, having been Chavez’s father’s best friend.

Now, Urquiola is anxious about Chavez’s cancer treatment. “I ask God to save him,” he said, adding that he remembers a “restless” child, fishing and walking with his father.

Chavez, who turned 57 last week, is currently back in Caracas having completed his first bout of chemotherapy in Cuba. The president remains restless, keen to impress upon Venezuela that he is healthy and ready for next year’s presidential elections.

GlobalPost in Venezuela: What does Chavez's illness mean for Venezuela?

Chavez’s silence last month led to wild speculation about the future of his presidency. It was fueled, in part, by confused and contradictory statements from his own government. He was not going to allow a repeat of that. “During the course of this week I have not lost focus on Venezuela for an instant,” Chavez said as he arrived back in Caracas.

The former soldier was tweeting furiously while in Cuba undergoing chemotherapy. Since his return, he has spoken almost daily on state television. The president wants to prepare his supporters for the images that are to come. He has already shaved his head. “In a few days you will surely see Chavez bald,” the president said on state television. “Do you remember Yul Brynner? I’ll be Yul Chavez.”

Just under 400 kilometers away from Caracas lies Sabaneta where Chavez moved, along with brother Adan, to live with grandmother Rosa Ines when he was still young. His relationship with his grandmother was affectionate and he remembers her fondly still, as do many in the region who talk of her sugarcoated “spiders” fashioned from papaya strips, which Chavez would sell on her behalf.

Ines was not wealthy. Her house was a mud hut. There was no refrigerator, running water or indoor bathroom. However, the ideals Chavez espouses as president reflect many of Ines’ own. His grandmother would encourage solidarity with those less fortunate, helping neighbors with food and clothes. The young Chavez would teach adults to read and write when he was young as part of a government-sponsored literacy program.

“At Rosa’s side, I got to know humility, poverty, pain, sometimes not having anything to eat,” Chavez once said, according to Bart Jones’ biography of the president, “Hugo!” “I saw the injustices of this world … . I learned with her the principles and the values of the humble Venezuelan, those that never had anything and who constitute the soul of my country.”

Sabaneta is about 20 minutes from Los Rastrojos and everyone there offers unflinching support for the president. Flor Figueredo knew the family well, living just opposite Ines. “He used to run around these streets playing with friends,” she said. “He was a very active boy, a very good student.” The 76-year-old retired teacher describes a humble family. “And look, now we have the president,” she added with a smile.

Of the president’s current battle with cancer, Figueredo is positive. “Science is very advanced. Miracles do happen. Here in Venezuela, there is no one else who can be president.”

Figueredo shows off black-and-white photos that depict the young Chavez with classmates. One shows him in a white T-shirt and baseball cap, in front of a giant map of Venezuela.

The president remembers Sabaneta fondly. “How I love that village — every corner, the friends of my infancy, the deep memories,” Chavez said last week as he announced new social programs for the region.

However, in the state capital of Barinas — an hour’s drive from Sabaneta through maize and sugar cane fields — the population is divided.

Unemployed electrician Javier Moreno, 45, sits beneath a bust of 19th-century revolutionary Ezequiel Zamora — a childhood hero of Chavez — in a city plaza. Moreno complains that the ruling family has forgotten its roots.

“If Chavez is a revolutionary and wants equality, his family would live like us in the barrios, without a car and breaking their backs every day to eat,” Moreno said. “They don’t live like that!”

After four years without work, Moreno believes the government has a part to play. “The revolution has its good and bad points. It serves some and not others. Today, if you want to find work but you're not a government supporter, you're screwed.”

Chavez studied for a year at the Liceo O’Leary secondary school in Barinas when he was 16. There, he continued to learn about Latin American independence hero Simon Bolivar, who is now synonymous with Chavez’s Bolivarian revolution. The socialist president also befriended the sons of a communist who had been incarcerated by dictator Marcos Perez Jimenez.

GlobalPost in Venezuela: A report card, 12 years of Hugo Chavez

Outside the school, nurse Ana Marquez de Mejias talks to current students. 70 years old, she is still animated when talking about the young Chavez whom she remembers well: “He was an intellectual from the beginning.”

Marquez de Mejias has no concerns that Chavez will not return to full health. She says, with clear excitement: “God has given his blessing to the president of Venezuela!”

When he was 17, Chavez was keen to fulfill his love for baseball — brought over to Venezuela by U.S. oil workers in the 1920s. The teenager wasn’t interested in joining the military but saw it as a stepping-stone to the game. The academy was right next to a baseball stadium in Caracas. He would train at the academy for a year or so and then drop out.

However, his love for baseball soon faded into one for the military. At the academy, Chavez read history insatiably, especially that of Bolivar late into the night. “I felt like a fish in water,” the president told Venezuelan television, about his time at the academy.

Chavez began to learn about the left-wing guerillas the military was meant to be fighting, and in doing so, he devoured the teachings that formed much of the political ideology he brought to the presidency.

Now, Chavez is looking to win his fourth consecutive presidential term, as elections loom in 2012. It’s not hard to see how his childhood in Sabaneta — the salesman touting his grandmother’s sugary arachnids, the teacher of those less fortunate and his ideology of sharing everything he had among neighbors — has, for better or for worse, made him the popular president he is today.

On GlobalPost blogs: Who holds the world's oil?