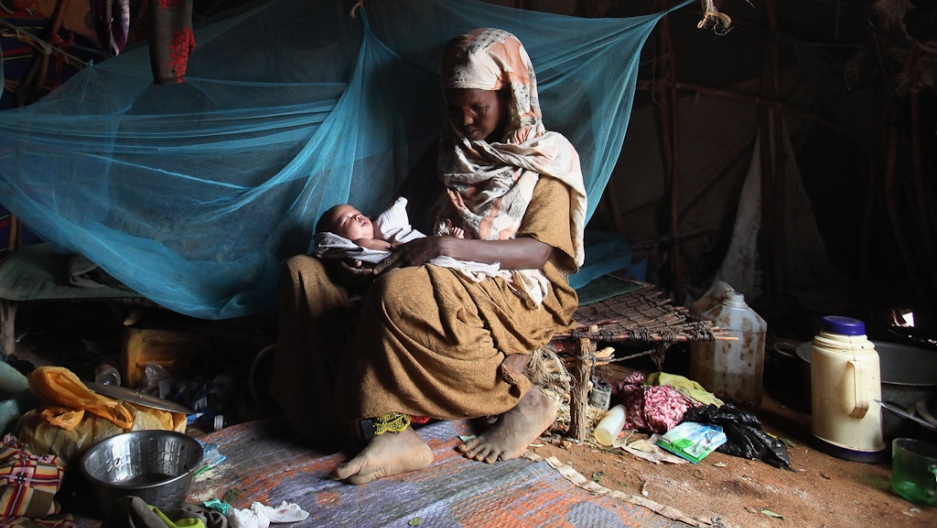 Somalian refugee Baar Abdi Khalif rests in her homemade shelter with her 20-day-old baby on the edge of the giant Dadaab refugee settlement on July 23, 2011 in Dadaab, Kenya. The ongoing civil war in Somalia and the worst drought to affect the Horn of Africa in six decades has resulted in an estimated 12 million people whose lives are threatened.
Credit: Oli Scarff
Share

NAIROBI, Kenya — Somalia's famine has already killed tens of thousands of people and is expected to spread across the south of the country in the coming weeks as failed rains combine with failed politics to create a humanitarian catastrophe that threatens millions of lives.

The Horn of Africa region has been parched by the worst drought in 60 years and the United Nations now estimates that 12.4 million people are facing severe food shortages and are in desperate need of aid.

But while the U.N. says $2.5 billion is needed to alleviate the suffering only a little over $1 billion has so far been committed by donor nations. On Monday the U.N.’s humanitarian chief, Valerie Amos, called on the international community to do more.

“A little less than two weeks ago, we declared a famine in two regions of Somalia,” said Amos, the Under-Secretary-General for Humanitarian Affairs and Emergency Relief Coordinator.

“Unless we see a massive increase in the response, the famine will spread to five or six more regions. Tens of thousands of Somalis have already died, and hundreds of thousands face starvation,” she told a press conference at U.N. headquarters in New York.

It is no coincidence that while the drought is reaching across East Africa, taking in Kenya, Ethiopia, Djibouti, Eritrea and even parts of Uganda, famine has only been declared in Somalia, a failed state without a functioning government and recurring civil conflict for the last two decades.

The two areas of Somalia where famine has been declared are both controlled by Al Shabaab, the Islamist extremist group with links to al-Qaeda. Amos warned that famine levels of malnutrition will soon spread across southern Somalia, a territory where Al Shabaab holds sway.

The famine is as much about failed politics as failed rains, said the president of the African Development Bank.

“While this is a tragedy triggered by the worst drought in 60 years, it is largely about our collective failure to end the Somali civil war," said Donald Kaberuka during a visit to Washington Monday.

Judging by historic data from the last famine in the early 1990s experts have predicted that 2,500 lives a day will soon be lost in Somalia. Aid workers fear that outbreaks of preventable diseases such as measles or pneumonia could up the toll among an already weakened population.

Chronic insecurity, lack of food, drought and the collapse of local markets are forcing 1,300 Somalis to cross the border into Kenya everyday while hundreds more cross into Ethiopia. The places they reach may not yet suffer from famine but they are facing drought.

The refugees arrive bedraggled, exhausted and often bereaved as loved ones die on the long trek to Dadaab, Kenya, an overcrowded complex of camps in northern Kenya that was built for 90,000, but now houses 400,000.

“It is hard to imagine the horror of mothers forced to leave their infants behind to die as they trek for weeks to reach safety,” said Amos.

The U.N. recently increased its estimate of the number of people facing food shortages across the Horn of Africa and now reckons that 12.4 million are at risk of starvation.

It says it needs $2.5 billion to fund the relief effort, but less than half this amount has been committed. “We urgently need another $1.4 billion to save lives, and we need it now,” said Amos.

Despite the life-threatening gravity of the crisis Al Shabaab continues to ban some Western aid agencies, including the U.N.'s World Food Program (WFP), which the Islamist rebels accuse of spying. WFP says the ban means it is unable to reach 2.2 million people at the epicenter of the crisis in southern Somalia.

Amos said talks are ongoing to gain access to the Al Shabaab areas. “We also face armed groups who say they do not want us there. We are doing all we can, through negotiations, to change that situation,” she said.

Despite the restrictions some aid is getting in. WFP has delivered 80 tons of an emergency peanut-based therapeutic food to Mogadishu and the International Committee of the Red Cross (ICRC) said that it has begun a mass feeding programme in southern Somalia distributing enough food to feed 162,000 people for a month.

Famine in the south has also forced tens of thousands of Somalis to seek food in informal settlements springing up across the war-torn capital, Mogadishu.

The Muslim holy month of Ramadan, Mogadishu’s traditional fighting season, has just begun bringing with it more violence as Al Shabaab increases attacks on the government and its 9,000 troops from the African Union.

Last week locals reported seeing the bodies of three AMISOM soldiers dragged through the streets by celebrating Al Shabaab militiamen, an act reminiscent of the treatment of U.S. Rangers killed in Mogadishu in 1993 when the last famine struck Somalia.