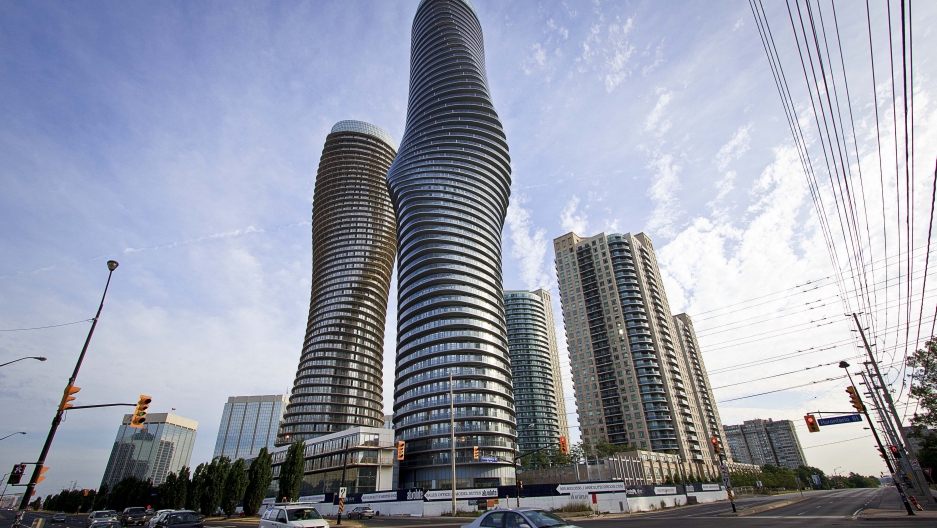 TORONTO, Canada — Can a building be sexy? Well, yes, if it looks like Marilyn Monroe, which is what locals have dubbed a spectacular condominium complex nearing completion in the Toronto suburb of Mississauga.

The project has attracted international attention and critical praise, a rare commodity in a place like Mississauga, a vast bedroom community synonymous in Canada with sprawling housing tracts, strip malls and a lifestyle centered on the car.

The reason for the adulation is clear at a glance. The original building (a second tower was added after sales of the first proved brisk) is striking. It’s a twisting and curvaceous landmark, which, at 56 stories, is visible for miles and has quickly become the city’s defining feature.

Officially called Absolute Towers, the building and its shorter and slightly less buxom twin, were the result of an international design competition in 2005 won by the MAD Architectural Design Studio of Beijing. MAD beat 92 other submissions, and company officials have credited the project with giving both Mississauga and their firm a global profile.

That’s a view shared by Hazel McCallion, the city’s long-serving octogenarian mayor, who says the project represents Mississauga’s arrival as a “global city.” “This is not the end; it is just the beginning,” she told reporters last fall.

So, is she right? Can a single building redefine an entire city?

Yes, but only if other conditions are met, said Richard Sommer, dean of the school of architecture at the University of Toronto.

Sommer cites the “Bilbao effect,” named after the catalytic impact of the Frank Gehry-designed Guggenheim museum on the historic Spanish city. The startling, non-linear design of the museum, which opened in 1997, drew instant international acclaim and, said Sommer, clearly put Bilbao “on the map.”

The results have been dramatic: Tourism spiked manyfold and the Guggenheim became a powerful symbol of Bilbao’s transition from its traditional industrial base to that of a service sector hub.

But besides an eye-catching design, the crucial factor in Bilbao’s success was the museum’s integration into the greater urban plan, said Sommer.

The project was supported with major improvements in public infrastructure, alongside the city’s old riverfront where the museum is located, but also with significant investment in public transit, including a new underground subway, rail lines and airport terminal.

By contrast, the history of development in the Toronto suburbs, of which Mississauga is by far the largest, can be fairly described as laissez-faire, an outcome of a political process that for decades has been shaped by the interests of powerful land developers.

Building projects have been traditionally designed in isolation and infrastructure, such as public transit, has at best been an afterthought. The Marilyn Monroe is typical. It’s a majestic addition to the Mississauga’s skyline but, at ground level, its neighbors are a parking lot and a gas station.

The building is beautiful, Sommer agrees, but he notes “its sexiest profile faces a six-lane road.”

None of that has stopped the project from attracting both local and international buyers and setting sales records. According to the developer, the first tower sold out within 24 hours and the second within weeks of its announcement.

The Marilyn Monroe has also stolen the spotlight from Mississauga’s older and grander sibling Toronto, which has been in the midst of an unprecedented condominium-building boom of its own. In the last 15 years, hundreds of projects have created thickets of glass high-rises around the city’s core and redefined its iconic skyline.

None of them, however, have been renamed after a sex symbol.