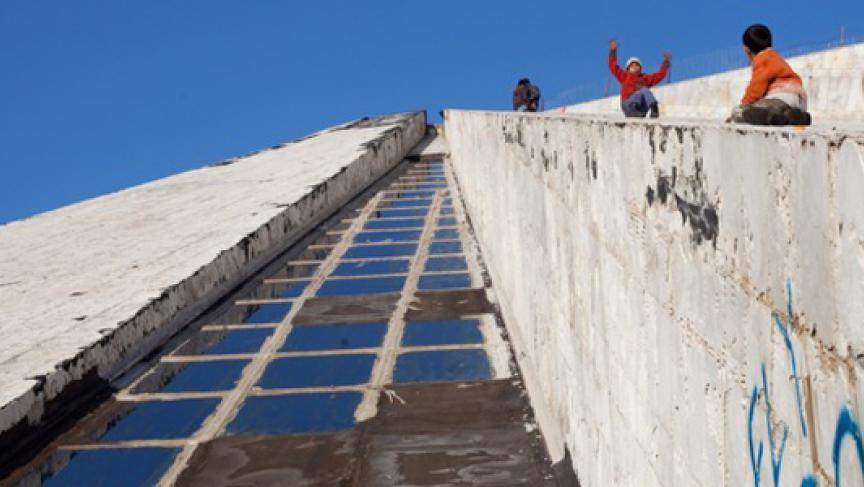 Share
We're in search of a pyramid for the Geo Quiz this time. It's not in Egypt but in Eastern Europe, about a thousand miles away. Like the Egyptian pyramids, this landmark was built to honor a leader. He was a communist dictator who who headed an oppressive regime. The leader's been dead for 18 years and the pyramid is in ruins. There are plans to tear down the landmark and build a government building in its place. Still don't know where we are? Here are more clues: The mystery city is the capital of Eastern Europe's last communist government. And the country was known as the hermit of the Eastern Bloc, hostile to both NATO and the Warsaw pact. It turned its back on China after President Nixon's breakthrough visit to Beijing in 1972 — because China was turning bourgeoise. What's the name of this European capital city with one prominent pyramid? The answer is Tirana, Albania and the landmark was built as a museum for the late Enver Hoxha. The Albanian leader kept Stalinism alive in Europe for decades after the Soviet dictator died in 1953. The pyramid is still standing but it's starting to crumble. In fact, during bloody anti-government demonstrations in Tirana back in February protestors broke off pieces of the pyramid to throw at other government buildings. Albanians have been trying to figure out what to do with the pyramid for years. Just last month, the parliament passed a law to tear it down. Even so, opponents of the demolition are gathering petitions to save the building. And the current president is deciding whether to sign the bill or side with the protesters. From Tirana, Matthew Brunwasser gives us a tour of the controversial pyramid.