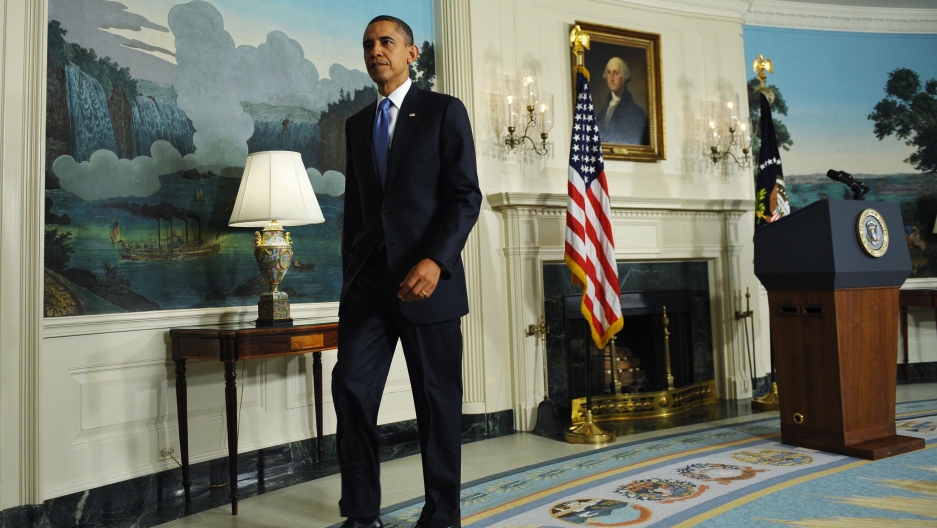 U.S. President Barack Obama leaves after speaking on the status of debt ceiling negotiations July 29, 2011 in the Diplomatic Reception Room of the White House in Washington, DC. Obama spoke after Republicans postponed a vote to Friday on their bill to prevent a U.S. debt default, and warned the United States was "almost out of time" to agree a deal to raise the nation's debt ceiling, insisting that a compromise was within reach.
Credit: Mandel NganAN
Share

While Tea Party activists were ultimately successful in putting reduced spending on the political agenda, almost no one is happy with the way this debt debacle played out — from mainstream Republican and Democratic voters, to Wall Street credit ratings agencies, to world leaders, to the players in the drama themselves.

Here's a quick check of the damage:

President Obama's approval ratings have slid to an all-time low. Only 40 percent of Americans now approve of his job performance, according to Gallup's latest reading for July 26-28. That's down from 46 percent in the previous poll, and from 50 percent after the May 1 killing of Osama bin Laden.

Obama's reelection campaign is now in serious trouble in key battleground states, such as Michigan and Ohio.

“We don't live in the perfect world that allows for the things that we hope to have to happen all of the time," White House spokesman Jay Carney said today of the debt compromise. Obama played a "substantial" role in the talks, Carney added. “In the beginning, middle and end, this process moved forward because of the president's leadership.”

If you're unhappy with the way this turned out, you're not alone:

Nearly 80 percent of responders to this Wall Street Journal online poll today say they are "unsatisfied" with the debt ceiling compromise.

Fitch Ratings today put U.S. debt "under review," joining Standard & Poor's. The U.S. must confront “tough choices on tax and spending against a weak economic backdrop if the budget deficit and government debt is to be cut,” Fitch said in a statement today, republished in this Bloomberg story.

The rest of the world isn't happy with Washington, D.C., either:

China, which holds more than a trillion dollars of U.S. debt, on Sunday demanded that Washington demonstrate "some sense of global responsibility."

Why is everyone so glum? The debt compromise doesn't address the real stuctural problems the U.S. economy needs to solve.

For a closer look at those problems — and a depressing collection of other challenges the global economy is facing right now — check out today's GlobalPost reporting project 7 Deadly Stories: A global economy on the brink.