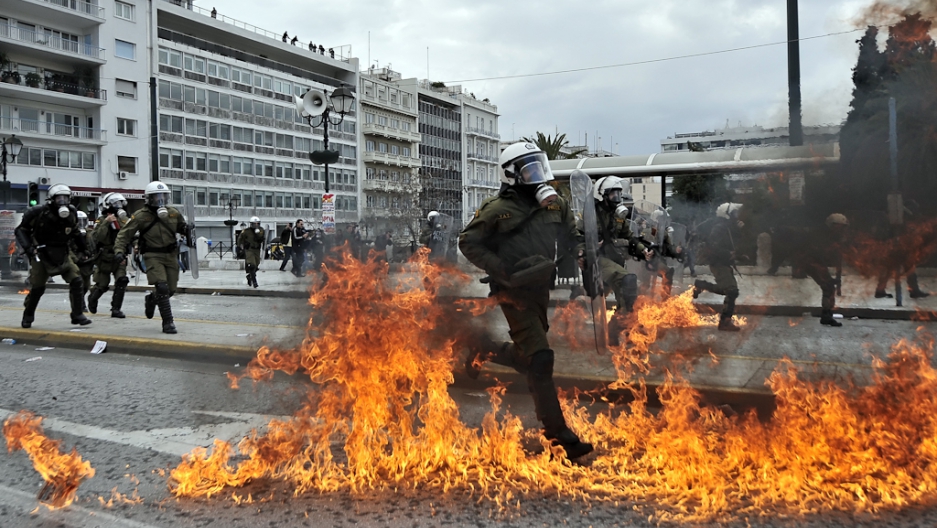 A police member runs through flames during clashes with demonstrators in central Athens on February 23, 2011.
Credit: Aris Messinis
Share

Editor's note: 7 Deadly Stories is a GlobalPost series on the main drivers of the global economy, all of which are facing severe challenges at once. Will the U.S. economy relapse? Is Europe finished? Will China, Inc. crash? Can Japan recover from disaster? How will the Middle East emerge from the ashes? How did the world become awash in debt? What is the true cost of climate change? These are the stories that are pushing the world economy, once again, to the brink.

That's the attitude around Europe at the moment, following yet another deal last week to postpone Greece's inevitable bankruptcy. Not even the declaration by rating agency Moody's that Greece was almost certain to default, nor the continued rise of Spanish and Italian interest rates has shaken the continent's confidence.

Long time observers of the euro zone understand that brinkmanship — and then a last minute agreement forged by France and Germany — is the way things get done in the world's largest trading bloc.

Which isn't to say that there isn't a lot of headline inducing sturm und drang before France and Germany's leaders put their heads together at a midnight meeting. And that drama is likely to continue, given the question that persists: Will the euro survive?

Of course it won't, Nouriel Roubini argued back in June, when Athens was on fire as people protested the harsh austerity package necessary to secure a bail-out. The zone, he wrote, is an artificial construct that simply doesn't work, given the incompatibilities between slow-growth members like Greece and dynamic economies like Germany.

More from Seven Deadly Stories: Can the Japanese economy recover?

Of course it will, says Stuart Thomson, chief economist of Ignis Asset Management who also writes a daily blog.

Thomson says the main reason is simple. "The euro will survive because none of its members could go back to their original currency, except Germany." There are 17 countries in the euro zone, in Thomson's view, all of their economies — except Germany's — are too weak to support a national currency with the global economy showing little sign of growth.

Thomson is not a euro-hater. The euro's original purpose was to eliminate the expense of currency exchange rates inside the European Union. The cost to businesses of holding so many different currencies that rose and fell rapidly was enormous. Initially the euro was a success and the euro zone countries grew rapidly. But it took the global crash of 2008 to reveal a flaw, according to Thomson.

"In eliminating currency volatility it (the euro) created an environment for interest rate volatility. It's less of a drag on economies than currency rates but nevertheless is not helpful."

The flaw in the euro's construction, available for all to see from the very beginning, is that it is a monetary union, not a political one. Fiscal policy is still set by individual member states. "To eliminate the debts of Euroland," Thomson points out, "you would need to eliminate the national parliaments of euro members."

Europe will tiptoe towards issuing its own bonds, but until then euro members still have to raise financing individually from the bond markets. Those markets can be cruel, operating in computer-powered nano-seconds of snap judgments.

The amount of interest a government has to pay on its bonds can be driven instantaneously, while it can take a couple of hours for the same country's prime minister and treasury secretary to meet and agree on a statement to try and calm the markets. And it can take a weeks before an emergency summit can be arranged with euro zone leaders to work out a solution to an individual member's debt problems, by which time a national economy can be wrecked for years.

One crisis leads to another and then to another as the euro zone is currently constructed. But until the black swan appears, most analysts here believe that the politicians will muddle through.

The big problem for the euro's survival is the same as for every country in the world: the lack of economic growth worldwide.

China has become Godot, with every weak economy in the world waiting for it to invest freight loads of greenbacks on within their borders. That is not a strategy for growth. But it seems to be the only one around at the moment. Newspapers around Europe are filled with speculation about Chinese interest in their economies.

For instance, the Greek newspaper E Kathimerini last weekend quoted China's ambassador Luo Linquan, “We believe that the so-called difficulty that Greece is facing today is temporary,” he said. “I am glad that an increasing amount of Chinese companies are expressing an interest in working with our Greek friends.”

The China Daily gave a Europe-wide credence to the ambassador's remarks. It says, "China has purchased more euro-nominated assets, rather than investing in U.S. treasury bonds." This underscores an important point. The immediate concern for Euroland and those E.U. countries like Britain that are not part of the euro: the crisis in America.

Vince Cable, Britain's business secretary told the BBC last weekend, "The biggest threat to the world financial system comes from a few right-wing nutters in the American Congress rather than the euro-zone."

The euro zone is as likely to survive as any other economy in these difficult times, provided Washington's rituals of brinkmanship reach their usual climax: a last-minute deal that doesn't quite solve the problem but calms the markets.

More from Seven Deadly Stories: The US economic engine sputters