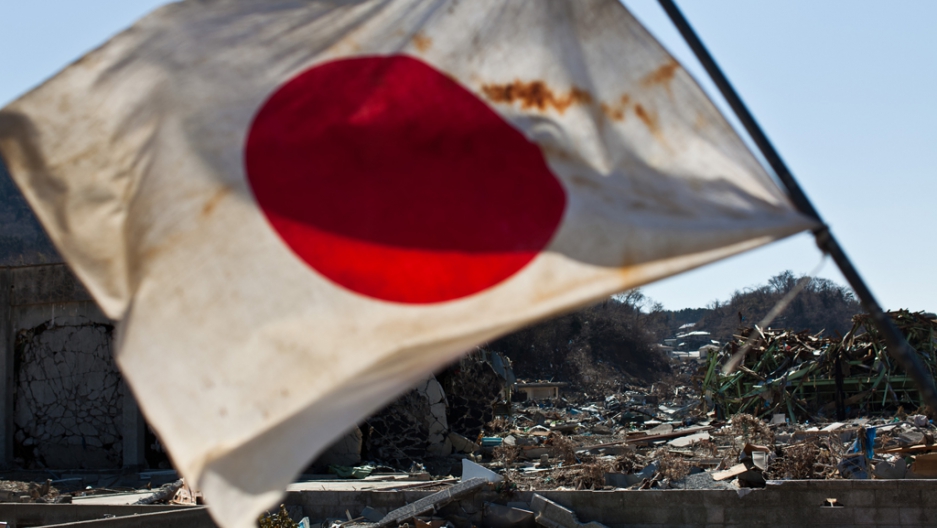 A Japanese flag waves in the wind amid the wreckage and devastation of the March 11 tsunami in the town centre of Onagawa, Miyagi prefecture, on April 6, 2011.
Credit: Yashuyoshi Chiba
Share

Editor's note: 7 Deadly Stories is a GlobalPost series on the main drivers of the global economy, all of which are facing severe challenges at once. Will the U.S. economy relapse? Is Europe finished? Will China, Inc. crash? Can Japan recover from disaster? How will the Middle East emerge from the ashes? How did the world become awash in debt? What is the true cost of climate change? These are the stories that are pushing the world economy, once again, to the brink.

TOKYO, Japan — When the U.S. sneezes, so the cliche goes, the rest of the world catches a cold.

But in Japan's case that is not strictly true: long before the U.S. debt ceiling debacle threatened to wreak havoc on the global economy, the world's third-largest economy was already ailing, though not yet terminally ill.

The March 11 triple catastrophe could not have come at a worse time for Japan's economy. Even before the waves began crashing ashore and the first nuclear reactor went into meltdown, Japan was debating how to reduce the highest debt in the industrialized world — twice the size of its $5 trillion economy — and pay for soaring health and social security costs.

The tsunami reconstruction bill alone will come to an estimated 17 trillion yen, according to the Cabinet Office — and that does not include the costs incurred by the crisis at Fukushima Daiichi nuclear power plant. While the affected region accounts for just 4 percent of Japan's GDP, the damage disrupted supply lines to Sony, Toyota and a host of other manufacturers.

That the repercussions of Mar. 11 were felt well beyond Japan's shores served as a reminder of its place at the heart of the global economy, despite two decades of stagnation and its eclipse, last year, by China.

Japan is being buffeted on several fronts: high commodity prices, a weak recovery in the U.S. compounded by the debt-ceiling debacle, and the mighty yen.

After it strengthened on speculation that Japanese multinationals would repatriate yen from foreign markets to cover the cost of earthquake damage, the yen's rise shows no signs of slowing.

That has added to the difficulties facing exporters, despite mounting a quick recovery from disruption to supply lines and, for the most part, sticking to their full-year forecasts. The U.S. debt crisis and turmoil in Europe has driven the dollar below 77 yen in recent days, a level not seen since the immediate aftermath of the tsunami.

The finance minister, Yoshihiko Noda, has given his strongest indication yet that financial authorities may intervene to weaken the yen amid concern about pressure on corporate earnings and a less resilient Nikkei average.

The currency is rising "too much," he said. "Our stance is clear. We will take decisive action against excessive exchange rate volatility."

There are causes for optimism. Household spending and industrial output rose in June, with manufacturers expecting the latter to return to pre-quake levels over the next two months. Retail sales also rose year-on-year for the first time since the earthquake.

This all lends weight to the Bank of Japan's view that the economy is in recovery and will start growing later this year.

But the warning signs remain.

Consumption and prices are stagnant, signaling that Japan's battle with deflation is far from over, and export-led growth could yet be derailed by the strong yen, as well as by debt crises in the U.S. and the euro zone.

Despite Japan's woes, the optimists appear — for now at least — to be in the ascendance. There is a view that the Mar. 11 catastrophe should be seen as the catalyst Japan needed to reassess its economic priorities, away from growth and towards more dynamism via private and foreign investment, as well as the creation of new "green" jobs Japan will need if, as the prime minister, Naoto Kan, has suggested, it breaks free of its dependence on nuclear power.

Then again, the government has barely begun to address structural problems that had dampened the prospects for growth well before the tsunami: its enormous public debt, the lack of progress on tax reform and the extra demands placed on its resources by its growing elderly population.

And having been stunned into respectful silence by the disaster, it won't be long before Japan's economic partners begin broaching uncomfortable subjects.

They will expect some movement on free trade. Before March, Japan's participation in a planned free trade pact covering the Asia-Pacific region had been frustrated by opposition from farmers and their allies in Nagatacho, the country's political nerve center.

Despite Kan's apparent enthusiasm for the Trans-Pacific Partnership, Japan's participation in the region's most ambitious multilateral trade deal to date is still in doubt.

And so is his future as Japan's leader. Foreign observers have looked on with a mixture of amusement and horror at the political sideshow that has accompanied what Kan describes as Japan's worst crisis since the end of World War II.

Only the foolhardy would wish to speculate on the timing of his departure, or the identity of his successor. But it is safe to say that the wider world craves a period of stability before it can be convinced of Japan's sense of urgency about its recovery.

Looking further ahead, Japan's policymakers will have to answer some awkward questions.

Is a rise in the sales tax the best way to finance debt and pay for social security? Is the country equipped to address competition from China and South Korea? With labor shortages looming, can it afford to dismiss calls to relax its immigration laws? Is it doing enough to harness the potential of women and young people, long undervalued at an incalculable cost to the country's dynamism?

The rest of the word is willing it to succeed, as Edward Chancellor said in a recent commentary for GMO, a global investment management firm based in Boston: "All that's needed is the will ... the world's admiration for the Japanese people has been rekindled by their stoic response to the most recent national catastrophe. If this spirit and sense of unity were directed toward Japan's economic revival, a third lost decade would surely be averted."