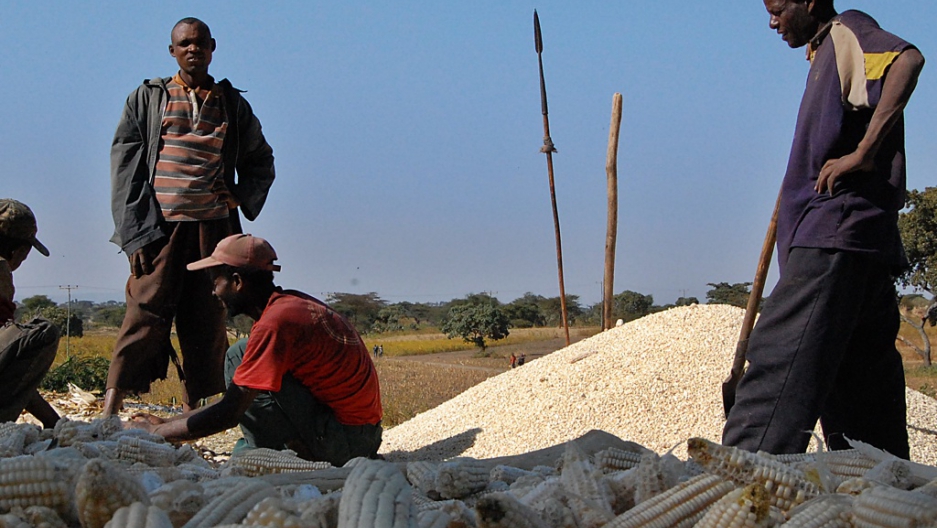 Ethiopian farmers harvesting corn cobs at Loke, about 215 miles south of the capital Addis Ababa, where massive expanses of land that were once lush with healthy maize stalks are now replaced with burnt out twigs even though rains had recently flushed the sun-blasted district. The government is trying to cope with climate change by resettling farmers near rivers and lakes.
Credit: Aaron Maasho
Share

In the face of climate change and increasingly severe droughts, should African governments resettle rural farmers and encourage new types of agriculture?

The world is rushing to get emergency food relief to the 11.5 million people going hungry in the Horn of Africa's worst drought in 60 years. In Ethiopia, President Meles Zenawi's government is seeking a longlasting solution to the problem by launching a resettlement program.

Ethiopia wants to group its scattered semi-nomadic peoples into permanent settlements, largely ending their mobile lifestyle that has sustained people for centuries.

Ethiopia has large expanses of land that were once lush with healthy maize stalks that are now replaced with parched twigs. Climate change is blamed for reducing the productivity of the land.

Not surprisingly, the Ethiopian plan is controversial.

Across Africa forced resettlement schemes, however well meaning, have often met with failure and created more hunger. Tanzania's Ujumaa effort in the late 1960s and 1970s to create socialism in the fields met with failure.

Mozambique's campaign in the late 1980s to push people in the cities back to the rural areas not only did not succeed, it was widely criticized for human rights abuses.

And in Ethiopia, in the mid-1980s, Col. Mengistu Haile Mariam's Marxist junta attempt to force highlanders across the country to fertile lowlands also failed. Tens of thousands of Ethiopians reportedly perished on the journey or died in their new, alien surroundings.

This time, however, Zenawi's government says the resettlement will be voluntary and will relocate people to nearby areas, instead of forcing them to make a mass, cross-country exodus.

In Ethiopia's Somali region, with about 1.5 million of the province's 5 million in need of food aid, the plan is to create villages near rivers and build irrigation systems, roads, health clinics, and schools, according to the Christian Science Monitor. The Ethiopian government sees this as a life-saving measure and as a way to help the pastoralists benefit from Ethiopia's double-digit economic growth. The World Bank has said it intends to give funds to the Ethiopian resettlement scheme from the bank's $500 million fund for "building long-term drought resilience" in the Horn of Africa region, the World Bank said in late July.

"Especially for pastoralists, the solution is development interventions," said Ethiopian Agriculture Minister Mitiku Kassa, "water-centered development. Most areas have surface water and there are rivers." In the dry regions of Somali and Afar, the government hopes 500,000 people in each will resettle, while in the western states of Gambella and Benishangul-Gumuz it wants 450,000 to move.

The pastoralist lifestyle is becoming difficult to sustain, says Eugene Owusu, the United Nations humanitarian coordinator in Ethiopia. "Therefore they need to look at alternative development solutions." Although initially donors were slow to support the program, he has "no doubt" it could have a transformative effect on struggling communities "if it's done well."

But critics of the plan warn that the resettlement may well turn out to be coercive and have the effect of removing people from their ancestral lands so they feel robbed. They cite an incident in which a family that was reluctant to leave saw their huts set on fire. A better alternative, say the critics, would be to give some of Ethiopia's estimated 9 million pastoralists services without trying to change with traditional agricultural practices.

However, climate change is making those traditional practices unsustainable. Ethiopia is trying to come up with a proactive plan to try to prevent future famines. But the jury is out on whether it will succeed.