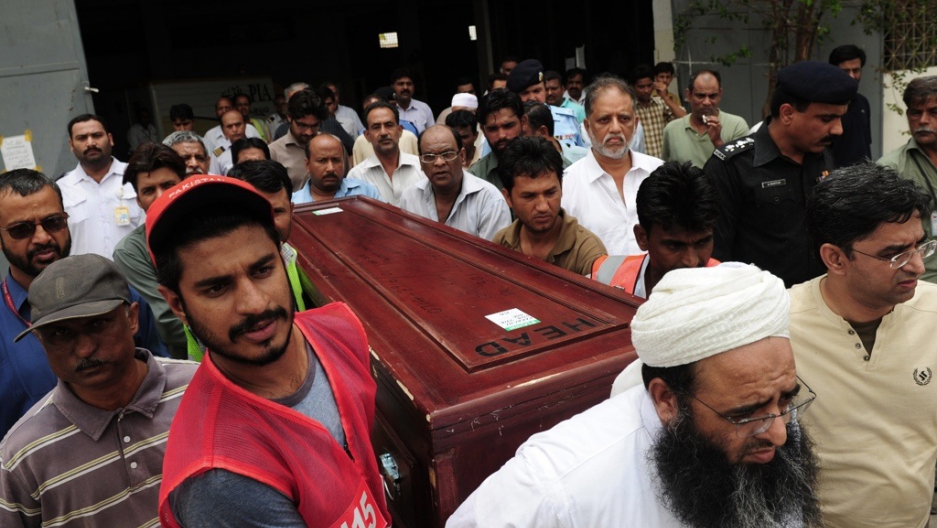 Relatives and members of the media carry the coffin of Pakistani journalist Syed Saleem Shahzad on June 1, 2011. Grief-stricken relatives demanded that Pakistan investigate the murder, which has been blamed on the country's intelligence agency.
Credit: Asif Hassan
Share

The attacks by security forces extend beyond terrorist targets, including both secular insurgents in Balochistan province and those perceived as working against the interests of the military and the spy agency, which is known locally as ISI. In all cases, human rights activists say the agencies have gone well beyond international laws governing war.

“Pakistan’s security forces are engaging in an abusive free-for-all in Balochistan as Baloch nationalists and suspected militants ‘disappear,’ and in many cases are executed,” said Brad Adams, Asia director at Human Rights Watch. “The national government has done little to end the carnage, calling into question its willingness or ability to control the military and intelligence agencies.”

Journalists, too, are increasingly being targeted for reporting negatively on the actions of ISI and the military.

Hamid Mir, a senior journalist based in Islamabad, said there are certain understood lines that a Pakistani journalist cannot cross. Especially, he said, when it comes to events in Pakistan’s tribal belt. He said the entire region had become a no-go zone for journalists.

“Dozens of journalists from the tribal belt have been forced to leave their respective areas because neither the security forces nor the militants like their presence there,” Mir said.

“Now there is no access for independent journalists in these areas. Whatever we hear or report is through the [ISI]. And if any journalist risks his life and tries to portray both sides of the picture, he is added to a black list.”

Mir pointed to the brutal killing of Syed Saleem Shahzad, an investigative journalist who wrote for a number of foreign media outlets. Unknown men kidnapped Shahzad in May, tortured and killed him. Human rights organizations and friends of the slain journalist blamed ISI, which they said was unhappy with his reporting.

Umer Cheema, another Islamabad-based journalist was picked up in the same way earlier this year, tortured and dumped on the side of the road. Cheema also blamed the secret agency for his kidnap and torture. ISI denies these charges.

Just a few days after the killing of Saleem Shahzad, another journalist, Waqar Kyani, who was doing an investigative story on Shahzad’s murder, was severely beaten up by half a dozen men dressed in police uniforms.

Police also raided the house of Atif Khan, a local TV journalist who reported a story from the place where Shahzad’s body had been found. Although all these incidents were reported to the government, no action had been taken.

Eventually, after bowing to an unprecedented protest campaign launched by Pakistani journalists, the government agreed to set up a commission, headed by a serving Supreme Court judge, to investigate Shahzad’s murder.

“I am hopeful this time,” Asma Jehangir, a former chairperson of the Human Rights Commission of Pakistan, said.

(GlobalPost in Abottabad: Bin Laden lived near Pakistani forces with US ties)

But journalists here are skeptical. Such commissions typically fall into obscurity, their reports never released to the public and their recommendations never implemented.

Pakistanis living in the tribal regions, most who have virtually no available recourse against extra-judicial killings, have been the worst affected.

In April, 38 tribesmen from the town of Lakray Shaikh Baba in Mohmind district, were forced to stand in a line as security forces sprayed them with bullets. All of them were killed. Local press reports said the men had refused to help security forces find a local militant commander.

The incident might have had gone unreported like so many others. But two senators, Ibrahim Khan and Senator Hafiz Mohammad Rasheed, raised the issue in Pakistan’s parliament on June 10, demanding a high-level investigation into the killings which, it was later revealed, included a 12-year-old child.

“I have provided names, ages and addresses of all the victims to the chairman of the senate demanding a judicial inquiry into this heinous incident,” Khan, a senator from northwestern Khyber Pakhtunkhuwa (KP) province, told reporters.

“Most of the deceased were related to each other,” Ibrahim said, adding that the security forces tried to cover up the incident by offering to pay the families about $3,500 each in compensation.

“This is not the only incident. These incidents have been occurring frequently in the tribal areas. But the only problem is that the media is not allowed to go there and report these human rights violations,” Ibrahim said.

(More from GlobalPost: How vulnerable are Pakistan's nuclear weapons?)

Before the apology, the armed forces repeatedly claimed that all of those killed in the incident had been militants. It was only after a BBC correspondent managed to sneak into the area and interview the families that the army and the government admitted that the victims had been civilians.

Jehangir said there was significant evidence that the armed forces had committed extra-judicial killings and human rights abuses.

“There are several eyewitness accounts that people were picked by the security agencies and later their bodies were found in Balochistan,” Jehangir, who is now the president of the Supreme Court Bar Association, said.

Jehangir said, however, she couldn’t say how extensive the human rights violations were because journalists were not allowed in the area. But, she said it was well known that extra-judicial killings were common during military operations in the tourist valley of Swat in 2009.

“There were widespread complaints of extra-judicial killings and human rights abuses in Swat,” she said. “I am not saying that the militants are innocent. They too have their share in this. But they are non-state actors. The state actors have double responsibility as compared to them.”

The identity of the author for this report was left anonymous for security reasons.