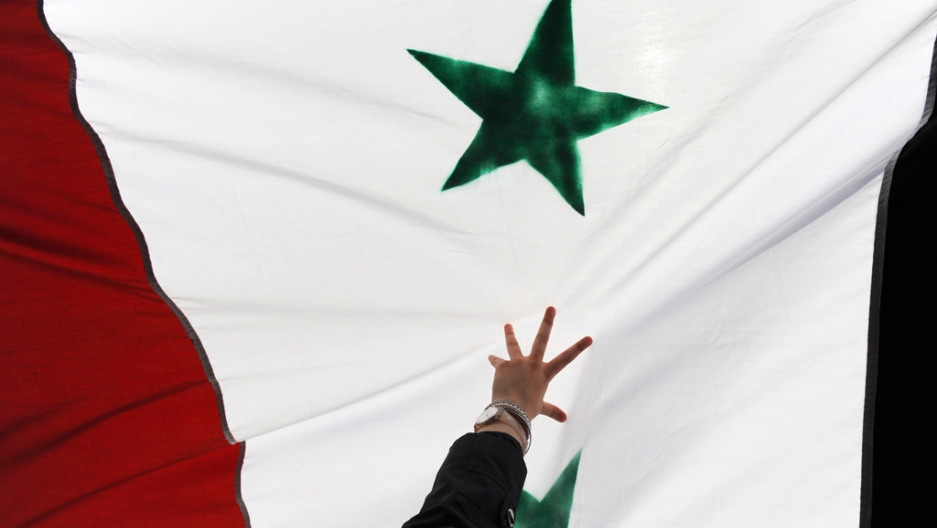 A woman holds up a Syrian flag during a demonstration gathering activists, including Syrians living in Turkey, opposed to Syria's regime of President Bashar al-Assad after the Friday prayers on July 29, 2011 in front of the Syrian consulate in Istanbul.
Credit: Bulent Kilic
Share

BEIRUT, Lebanon — For the past two months the widowed woman has scoured the Syrian city of Homs, a mother looking for her missing son.

Yazan, 16, was last seen being bundled into a white van by men from Syria’s security forces who had battered him with sticks until his nose and ears bled and he lost consciousness, according to his friends.

Yazan had been protesting with thousands of others in Homs for an end to the Assad family’s 41-year dictatorship.

“He did not vanish,” said Yazan’s mother. “The security forces have him, and I want him back.”

Yazan is a pseudonym, used at the request of the mother who fears for her son’s safety. Desperate to find her younger son, the woman has visited all the Homs branches of Syria’s notorious security agencies, numbering at least 17 different divisions.

More From GlobalPost in Syria: A Syrian soldier speaks

But in a country where security officers arrest and torture citizens with impunity, a single mother visiting the smoky offices receives no help. Time and again the men in leather jackets and pistols tell her they don’t have Yazan.

When she keeps demanding, they warn her to stop looking, threatening that they will arrest her older son who is 19 if she keeps asking them questions.

But the mother won’t stop asking.

“If my son is dead, I want to bury his body,” she told a human rights researcher. “And if he is alive I want to see him and smell him again.”

Enforced disappearances like Yazan’s have been occurring at the rate of one every hour since Syria’s uprising began in mid-March, according to the international rights group Avaaz, which has now documented almost 3,000 individual cases.

Under the terms of an international treaty, enforced disappearance is defined as the arrest, detention or abduction of a person by the state or agents of the state followed by the refusal of authorities to acknowledge the whereabouts of the missing person, thereby placing that person outside the protection of the law.

Enforced disappearance is a crime against international law, according to Amnesty International.

“We are not counting people who we know have been detained. We are strictly talking here about people whose families do not know if they are dead or alive. People who have disappeared,” said Wissam Tarif, director of Insan, a Syrian human rights organization that has worked with Avaaz to document cases of enforced disappearances.

The rights groups and their network inside Syria have spoken to close family members of all missing persons, all of whom have been told by authorities that their relative was not being held.

“Family members have been shouted at, abused, beaten and even detained when asking at security branches for the whereabouts of their relatives,” said Tarif.

Many of the 3,000 people went missing during anti-regime protests, but others have simply disappeared while walking the streets of their neighborhood, snatched by members of Syria’s fractious security forces, which include plain-clothes thugs, secret police and local members of the ruling Baath Party.

A lack of communication between rival security branches means a person can be released by one branch after interrogation only to be arrested by a different security branch for the same interrogation, say activists. This makes tracking down the missing all the more difficult.

Since March 15, Avaaz has documented the killing of 1,634 people in the regime’s crackdown, with a staggering 26,000 people arrested, of whom nearly 13,000 remain in detention. The Assad regime contests figures of those killed and arrested, saying that over 500 members of the security forces have been killed attempting to restore order.

The sweeping campaign of arrests and disappearances has targeted a wide cross section of Syrian society in what several of those affected have described as “a campaign of terror.” Not only have security forces rounded up street protesters, but they have also arrested doctors, engineers and students, anyone seen to be active in society.

Avaaz said citizens from Daraa have been a particular target for regime forces, which blame the city’s people for igniting the popular uprising.

Enforced disappearances in Syria began when Hafez al-Assad, President Bashar al-Assad’s father, ordered a bloody clampdown against an armed uprising by the Muslim Brotherhood in 1979.

About 17,000 Syrians disappeared between 1980 and 1987, according to a written statement to the United Nations Human Rights Council by Radwan Ziadeh, head of the Damascus Center for Human Rights Studies.

Wissam Araji, one of Syria’s disappeared, was last seen late on the night of April 21 in Duma, a town close to Damascus that had become a focus for protests.

“We do not know where Wissam is. I am scared for his life and scared that security comes and raids our house and takes me or any other family member,” said Alaa Araji, Wissam’s brother, in a case documented by Insan. “Since Wissam disappeared my mother did not stop crying and my Dad does not know what to do. His disappearance has paralyzed us.”

Abdel Aziz Kamal al-Rihawi, an 18-year-old Syrian, went missing the following day in Harasta, a town in the Damascus countryside.

A relative told Insan that Rihawi had contacted him by phone, saying, “They are shooting at everyone. I will go home as soon as we can get out of here.” That was the last time family heard anything from him.

Since July 21 Avaaz has documented more than 1,000 arrests with the number of enforced disappearances rising rapidly, as the regime steps up its efforts to repress dissent in the build-up to Ramadan, the Muslim holy month of fasting, which is expected to fuel further opposition protests as large groups of people gather together at homes and in mosques.

Avaaz has launched a petition among its 10 million members to urge key governments with influence in Syria — South Africa, India, Brazil, Kuwait and Qatar —to send human rights delegations to pressure the Syrian government to release the disappeared.

“Hour by hour, peaceful protesters are plucked from crowds by Syria's infamously brutal security forces, never to be seen again,” said Ricken Patel, Executive Director at Avaaz. “President Assad's attempt to terrorize Syrians into submission isn't working, but they urgently need the international community to demand the release of the disappeared and a transition to democracy.”

When Ahmad noticed he was being followed by the men from Syrian security, he called his daughter, Lila, to warn her he wouldn’t be coming home.

A respected figure in his Damascus neighborhood, Ahmad had been helping doctors who were treating wounded protesters, many of whom were receiving medical care in private homes after secret police began arresting the injured from their hospital beds.

For that, Ahmad, whose name along with his daughter’s has been changed for their protection, had attracted the attention of Assad’s enforcers. As they followed him into his office on July 2, Ahmad asked their names, jotting them down on a piece of paper for Lila to find, before submitting to arrest.

The names on the paper lead nowhere. The security branch said they’d never heard of Lila’s father and instead began asking Lila’s friends about her. She’s now in hiding, fearing arrest, moving between safe houses every two days.

“I feel insecure, angry, disrespected, humiliated, and most of all worried to death about my father,” said Lila, 25, in a case documented by Avaaz.

“I am afraid that he might get hurt, or they might kill him, God forbid, or that he might end up with a permanent injury. He is old, and they are torturing people all the time. … I hope we will see him again, but we cannot expect anything from this regime. My friend’s father was taken in 1983 and nothing has been heard of him since.”