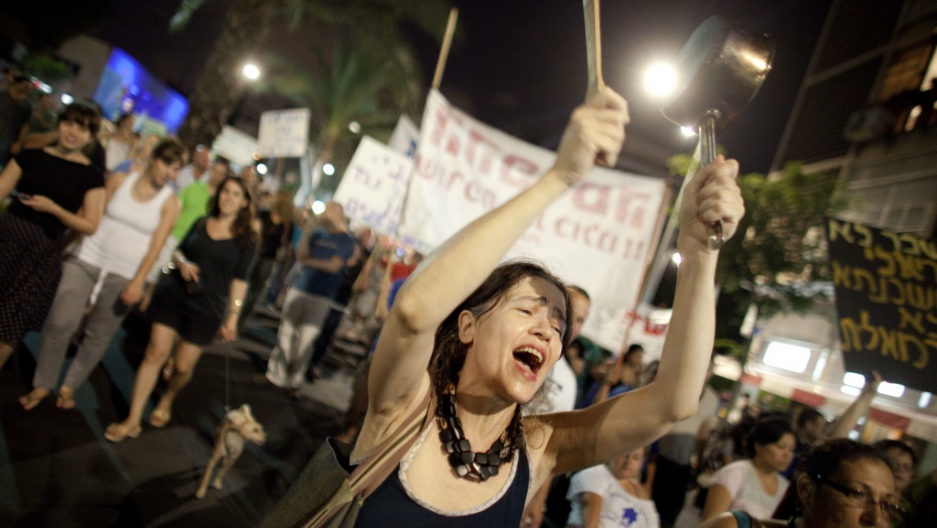 TEL AVIV, Israel — Sebastian Engelbrecht, a German radio correspondent stationed in Israel, found himself on the wrong side of a microphone the other day in Tel Aviv.

Semi-amused, Razi Barkai, Israel’s top morning news maven was asking him “Are you covering this? Are Germans really that interested in social protests in Israel?”

“What are you finding so interesting in this situation?” replied Barkai, saddling up for a proper interview.

“After a year in Israel, my landlord decided to raise my rent by 100 percent,” Engelbrecht said. “One hundred percent! It’s outrageous! Where can you imagine such chutzpah?”

As a late-July heat wave rolls up Israel from the Sinai desert, the country has been seized by a different kind of Egyptian fever: massive and unrelenting social protests taking over almost every last inch of public space.

What started as two unrelated social actions over a month ago — a Facebook campaign against inflated cottage cheese prices (an Israeli staple) and a doctors’ strike — has blossomed into a nationwide, multipronged collective revolt unprecedented in recent Israeli history.

It has also caught the government of Prime Minister Benjamin Netanyahu unprepared as he faces what is turning out to be the first serious threat to his government’s stability.

Two weeks into the tenant’s revolt and after urban tent camps mushroomed across Israeli cities, a clearly discomfited Netanyahu hastily called a press conference. He announced the future construction of reasonably-priced rental units and (addressing the cottage cheese people) the reduction of raw milk prices by one and a half pennies per liter.

Arnon Oshry, chairman of the Israeli Dairy Association, articulated the collective response the next morning: “Is he joking?”

The Arab Spring, it appears, is turning into a hot, hot Israeli summer.

Nachum Barnea, senior political analyst for the daily Yedioth Acharonoth, couldn’t hide the admiration in his voice when he said, “I don’t think this has anything to do with Syria or Libya, of course, but I can’t help but feel there is something of Tahrir Square in these protests, in the relentlessness of them and also in their lack of focus. People are simply fed up and unhappy, and they are taking to the streets until things change. Without specific demands for negotiation or anything. They just want change. And they are patient.”

More from GlobalPost: Forget the Middle East, here are the other revolutions you should know about

Barnea thus elegantly revealed a truth few here have dared to utter: as revolts toppled Arab leaders this past spring and Israeli government officials raced to sow the fear of regional instability among the population, regular Israelis sipping tea in cafés and chatting with friends at work could not restrain their esteem for what their neighbors had peacefully wrought.

“This is for our brave brothers in Egypt,” boomed a jazz singer at Jerusalem’s popular Israel Festival, in June.

The day following Netanyahu’s press conference, opposition leader Tsippi Livni got up at 6 a.m. and marched with striking doctors on their way from Tel Aviv to Israel’s parliament in Jerusalem.

“I hope and think these protests will bring about a change of government. The earlier, the better,” she said, uttering a sentiment unthinkable only days earlier.

Netanyahu’s own interior minister, Eli Yishai, a member of the religious Shas party that has historically identified itself as fighting for the poor, told Israel Radio he would “be out there on the streets with these people if I wasn’t part of the government.”

Jumping with some delay into the fray, Ofer Eini, chairman of the Histadrut Labor Union, called for talks about tenants’ rights with the government.

Israel’s citizenry seems to have collectively blown a fuse. The first unlikely indication this took place was six weeks ago, when Israelis returning from early summer weekends abroad began to notice that the same Israeli-made cottage cheese they bought abroad, particularly in Sofia, Berlin and London, cost more than double in their local supermarkets.

Activists discovered that Israeli cottage cheese prices had risen by more than 50 percent in the past two years, across the board, no matter the company. One of them started a Hebrew-language Facebook page called “I Also Won’t Buy Any Cottage Cheese This Month” and it caught fire.

“Israelis are sick of incompetent politicians hiding behind ‘security needs.’ They want action,” Barkai said after interviewing Engelbrecht. “Who knows where this is going to end up.”

The issue of tenant rights is possibly the most serious matter challenging the government as every social sector appears to be letting off steam. On Thursday afternoon, for instance, thousands of parents across the country gathered for various Marches of Strollers, demanding free, obligatory day care starting at the age of three months.

According to Michel Strawczynski, director of the Bank of Israel Research Department, one reason for Israel's robust economy during the global economic crisis has been its extremely conservative mortgage policy.

“It has always been very difficult to get a mortgage in Israel,” he said. As a result, many rent instead.

Frolicking in an entirely unregulated market (the concept of rent control has yet to reach Israeli shores), landlords like Engelbrecht’s regularly take advantage of renters' desperation.

On Wednesday night about 200 angry protesters, many of them young men shirtless in the night heat, marched past Netanyahu’s Jerusalem residence loudly calling for immediate action for young tenants.

Among them were Netanel Tzedek and Golan Atari, both 22 years old.

“Our government is like a fish,” Atari said. “It stinks from the head on down. Lieberman, Netanyahu, they’re all disappointments.”

Atari did not vote in the last elections. Tzedek, in the first elections of his life, voted for Green Leaf, a party championing the rights of marijuana smokers that has never garnered a seat in parliament.

“Who else was I going to vote for? Have you seen these bozos? He said, gesturing vaguely in the direction of Netanyahu’s residence.

They were standing feet away from a spacious, open white tent, unlike the compact hatches used by protesters downtown. This is the tent of Gilad Shalit, the Israeli soldier captured by Hamas five years ago.

His parents have been quietly sitting in front of the prime minister’s residence for 13 months. Protesters aimed to connect their struggle to his. One woman, walking past the Shalit tent, said “their struggle is also a social struggle, just like ours.”

“Not really,” said Noam Shalit, Gilad’s father, after the crowd had passed. “Our struggle is about life or death.” There has not been a sign of life from his son for more than four years.

“The government is doing nothing.”