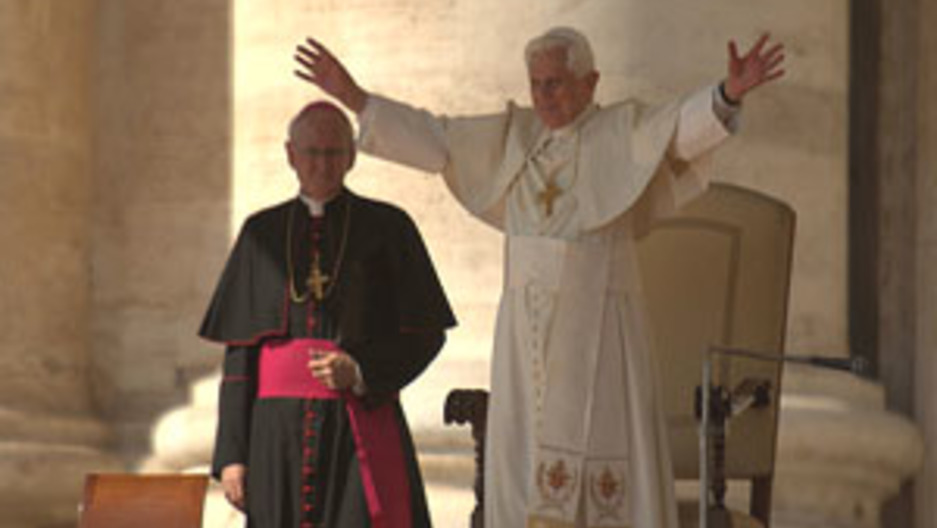 Pope Benedict XVI greeting pilgrims in 2004. The pope's envoy to Ireland left this week after the publication of the Cloyne Report. (Photo courtesy of flickr user Sergey Gabdurakhmanov)

The pope's envoy to Dublin has been recalled to Rome this week after the recent publication of the Cloyne Report earlier this month. The report details 19 additional child sex abuse allegations by clerical members of the Catholic Church from the Diocese of Cloyne amidst an ongoing worldwide scandal of sexual abuse and misconduct. Most of the cases in the Cloyne report were never reported to the police.

The report has inspired a wave of anger among the Irish people. In a chilling speech, Irish Prime Minister Enda Kenny condemned the Church for letting the abuse cases slip by unpunished.

"The rape and the torture of children were downplayed, or managed, to uphold instead the primacy of the institution, its power, its standing and its reputation," Kenny said in a speech to the Irish Parliament.

Cases from the Cloyne Report date as recent as three years ago, during a time when the Catholic Church promised the world there would be no more cover-ups. Criticism to the Church has come from within its own ranks as well.

"My reaction to the Cloyne Report was one of rage and devastation, followed by a kind of depression and a sense of shame of belonging to this clerical group," said Father Brian Grogan, a representative of the new Association of Catholic Priests, a group with over 300 members. Grogan noted that during the group's meetings, many members expressed dissenting opinions to the Church's policy, but were afraid to speak out for fear of being sent to a far-off diocese in such places as "outer Mongolia or Siberia."

Some, such as Irish Sen. Ronan Mullen, believe that the anger and shock the Cloyne Report has caused across the country could spur anti-Catholic sentiments among citizens.

"It's important the state respect the fact that, within the law, the Church has to regulate its own affairs," Mullen said. "There's almost a danger, behind the calls for separation of Church and state, there's a call for anti-Catholicism in some quarters."

Whatever the case, it is clear that relations between Ireland and the Church may be tarnished forever.

"When it comes to the protecton of the children of this state, the standards of conduct which the Church deems appropriate, cannot and will not be applied to the workings of democracy and civil society in this republic" Kenny said. "Because children have to be, and will be, put first."