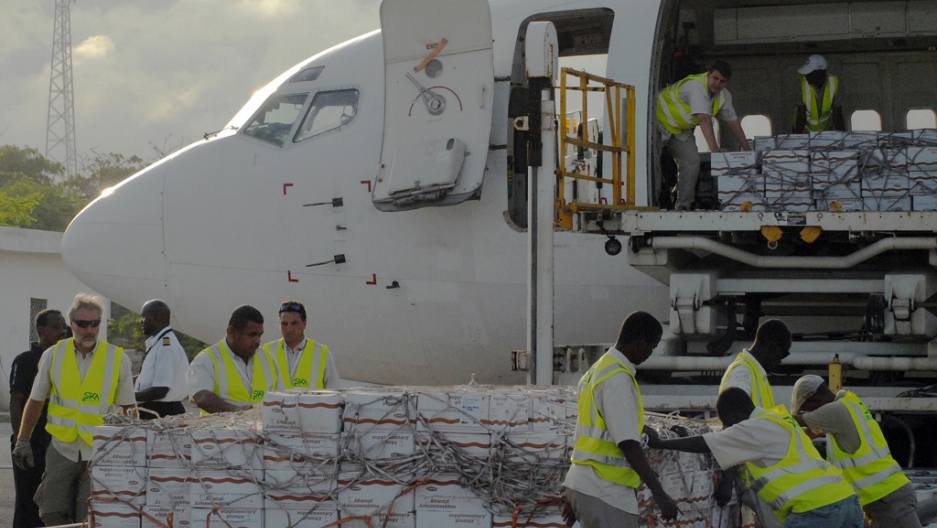 The first airlift of humanitarian food aid arrived at the Aden Abdulle Osman International Airport in Mogadishu, Somalia on July 27, 2011. The World Food Program airlifted 10 tons of emergency supplies to Mogadishu to feed thousands of malnourished children in drought-hit Somalia. Somalia is the country worst affected by the Horn of Africa's prolonged drought - the region's worst in 60 years - that has put some 12 million people in danger of starvation. But Somalia's Al Shabaab rebels are blocking distribution of food aid.
Credit: Mustafa Abdi
Share

Millions in Somalia are hungry and the world is trying to help but Somalia's Al Shabaab rebels are having none of it.

A famine has been declared in southern Somalia and the United Nations World Food Program is sending tons of food but the Islamic extremist insurgents of Al Shabaab are blocking the aid. The rebels have burned food and medicine and killed charity workers as part of their long-running campaign against international aid groups, according to a U.N. report.

The U.N. and the United States blamed Al Shabaab, which is allied to Al Qaeda, for worsening the food crisis in Somalia, where famine has been declared in two regions largely controlled by the militants.

"The single greatest obstacle to humanitarian assistance in Somalia during the course of the mandate has consistently been the denial of access by armed opposition groups, principally by elements of Al Shabaab," stated the U.N. report, according to Reuters.

The report said some U.N. agencies working in Somalia suspected local organizations they funded and funnelled supplies through were paying money to Al Shabaab, which the group called "taxes."

The report details incidents in which Al Shabaab officers demanded bribes from U.N. and aid agency officials to allow them to work in rebel areas and, in some cases, the rebels burned food stocks and medicine when cash was not paid.

Al Shabaab surprised aid groups in the region this month when they pledged to reverse a ban on food aid that they imposed in 2010, but they later said embargoes against the U.N. food agency, WFP, and some major aid agencies would remain.

Political analysts in the region say that the famine declaration has put the rebels in a difficult position.

They may need to open their regions to food aid for fear of a public backlash if they do not, but some of Al Shabaab's most hardline leaders do not want to permit Western organizations to distribute food in their territory.

Somalia's famine is "very, very urgent" said famous Somali model, Iman, who urged that the international aid agency, Save the Children, be permitted to distribute food. Children are suffering severe malnutrition and need consistent food over a long period of time to be healthy, said Iman in an interview with the BBC.

But the Al Shabaab rebels have put their political agenda ahead of the hunger of the people in areas they control, according to the U.N. report.

In one incident in late 2010, an Al Shabaab commander made a speech to local people, warning them against accepting foreign help, said the U.N. report.

"You can eat anything except food aid," he told the crowd, according to the report.

WFP has said it cannot reach more than 2 million Somalis now facing starvation in the areas controlled by Al Shabaab.

WFP officials say they will try to access the Al Shabaab areas over the next week and they will consider dropping food from aircraft as a last resort if the rebels prevent them from reaching the hungry people.

The report says the rebel group's contingent of foreign fighters drives the hostility towards charities, especially those deemed Western or Christian.

"Evidence also pointed towards the negative influence of foreign elements on Al Shabaab leaders who were viewed as being the most obstructive to international aid delivery," the report said. Al Shabaab is reported to have several hundred foreign jihadists fighting alongside its Somali rank and file, according to security sources in the Horn of Africa.

The report said al Shabaab commanders ask aid groups for an initial payment of $10,000 for access to the areas it controls followed by a registration fee of another $10,000 and payments of $6,000 every six months.

The rebels also demanded 20 percent of the value of all food and other supplies shipped through their areas and charged a duty of 10 percent on all vehicles.