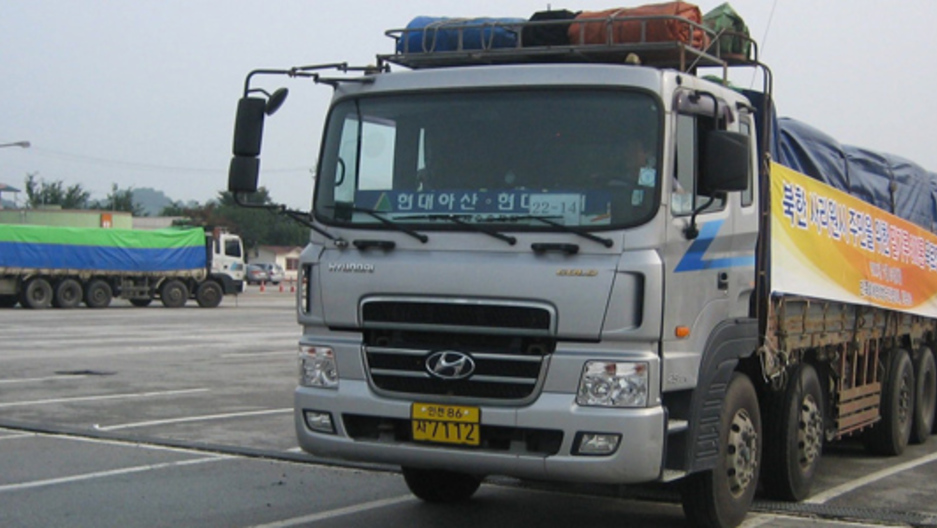 Share
South Korean civic groups delivered hundreds of tons of flour to North Korea on Tuesday. For the past year, most forms of cross-border humanitarian aid have been banned, after Seoul blamed the North for sinking its navy ship in March 2010. But the South Korean government still isn't easing its own stance on providing official relief. At the Imjinak Peace Park, a convoy of flatbed trucks are loaded with sacks of flour. Rev. In Myung-jin of the Korea Sharing Movement said the 300 tons of flour will help feed 22,000 North Korean children. But he said aid from charities alone can't help all those in need. "Our support through the NGO is very little, not enough to prevent the starvation in North Korea," he said. "So we try to urge our government to support North Korea." But even though the government in Seoul now allows private aid to the north, it still won't provide any official assistance. That, even as the UN World Food program warns that many North Koreans face a severe food shortage yet again. The European Union has its own concerns about providing aid to North Korea; still, it recently announced a plan to dispatch about $14 million worth of relief. But the EU's change of heart hasn't swayed Seoul, according to Cho Joong Hoon, director of the Humanitarian Assistance division at the South Korean Ministry of Unification. Cho Joong Hoon said EU officials decided to send emergency aid based on what they witnessed after visiting there. But Seoul won't send aid to the North because of current disputes, which include the sinking of a South Korean warship and the bombardment of Yeonpyeong Island in 2010. Making sure the food actually reaches those who need it is another concern. Europe said it has been given unprecedented access to ensure that North Korea's military won't siphon off the aid. Private aid groups say they are also monitoring food distribution. Park Chang-il, who works with an aid group that produces tofu and soy milk at factories in Pyongyang, said he relies on his North Korean colleagues there. "When it's possible," he said, "we deliver the products to the school or location ourselves. But when we can't go we ask our North Korean partners to send us pictures or documents showing that the food was distributed to those who need it." But some observers say corruption is so endemic in North Korea, that it's impossible to prevent some food aid from being diverted. Shin Ju Hyun, chief editor at The Daily NK, a news website that relies on sources inside North Korea, said he's not even sure there's really a severe food crisis taking place right now. Hyun said based on what he learned from North Korean defectors and soldiers on a recent trip to the Chinese border, he didn't feel that the food situation was any worse than it has been in previous years. One difference, he added, is that because of a recent currency revaluation, some people who used to buy food on the black market can no longer afford it. Hyun said despite Pyongyang's own very public requests for food, he thinks the regime might be stockpiling aid for next year. The north is planning a celebration to mark the 100th birthday of founder Kim II Sung and it wants to present an image of power and prosperity. North Korea propaganda analyst Brian Myers said posters began appearing in North Korea in 2008 depicting families sitting at tables with various meats piled on top. But he said as it became clear that Seoul wasn't going to send food aid, those images started to change. "In January 2010, a new poster was issued which showed a vegetarian table, there was no more meat on display," Myers said. "Instead, there was a lot of rice, and potatoes and corn, things the regime could already lay claim to providing its people. And this downscaling of public expectations seems to be continuing even now." Myers recently travelled to the north, and said he saw many children who showed signs of malnutrition, even in relatively affluent Pyongyang. That could be a sign that the public's expectations there might be pretty low already.