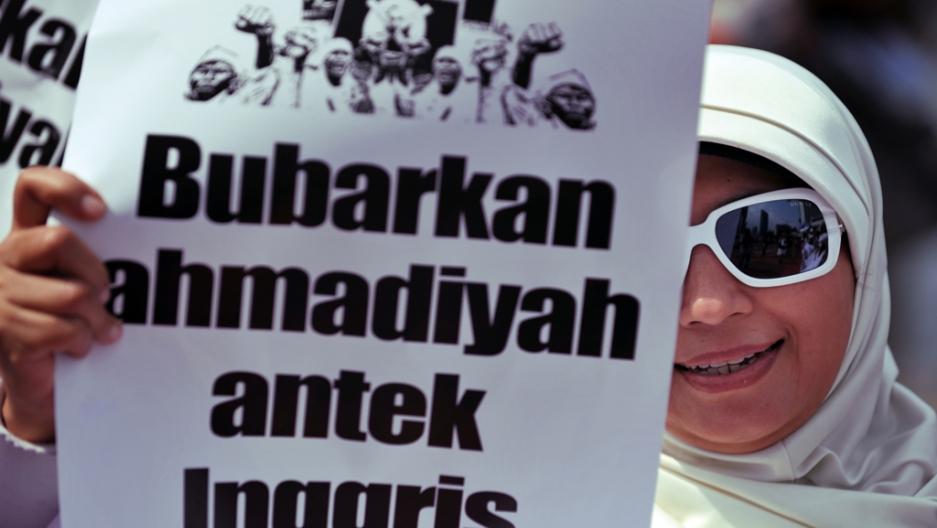 The 12 men they were praying for were on trial for taking part in a brutal attack on members of the minority Islamic sect (graphic video) known as Ahmadiyah in West Java earlier this year. Three people were killed in the assault, and several others were seriously injured.

The chanting outside the courtroom on Thursday echoed the shouts of encouragement from the crowd of about 1,500 people that stood idly by and watched as the Ahamdis, who had been stripped naked, were beaten with wooden poles and stones.

Although attacks against the Ahmadiyah community are relatively frequent in Indonesia, this one was particularly violent and was recorded on video and posted to YouTube for all to see.

Despite a public outcry from Indonesia’s majority, which tends to be religiously moderate, the court did not find any of the men guilty of manslaughter or murder. The harshest sentence any of them received, in fact, was six months in prison for a combination of misdemeanors like public incitement and destruction of property.

The verdict, human rights groups said, represents another blow to Indonesia’s reputation as a beacon of religious tolerance.

“The Cikeusik trial sends the chilling message that attacks on minorities like the Ahmadiyah will be treated lightly by the legal system,” Elaine Pearson, the deputy Asia director for Human Rights Watch, said in a statement.

Indonesia’s 200,000 Ahmadiyah members identify themselves as Muslim but don’t recognize Mohammad as the last prophet, one of the central tenets of the Muslim faith. The difference has led to resentment among Indonesia’s small, but vocal and politically powerful, population of hardline Muslims.

Although Indonesia’s constitution nominally guarantees freedom of religion, few have been successfully prosecuted for attacks on Ahmadis, which have included the burning of mosques, homes and violent attacks like the one on Feb. 6.

The Indonesian government, bowing to political pressure from conservative groups, made matters worse in 2008 when, in an effort to diffuse growing religious tensions, signed a decree calling on Ahmadiyah to “stop spreading interpretations and activities that deviate from the principal teachings of Islam.”

Since the decree, attacks against Ahmadiyah have increased dramatically, from three incidents in 2006 to 50 in 2010, according to the Setara Institute, a nongovernmental organization that monitors religious freedom.

“We’re very tolerant of other religions — Christians, Buddhists, anything. But for those claiming to be Muslims that have stepped away from the path of Islam, we are very intolerant,” said Agus Setiawan, who headed the team of lawyers that defended the 12 men.

Rights groups say that the government decree, and a failure by the courts to ever successfully prosecute the attackers, has led to complicity among local communities and local police. Footage from the Feb. 6 attack, for instance, showed local police casually watching from the sidelines as the Ahamdi men were beaten to death.

In the ensuing case against the attackers, Human Rights Watch said that police did not conduct thorough investigations and prosecutors sought reduced sentences on the basis that Ahmadiyah provoked the attack.

Jan Marinka, head of the Serang prosecutor’s office, said the villagers had intended to gather together to pray peacefully and that the verdict “reflects a sense of justice.”

“Prosecutors saw that they [the 1,500 villagers] didn’t go out with the intent of doing what they did. It was an excess, out of anyone’s control,” he said.
Despite the verdict, several points have cast doubt on this conclusion.

Andreas Harsono, a prominent Indonesian human rights activist, said the intent to incite violence is proven by the fact that Ujang Arif bin Abuya, the most senior of the 12 on trial, sent text messages calling for Ahmadiyah to be bubarkan, or broken apart, several days prior to the attack.

“Why do you need more than 1,000 people carrying machetes to have a peaceful dialogue?” asked Harsono, adding that several witnesses who were identified and had agreed to testify were never called to stand.

He also pointed to the fact that the group all wore blue ribbons pinned to their shirts, a move some say was intended to differentiate Ahmadiyah members amid the confusion of a premeditated attack.

The Ahmadiyah member charged with provoking the violence will go to trial next week. But even after the court battles wrap up, it is likely Ahmadiyah will continue to face pressure.

“I hope that Ahmadiyah just becomes its own religion then we’ll definitely respect that. But they just can’t call themselves Muslims,” Setiawan said.