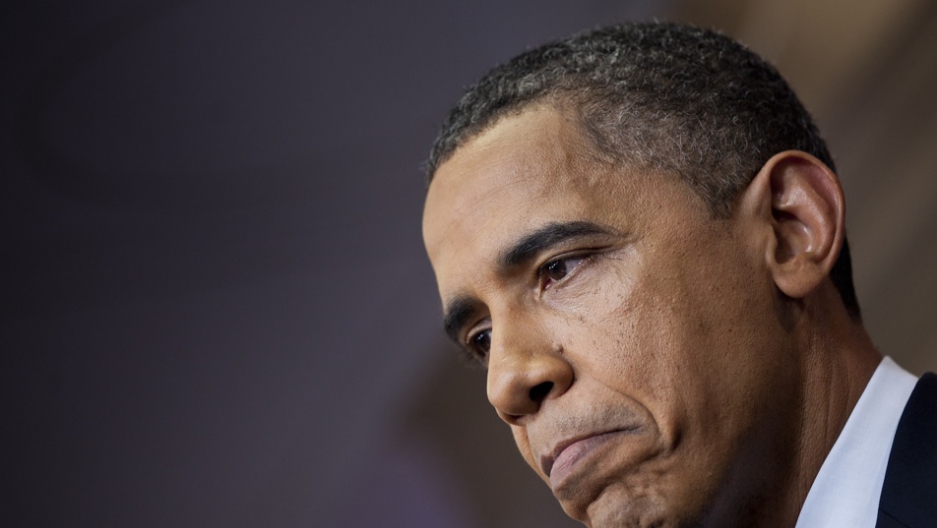 President Barack Obama in the briefing room of the White House July 22, 2011 in Washington, DC. Obama spoke about the breakdown of debt ceiling negotiations with Republican members of Congress.
Credit: Brendan Smialowski
Share

That was apparently the case yesterday for White House press secretary Jay Carney.

At an hour-long grilling at the White House, President Obama's spokesman faced a series of difficult questions about what his boss was doing to help end the crisis over the U.S. debt ceiling.

Here's how the New York Times described the scene:

(Carney) spoke repeatedly but without specifics of private conversations and nonstop meetings involving administration officials “up to the highest levels” — White House shorthand for the president. Finally, exasperated, he asked whether reporters expected “a President Bartlet moment” — say, a march up Capitol Hill to whip Congress in line, à la fictional president in “The West Wing” television series.

Carney isn't the only one feeling frazzled at the moment as a fractured Washington, D.C. faces a looming Aug. 2 deadline before the Treasury says America will default on its debts.

House speaker John Boehner is now also feeling the heat, using a mix of profanity and pleading to cajole recalcitrant Republicans to back his plan to end the crisis.

Of course, the outcome of this ongoing debt drama has a decidedly political flavor. President Obama is likely to be reelected next year — or tossed out of office — based on what the U.S. economy does between now and then.

A U.S. default and the cascade of potential economic nightmares that event could trigger — higher interest rates, a U.S. and global markets collapse, a downgrade of U.S. credit worthiness, fiscal handcuffs to assist the 14.1 million Americans now out of work, to name just a few — raises the stakes for a leader who was elected three years ago to fix a very troubled economy.

And right now, those economic signs are not good.

So what would President Bartlett do?

Dramatically read the lines of whatever script writer Aaron Sorkin handed him, of course.

President Obama has a much more difficult task: dealing with reality.

For a smart take on how Republicans and their beltway allies are attempting to point a finger at Obama, see David Case's latest.

And for running coverage of this ongoing debt story, check out this live blog by our friends at Business Insider.