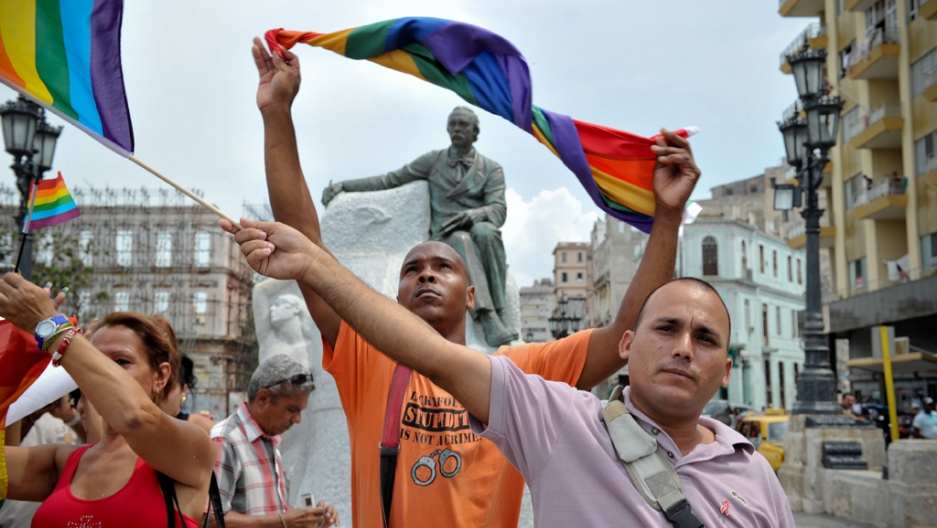 HAVANA, Cuba — There was no mention of it in the pages of Granma, the Communist Party newspaper, but when word came that Cuban authorities were considering the legalization of same-sex civil unions, it was a cause for quiet celebration here.

The announcement was made by Mariela Castro, daughter of Raul Castro and the director of Cuba’s national sex education center, during an interview with Spanish broadcaster Cadena Ser earlier this month. Castro, the island’s leading gay rights advocate, said Cuban authorities are already studying the proposal in preparation for the upcoming Community Party conference on Jan. 28.

“This is a historic opportunity, and I think we’re close to having draft legislation,” said Castro, who also revealed in the interview that gay Cubans can serve in the military. “We’ve been working on this issue for a long time, with a lot of activism. We’re starting to see results and a political solution.”

Certainly the recognition of same-sex civil unions would be a landmark achievement — for Mariela Castro and the island’s gay rights activists. But it also prompts the question: Why has it taken Cuba so long?

After all, six other Latin American nations already recognize same-sex civil unions: Uruguay, Colombia, Ecuador, Brazil, Argentina and Mexico (in certain states). Why then is Cuba, a largely secular society where left-wing politics have dominated for 50 years, still slow to grant full legal equality for gays and lesbians? As Castro told the interviewer, “A socialist society can’t be a homophobic one.”

But it has been one in the past.

In the decades following Fidel Castro’s 1959 Cuban Revolution, gay Cubans endured various forms of harassment, and many in the late 1960s were sent to military labor camps to be “rehabilitated” by grueling agricultural work. The socialist “New Man” envisioned by Che Guevara was strong, self-sacrificing, masculine — and unambiguously heterosexual.

Several of Cuba’s leading artists and intellectuals at the time, including some of Castro’s fiercest critics, were gay, contributing to perceptions among some Party stalwarts that homosexuals were inherently “subversive” or “counter-revolutionary.” Acclaimed Cuban writer Reinaldo Arenas, who fled the island in the 1980 Mariel boatlift, was a case in point.

Much has changed since then. Cubans now march in government-sanctioned gay pride parades each year, and the state has even begun offering a limited number of sexual reassignment surgeries to transgender Cubans at no cost, in keeping with the spirit of the island’s socialist health care system.

Yet many gays here remain closeted about their sexuality. There are no designated gay bars, and a macho-male culture that either mocks or rejects homosexuality remains deeply engrained, just as it is in many parts of North America.

Gay rights activists, led by Mariela Castro (who is not gay herself), have made uneven progress, while continuing to face considerable push-back from a culture that has casual attitudes about sex, but not sexuality.

GlobalPost in Cuba: Condoms not just for sex in Cuba

And while Cuba’s Catholic Church is not as powerful as it is in other Latin American countries, it remains a formidable institution on the island and a moral authority for many. It has openly stated its opposition to any move to formally recognize homosexual relationships, even if its protests have been quieter in recent years.

When the Cuban government screened the film “Brokeback Mountain” on national television in 2008, church spokesman Orlando Marquez wrote “I respect homosexual individuals, but not the promotion of homosexuality. We’re going down a dangerous path when our own state institutions promote programs that undermine the foundations of our society.”

“While homosexual behavior isn’t new,” he wrote, “the international agenda that promotes homosexuality at all levels is.”

Marquez, who is also the editor of Palabra Nueva, the church’s magazine, declined to comment on Mariela Castro’s announcement, referring inquiries about the Church’s views to previously published statements opposing same-sex unions, including declarations on the subject by the Vatican and Cuban Cardinal Jaime Ortega.

In Cuba’s gay community, the reaction to Mariela Castro’s announcement has been enthusiastic, but also mixed. Ailec Garcia, 32, said that while her partner of seven years was eager to formalize their relationship, it wasn’t a priority for her.

“It’s hard to get excited about it when you still live with your parents and can’t think about having a house of your own,” Garcia said, explaining how Cuba’s miserably low salaries and acute housing shortages make sobering realities of many couples’ domestic aspirations, whether they’re gay or straight.

Castro did not go into detail about what legal benefits the unions might bring. But Cuba is also a country where the practice of marriage has also been in dramatic decline and many heterosexual couples go unwed, even after they’ve had children, since they can’t afford to have a wedding and would derive few legal benefits.

Still, Garcia said, the legalization of same-sex civil unions would carry enormous symbolic importance for the country. “We still have a long way to go toward eliminating machista attitudes and taboos,” she said. “But it would be a huge step forward.”